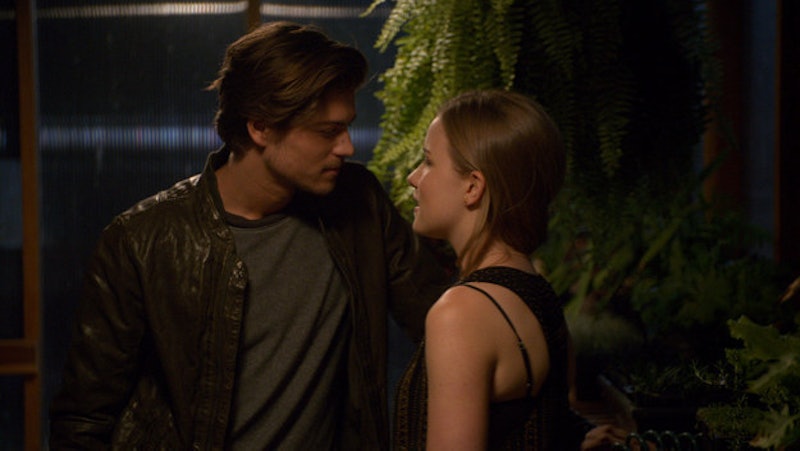 What happens when you turn a horror movie franchise into a weekly television show? It's a question we're all dying to find out with MTV's brand new summer project, the Scream series, which premieres on June 30 at 10 p.m. (ET). I'll admit that I was extremely skeptical about the whole project at first. I mean, for starters, the show isn't even taking place in Woodsboro and the storyline won't center around Sidney Prescott. How is something like this even going to work? But now that I've gotten a look at the latest Scream trailer, I'm beginning to get pretty stoked about the whole thing. (What? I'm a sucker for a good murder series. Don't judge me.)

Sure, it may be lacking the star power that its fall (albeit, superior-looking) counterpart Scream Queens has at its disposal, however, that's not to say that Scream can't bring its own unique murder-y flare to the table. But just in case you're afraid that your screams will be out of annoyance rather than delighted terror, I'm here to try and persuade you to at least give this project a shot. Because even though it's clearly going to stray pretty far from the original, that doesn't necessarily mean it will be any less enjoyable to watch unfold. So without further adieu, here's why you should definitely be tuning into this killer series this summer.

It'll Inspire You To Re-Watch The Movies

The characters may be different, but that won't stop you from feeling nostalgic for the original franchise once a little blood gets spilled. So why not go back and remember what made you fall in love (or is it fear?) with this storyline in the first place.

There's Bound To Be New Catchphrases

Ones that you'll never be able to get out of your head, even if you want to.

Not To Mention, An Updated Version Of "The Rules."

You may want to take a few notes. Just in case.

Your Horror Senses Will Be Heightened

The movies may not be scary to you nowadays, but back when they first came out you better believe you were triple checking that your doors were locked before heading to bed at night. Odds are that this modern-day version will deliver a whole new set of nightmares and give horror fans the thrill they all crave.

It's Guaranteed To Make Fun Of Itself

Scream was known for poking fun at itself, almost as if it was giving the audience a not-so-subtle wink. And it seems the TV version has every intention of keeping that tradition alive, which is made all the more evident by this particular line in the trailer: "You can’t do a slasher movie as a TV series." I see what you're doing there, writers, and I'm into it.

You Can Find Hidden Easter Eggs

Just because the storyline is different doesn't mean the writers won't occasionally sneak in a few little nods toward the franchise from which it's named. You and your friends could even make a game out of it and see how many easter eggs you can spot throughout each episode. Whoever wins gets a new set of steak knives. Or, you know, something less creepy. (I don't know what the right prize for something like this would be.)

It'll Give You A Whole New Appreciation For The Movies

So even if the show turns out to be awful, we'll all, at the very least, be able to look back on the slasher franchise with even more pride than usual. Because if there's one good thing about failed remakes, it's that you learn to fully appreciate what you already had.