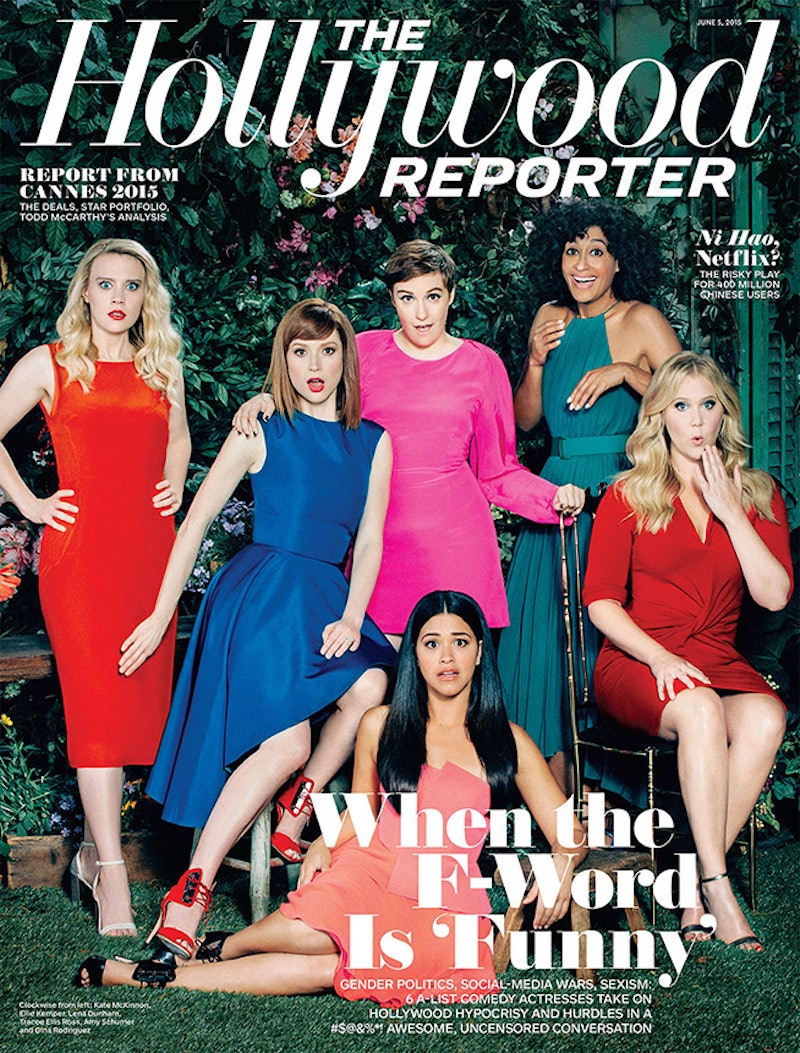 If you're wondering where the women in late-night television are, here you go: it turns out, instead of being on late-night television, the contenders are at a roundtable being asked why there aren't more women on late-night television. "Because we get our periods at night," Amy Schumer input, sarcastically, at the Hollywood Reporter roundtable for Emmy-contending comedic actresses. The panel, which takes place with a different group of women annually, consisted of Schumer (from Inside Amy Schumer), Lena Dunham (from Girls), Gina Rodriguez (from Jane The Virgin), Kate McKinnon (from Saturday Night Live), Tracee Ellis Ross (from Black-ish), and Ellie Kemper (from The Unbreakable Kimmy Schmidt) discussing everything from Hillary Clinton to Twitter trolls in an intelligent, brilliant, and hilarious fashion — as well as, most importantly, the lack of women in late-night television.

So, what was the actual reason the badass ladies came up with for why there aren't any women on late-night television? Dunham, as per usual, jokingly put it in amazing terms: "When Letterman announced his retirement, I tweeted that [Parks and Recreation actress] Retta should replace him, and 10,000 people were like, "I would kill to see that."... Les Moonves is asleep in a cave somewhere far away."

For those not in the know, Les Moonves is the CEO of CBS, the most recent network to see a late-night television host shuffle with David Letterman leaving The Late Show. Although Letterman's successor seems promising — Stephen Colbert ofThe Colbert Report is set to step in on Sept. 8 — there's been major chatter (even from sources like Letterman himself) about the fact CBS didn't replace Letterman with a female host.

Kemper, who rose to fame as Erin on The Office and had a watershed moment with Netflix's The Unbreakable Kimmy Schmidt, boiled it down to the truth: "But it's back to that thing — until you show a new formula can work, people are too scared to take a chance." Sadly, this does seem to be the reason why there's such a lack of women on late-night television: It has rarely been done in the past, and, often times, networks are afraid to take a risk if they're unsure about the payoff. After the late-night television wars of 2010, which saw hosts shuffling around The Tonight Show and Late Night, networks have been even more cautious with their choices — an unfortunate reality, because failing to consider women for shows like The Daily Show, The Late Show and The Colbert Report is embarrassing.

Schumer stated when the women were asked why they don't think their opinions are being considered for replacements:

I think people hate women. I don't think they want to hear a woman talk for too long. A lot of people project their mom yelling at them. My [career] has been about tricking people into listening. I'm not saying all men hate women, but there's such an aggression.

It's a sad reality, especially because there's a frenzied reaction not only from Hollywood, but from the public, when these coveted and rare late-night spots open up. When Jon Stewart announced he was leaving, many of us (myself included) immediately set our hearts on Jessica Williams being named as his replacement. At 25, she's one of the youngest correspondents in the history of the show, and has had several astounding segments that are unapologetic and bold. A black, young woman as the host of The Daily Show would have been an amazing step forward for women in television. However, Williams — though flattered — commented of the rumors that she just wasn't ready to take on the role, which is fine — the role should, of course, only go to a someone who actually wants it, male or female.

But what about the women who would have wanted the role? While I'm happy that Trevor Noah is taking over The Daily Show, demanding a woman on late-night television in no way diminishes all that he's accomplished or is going to accomplish — late-night television needs female comedian voices to remain culturally relevant, and that's not something that should be ignored at all.

So what to do about this issue? The moral of the very, very tired story at this point is: there needs to be more room for women in late-night television. And now that hosts are locked down as replacements for the classics of late-night, it's becoming more and more obvious that new formats need to be considered to make room for women, instead of these very funny, very capable, very talented women just waiting their turn for another 40-something years until these new late-night hosts retire.

After all, Netflix, HBO Go, Hulu Plus and other formats are thriving right now; why are we relying on the network execs of the world to give women visibility after dark?