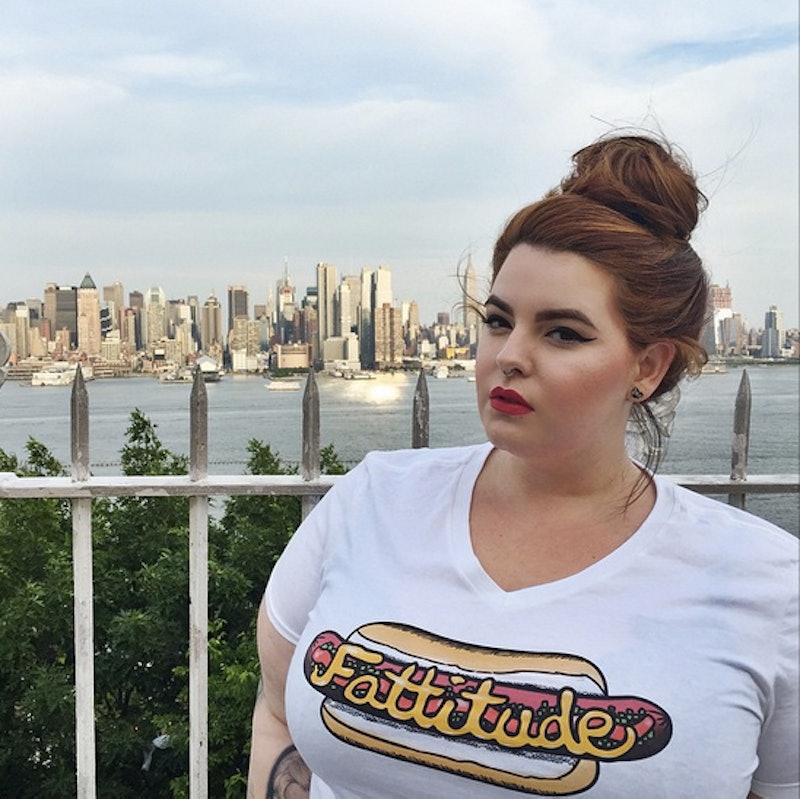 It was a glorious day for plus-size women (and women of all sizes, actually) when Tess Holliday covered People Magazine two weeks ago. But, unsurprisingly perhaps, not everyone sees her rise to modeling stardom and her overt challenging of society's beauty perceptions as lasting or even good things.

For one industry insider within the plus-size market, Tess Holliday is seen as a "freak show" and a current spectacle that won't last. An anonymous but apparently renowned plus-size modeling agent's interview with Business Insider was published last week, and her comments left me less than satisfied over the issue of size acceptance in the industry.

The agent, whose comments were published under the pseudonym "Claire," had the following to say about Holliday:

I doubt Tess Holliday will get much more work than the Yours campaign she has just shot. Her agent has been very savvy from day one about using social media to drum up interest in her girls, and to win clients. But again, I think the much bigger sizes don't have staying power. It is a freak show. The buzz will die down again.

Holliday is as much about the attention she brings from her Twitter/Instagram account for the client than just her.

To me, as much as I'm not about body shaming and am about acceptance, Holliday is not a healthy size and I think it does encourage those who battle with weight to just say "f*ck it" and not take care of themselves. It's not a popular attitude, but it's my humble opinion.

I've seen how the seasoned and popular girls work out and take care of themselves and it's inspiring stuff. They will never been a [U.K.] size 10, but they are a glorious and healthy and toned [U.K.] size 16. Prime examples are Laura Wells and Robyn Lawley. Granted there are a lot of bloggers out there like Holliday who are [U.K.] size 20+ and write about fashion and acceptance, and good luck to them, but I'm doubtful it they will ever stick in the mainstream long term.

According to Claire, "plus-size" modeling should have a limit. (Side Note: This doesn't bode well for her as a self-proclaimed proponent of size acceptance and body positivity.) While I'm not denying her expertise in the industry and her knowledge of what currently has the ability to be promoted and what does not, she doesn't seem to understand the true meaning of body acceptance in its purest form: That all bodies have intrinsic worth to them. All bodies are beautiful and deserving of respect.

To Claire, Tess Holliday is "not a healthy size," although, of course, she does not take into account that she doesn't know Holliday intimately. In reality, she doesn't actually have the knowledge (and therefore the right) to proclaim Holliday unhealthy. It would seem that her definition of a "good" plus-size model is a "glorious and healthy and toned U.K. size 16," and that all others are inferior as far as plus-size models go.

Though it's still a step in the right direction that Claire, a recognized agent, considers a U.K. size 16 (U.S. 12) to be promotable and suitable for modeling (it's better than thinking only models under a size U.S. 4 are suitable, I suppose), her comments indicate that she's unfortunately still operating under the exact mindset that models like Holliday are working hard to eliminate.

As far as her own plus-size agency goes, Claire told Business Insider:

Many girls would come in who were clearly unhealthy and think they could model. We have to be seen as promoting health. Some girls who are 5'10" and a U.K. size 16/U.S. size 12 could never be a U.K. size 10/U.S. size 6, unless they starved themselves. That is not what we wanted to encourage.

Limiting the potential of women of any size is an idea that has to go, however long it takes. As Claire noted, she doesn't want women to starve themselves to get to a certain "promotable size." But she's unfortunately still perpetuating a body shaming line of thought for women who might be a size comparable to Tess Holliday, but who feel pressured to rapidly get down to a size 16 — in this agent's world — to model.

The insider obviously hasn't negated the fact that Tess Holliday has made a splash in the fashion industry, but it's her casual assertion that fuller-figured models gaining traction is only a "phase that will die down" that bothers me. Claire even acknowledged that there are many other bloggers and advocates in social media for size 20+ and beyond, who champion the fight for body acceptance. She just doesn't believe that they will make any difference.

I'm not going to put down the work Claire has done for the plus-size industry (not that I could anyway; she's remained anonymous). I don't know her, and I can't qualify her influence against her statements in this interview; but I certainly don't like to be seen as just a part of a "buzz" that "will die down again." I have to believe that models like Holliday aren't just doing what they're doing to gain fame and promote themselves.

These women are working to uplift those who have felt just as oppressed and stigmatized as they have, and to empower anyone else to know that they can do whatever they want, too. Even if it is modeling in an industry that has for so long marginalized an entire group of humans. What I think Claire fails to see is that Tess Holliday isn't just one model: She is one of the many faces of a movement that continues to gain traction while declaring #effyourbeautystandards to the industry and our culture as a whole.

It's Claire's perception of health within the plus-size community that is deeply flawed and troubling, however (and also deeply boring at this point). Claire claims that her own agency cannot promote being "unhealthy," which she perceives as synonymous with "fat" and "untoned" (welcome to Contemporary Fat Shaming 101, y'all).

The great thing about models like Holliday is that their appearances aren't doctored to fix pre-supposed "flaws." You see cellulite in all its bumpy glory. You see rolls in their natural, squashy states. This is old news, but it's clearly worth reiterating: You cannot judge someone's "health" by their cellulite and bumps. You cannot judge someone's "health" by how smooth their legs or arms are. And even if you could — even if Claire had a record of Holliday's health at her disposal, and we learned that Holliday is "unhealthy" according to mainstream medical standards, she'd still deserve respect. She'd still have worth. And she'd still kill the modeling game.

If seeing Tess Holliday on a cover of a magazine helps a woman to acknowledge her own beauty and stop the incessant obsession with becoming thinner for a "certain kind of beauty's sake," then that's a job well done. It's honestly no one's business if someone puts effort into their health or not, because we're all free to make that choice on our own.

Ultimately, the critics can belittle this movement into a "phase that will soon pass" all they want, but I believe many of you are with me when I say we'll still be standing here tomorrow, the next day, and all the days after that — cellulite, smooth skin, chunky thighs, thigh gaps, double chins, small butts, big or flat bellies, and all. Because, you know, there are some of us who actually believe that all bodies are beautiful.

More like this
Instagram & Facebook May Finally Lift Their Notorious Nudity Ban
By Allie Fasanella
Selena Gomez Dismissed Trolls' Comments About Her Body After The Golden Globes
By Stephanie Topacio Long
Phoebe Dynevor Serves ‘Bridgerton’ Underboob In Stunning Floral Gown
By El Hunt
You're Aging Your Body Too Quickly If You're Not Doing Any Of These Things
By Bimini Wright
Get Even More From Bustle — Sign Up For The Newsletter
From hair trends to relationship advice, our daily newsletter has everything you need to sound like a person who’s on TikTok, even if you aren’t.