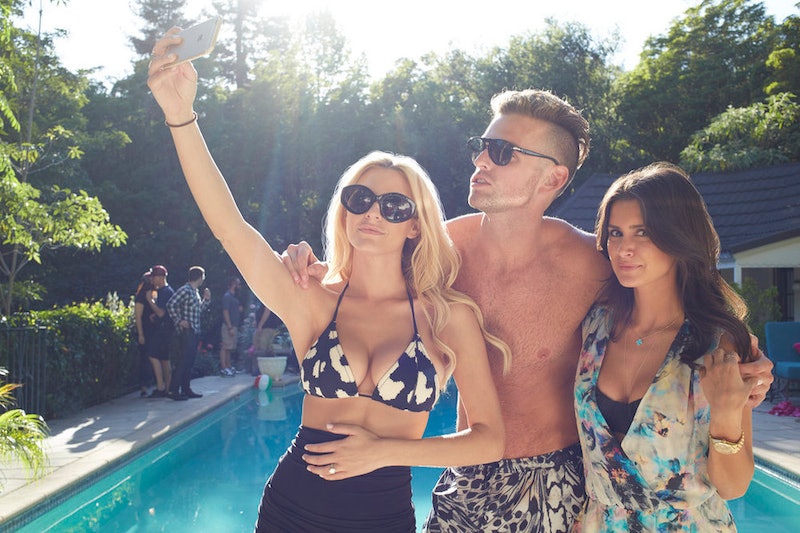 The one thing that #RichKids of Beverly Hills is swimming in is rich kids, even if their definition of "kid" is pushing it with most of the cast in their mid to late 20s. But, just how much is the Rich Kids of Beverly Hills cast worth? They're rich, but how rich? And, could any of them be called self-made millionaires? The short answers: very, and not really. But, the long answers are more interesting. Some of the Kids have parents who are famous, while others are descended from highly successful business execs only known to people who read The Economist. Others are a combination of hardworking and lucky — it's a lot easier to start a lucrative career when you start out as a wealthy kid from LA with a great education and supportive parents. And, while the show likes to play up how much partying, lounging around, and complaining this cast does, they are all also working in some capacity... but, still, most of their net worth is due to the money they'll inherit.

Already, in just the Season 3 premiere, the Rich Kids of Beverly Hills are back at it: New cast member Taylor and EJ bonded over the very relatable experience of having super famous dads. Meanwhile, Brendan shopped around for an engagement ring for Morgan, planning the perfect proposal, complete with a four-carat gem. It's vaguely horrifying how much money the #RichKids have to mess around with, but at the same time, it's very addictive to watch, like the wish fulfillment of what my 16-year-old self would do with millions of dollars. Here's how their bank accounts stack up:

Dorothy's dad is so wealthy that Forbes has Roger Wang's net worth measured at $4 billion. That's billion with a "B." That type of financial security has given Dorothy the freedom to take her time deciding on a career path, as she, herself, is worth $10 million. During Season 1, she was working as a real estate agent, but during Season 2, she moved on to selling jewelry. Meanwhile, she still describes herself as #FUNEMPLOYED all over her Facebook... so it looks like she isn't making billions on her own just yet.

FashionNStyle claims Morgan is worth anywhere between $1 million and $5 million. That's a pretty big range, but that's because Morgan hasn't really established her own independent wealth yet. Blogs need to become huge if they're going to rake in millions, and Boobs and Loubs seems like more of a hobby and occasional calling than a forever business idea.

Roxy's storyline in the first season was all about how she was "cut off" by her parents, forcing her to get a job. Now, she works as an interior designer and designs candles. CelebrityNetWorth puts Roxy's worth at $100,000, which is nothing to scoff at. Her father, Sam Sowlaty runs Acuprint, a printing company. It's hard to figure out just how much the Sowlaty family is worth, but every site lists him as a "mogul," so I'm sure he's worth lots.

Brendan is probably the closest thing to a self-made man on this show. Even though by his own admission in the pilot, his parents did support him for a long time, he now has his own career as a real estate agent working for Mauricio Umansky's company. TheRichest claims Brendan is independently worth $500,000, which seems about right — high, but not crazy high. After less than ten years of work, building a net worth of half a million is pretty impressive... even if his parents helped set the field.

EJ's father is Earwin "Magic" Johnson Sr., but even as the youngest member of the Rich Kids cast, he's already shown his dad's knack for being a charming, well-loved celebrity. (He's made an appearance on basically every E! show.) Magic Johnson's net worth is estimated at $500 million, and that includes his ownership of the LA Dodgers baseball team. TheRichest claimed EJ is personally worth $2 million on his own.

Jonny isn't from the same famous background as the rest of the cast, but his Hermes budget is clearly very high, so he's used to luxury. His worth is estimated at $800,000, which was surprising at first compared to some of the others. But he's actually an experienced musician, and has written songs that he credits as having been "performed on several networks, including MTV, VH1, and CBS." Guess that pays well.

The newest member of Rich Kids of Beverly Hills Season 3, Taylor has the parentage to fit in — she's the daughter of the actor David Hasselhoff, who's worth over $100 million, and she's following in her dad's footsteps. TheRichest also estimates that Taylor is worth $1 million, from not just what she's earned from her family, but also Bellus Magazine, where she collects and celebrates art, music, and fashion.

All of the Rich Kids of Beverly Hills are worth a ton of money, but the real key is which ones can take ownership of that early success and turn it into their passion.