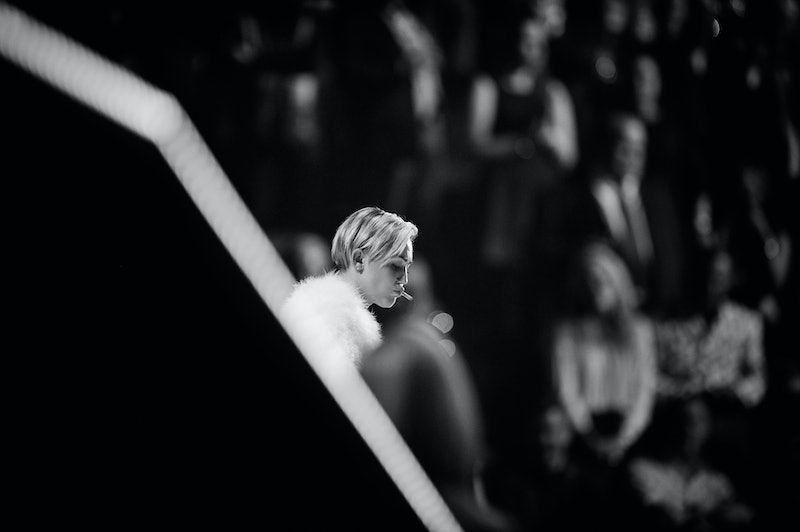 Well, we all saw that coming. After Miley Cyrus lit up a blunt while performing at the MTV European Music Awards, thrilling the audience and shocking possibly no one, the station made the meaningless but parent-friendly decision to censor the singer's drug use. MTV edited out the act from the American broadcast of the award show, so now the world will never know that Cyrus smoked weed on-stage — despite countless news reports and videos already acknowledging that it happened. (Click here to see one of those videos.)

While the censorship does seem pretty silly, seeing as by now, the entire universe hears about Cyrus' actions no later than a few minutes after they occur, it's an understandable PR move for the network. Weed may be decriminalized in Amsterdam, but to many American parents thinking they were watching an innocent little award show with One Direction and Bruno Mars (seriously, what century are they in?), Cyrus' on-stage antics might not go down so well. In order to save face and prevent thousands of angry "my 10-year-old was scarred for life!" letters, MTV needed to take action.

To the rest of us, though, there's no denying it — Cyrus smoked on-stage (gasp!) Really, though, it's not that big a deal. She was in Amsterdam, and no one could've expected the star, who has openly discussed her love for marijuana many times, not to partake. And besides, compared to her typical on-stage controversies, this is nothing. We should be thankful that all she did was smoke. It's a lot better than riding a wrecking ball naked or twerking — well, actually, she did that, too. Dammit, Cyrus.