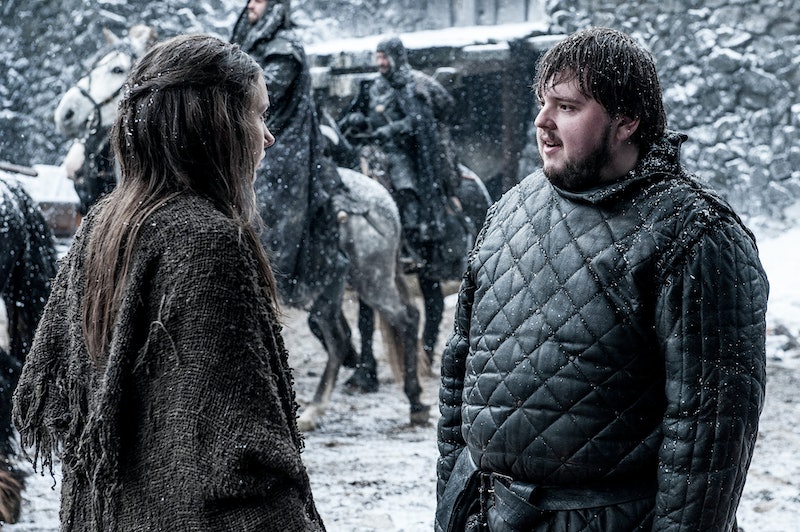 No one should ever underestimate Samwell Tarly, that's my advice to anyone grappling with the many Game of Thrones theories floating around these days. Let me set the record straight, if you think Sam is going to die on Game of Thrones, you're wrong. At least, I hope you're wrong. I'm holding out for Sam the Slayer to survive it all and be the last person standing when winter has come and gone. I know that might sound like a pretty bold statement considering the fact that Sam doesn't seem too much like an actual slayer (not to mention his slaying grand total comes down to one), but if you take a look at the cold hard facts it makes a lot of sense. He's killed a white walker. Sam and Gilly are in love (basically) and he's saved her countless times. He essentially got Jon elected Lord Commander. At this point Sam could die in the next episode, and still be considered one of the heroes of Game of Thrones.

He could die, that is, but I think (and I am crossing all fingers and toes that I am right) that Sam will end up outliving everyone. I think he'll make it through winter and the war with the white walkers, plus the war for the Iron Throne (which you know if going to be rough). When all is said and done I think he will use his education and training to chronicle the recent history of Westeros. He could call it: A Song of Ice and Fire (too on the nose?).

If we're looking at the books, by this part in the show Sam should be on his way to becoming a maester. We haven't seen him since A Feast for Crows when Gilly is sent off to Horn Hill (a plot I hope the show skips; I like having her around), and Sam continuing to make his way to the citadel to study up for maester-life. Goodness knows the show could go a million different ways with him, but with the exception of a few smaller details (like how he killed that white walker, and everything about Mance Rayder's baby) they've actually stuck pretty close to the books. I think this is an excellent sign for his survival and continued education.

Look, I know that Game of Thrones kills off fan-favorites all the time. I know that the books are brutal and the show is taking it to the next level. In this world there are no guarantees. But, I think there would be a beautiful simplicity to having, at the very end of it all, the most unsuspecting person be the last man standing. The man no one thought would survive training on the wall be the man to live and tell the story to others. It would also be nice if Tyrion could survive, but I feel like now I'm just getting greedy.

More like this
‘The Simpsons’ Will *Finally* Address How They “Predict The Future”
By Sam Ramsden
The 'PLL: Original Sin' Creators Say A’s Identity Will Be “Very Clear” By The Season Finale
By Alyssa Lapid
'The Sandman’s Ending Is A Departure From Neil Gaiman’s Comic Book Series
By Kadin Burnett
UK Viewers Are Now Able To Board Seth Macfarlane’s 'The Orville'
By Frances Stewart
Get Even More From Bustle — Sign Up For The Newsletter