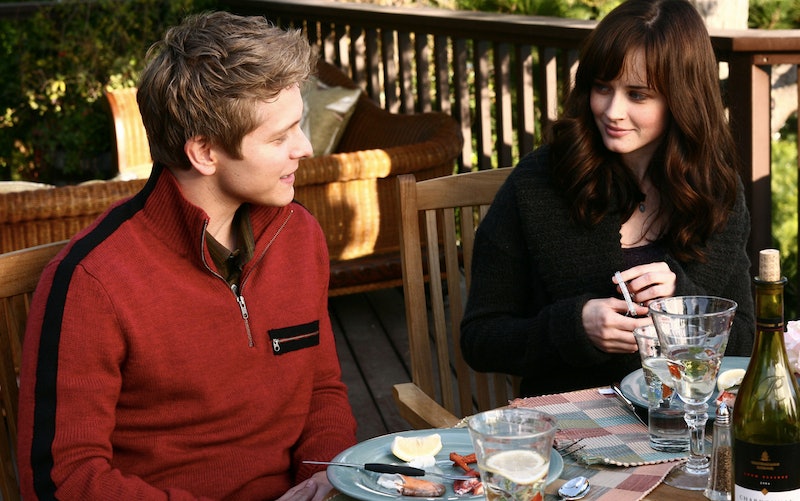 The battle of which Gilmore Girls hunk was Rory’s best boyfriend is one of the most controversial and contested questions of our time. Is her OTP (that’s one true pairing, for those of you not as well-versed in Internet fan speak as I am) Dean Forrester, the lunky-but-lovable first love? Or perhaps the intellectual bad-boy Jess Mariano? Or Rory’s college man, rich playboy-gone-soft Logan Huntzberger? Well, I’m here to settle this battle once and for all, folks. Logan was Rory's best boyfriend on Gilmore Girls . Now before you start hating on me, hear me out.

Her best boyfriend is definitely not Dean, because Dean was jealous and possessive and cheated on his wife. Not really the kind of guy you want to keep around. Jess, though brooding and sulky and exactly the kind of guy I was into when I was 17, also loses. Jess’ bad-boy thing is cute when you’re an adolescent, but when you realize what it’s like to be treated nicely in a relationship, you drop all the Jesses of the past.

This analysis leaves only one man standing: Logan Huntzberger. Sure, they had some bumpy times in the beginning (I think that was mostly when they only wanted to be sex buddies), but Logan redeemed himself quickly, even proposing to her at her graduation party. Matt Czuchry, who played Logan, recently said that he felt OK about Rory rejecting Logan’s proposal, but I think that’s just because his heart is broken. (Obviously, Czuchry and Logan are one in the same.)

But, if you still don't believe me, here are the times when Logan proved that he was the one for Rory.

1. When Logan Gifted Her A Rocket

Logan left for London in the seventh season, and in his wake he left Rory a model rocket ship as a gift. Rory was perplexed at its meaning, but when Logan’s intentions were revealed, it was totally swoon-worthy. It’s a reference to an episode of The Twilight Zone called “The Long Morrow” in which an astronaut falls in love with a woman before he is sent into space. Because she will be 40 years older when he returns from his expedition (he’ll be in suspended animation), he chooses to age naturally in order to be with her. She, on the other hand, put herself in suspended animation so she could be with him when he returned. That’s love, and that’s what Logan wanted to communicate to Rory.

2. When Logan Turned His Back On His Family For Rory

It’s no secret that the Huntzbergers were not the nicest to Rory. Logan’s mom basically called Rory “white trash,” and Logan’s dad told Rory she wasn’t cut out for the journalism business. Logan showed just how much he cared for Rory when he stormed out of their family dinner, pretty pissed off at the insinuation that she wasn’t good enough to be a Huntzberger.

3. When Logan Jumped With Rory

During the Life & Death Brigade stunt, this couple established their trust, because when Rory jumped, Logan jumped, too.

4. When Logan Revealed The Truth To Lucy

I may not be popular for this opinion, but when Logan dropped the truth that Marty and Rory had actually known each other for years, I was happy. Rory and Marty were acting like complete idiots in not revealing their past friendship to Lucy, and even though Logan didn’t unveil it in the nicest of ways, everyone was better off for it. Tough love, people.

Rory and Logan were doing the whole “friends-with-benefits” thing for a little bit before they officially became a couple. When Rory figured out that she was developing feelings for Logan, she went over to his apartment to break it off — she knew his playboy ways wouldn’t mess with a relationship. But Logan, turning over a new leaf, basically refused to be dumped, and he told Rory that he wanted to be her boyfriend. Commitment is so hot.

6. When Logan Was There After Richard’s Heart Attack

Getting along with your significant other’s family is a big part of a relationship, and when things happen in the family, you have to be there for them. After Rory’s grandfather had a heart attack, Logan was right by Rory’s side, moving cars, ordering fish, and being as helpful as possible in this crisis.

7. When Logan Asked Lorelai For Rory’s Hand In Marriage

Personally, I’m not really into this weirdly patriarchal tradition of asking to marry a daughter, but I did like that Logan talked to Lorelai about the proposal before it happened. Why? I think Logan recognized how important Lorelai was to Rory, and he needed her to know this big life news before it happened.

I mean, it’s a Birkin bag. Even in pink, I’d probably still take it.