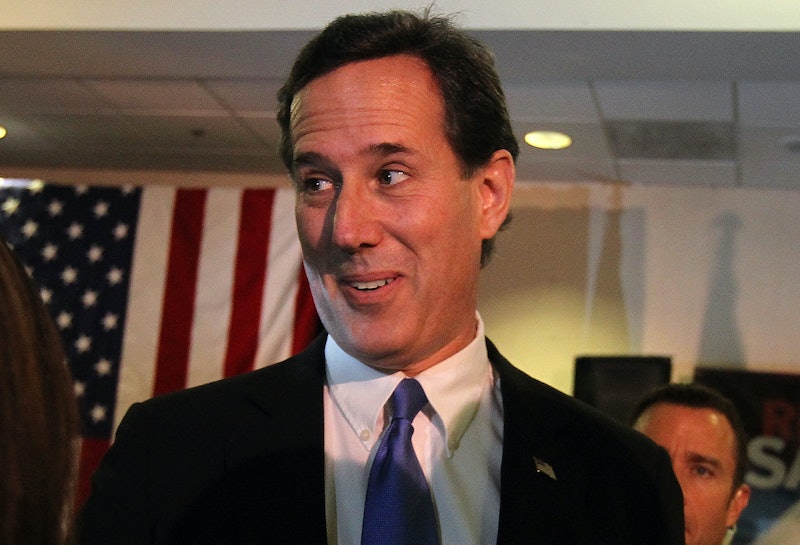 Now that he's formally announced his campaign for the GOP presidential nomination, former Pennsylvania Sen. Rick Santorum's stance on major issues will come under scrutiny. The "Fighting for Conservative Values" section of his website describes Santorum's positions against abortion and his opposition to most embryonic stem cell research, and it also points to his support for the 2005 "Workplace Religious Freedom Act," which would have required companies to accommodate employees' religious observances in the workplace. None of these come as any great surprise, as Santorum has long branded himself as a conservative Christian. But the latest iteration of his website doesn't specifically detail Santorum's position on birth control, a topic on which he has been outspoken in the past. In 2006, Santorum said he believed birth control was "harmful to women" and harmful to society, since, he said it promotes sex outside of marriage, according to ABC News.

I'm not a believer in birth control and artificial birth control. I think it goes down the line of being able to do whatever you want to do without having the responsibility that comes with that.

His position shifted in 2012, ABC reported, when he said he would support doing away with certain parts of the federal program that provided funds to Planned Parenthood, called Title X. Also in 2012, Santorum was a supporter of the Blunt amendment, which would have allowed companies to decide on "moral grounds" whether or not to offer birth control as part of a health insurance plan, according to Fox News.

The statement about birth control that seems to haunt Santorum was when he said in an interview with the blog Caffeinated Thoughts that he believed contraception was "not OK. It's a license to do things in a sexual realm that is counter to how things are supposed to be." He told Fox News that this was a personal belief "reflecting the views of the church that I believe in."

Santorum later sought to clarify his position, and said his statements about birth control, which he said he and his wife, Karen, do not use, reflected his personal beliefs, and that he would not be an "uber-czar that is going to try to impose that on the rest of the country," CNN reported. Santorum and his wife have seven living children, and one son who was stillborn. Santorum pointed to his record of voting in favor of birth control for women in poverty, despite his belief that abstinence was the better option.

It's not yet clear whether Santorum maintains his previous position against birth control in his current campaign, but his stance against abortion appears to be the same.