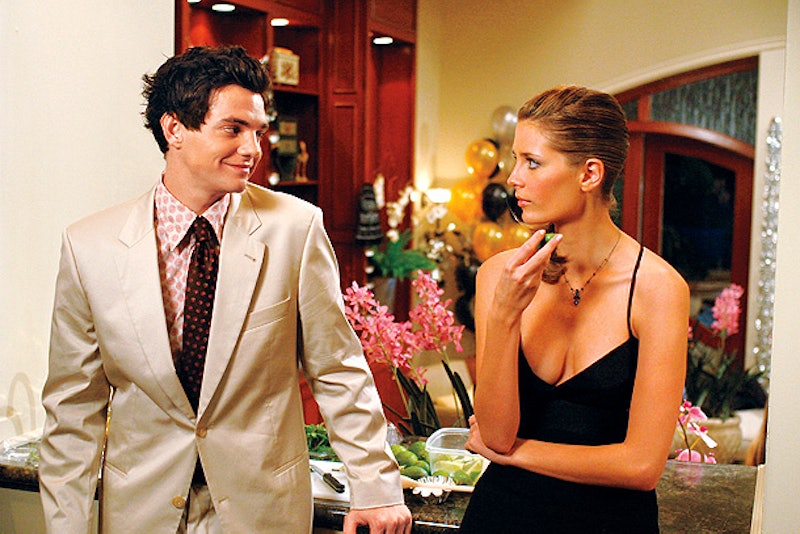 The first season of The O.C. was a perfect capsule of television. It had drama; it had young, attractive people; it had amazing music; and it was totally marathon-worthy (before that was really a thing). There was just one thing that always bugged me about these episodes: The whole “Oliver Trask” character arc. For those of you who didn’t watch (and I don’t know why you wouldn’t, but anyway), Oliver was a character that Mischa Barton’s Marissa Cooper met in the waiting room of her therapist's office. They became fast friends (mostly because they both were going through some dark stuff), but there was something a little off about him. Unfortunately, the only one who noticed this was Ryan, and it (along with Oliver’s constant prying) drove a huge wedge into Ryan and Marissa’s relationship. When it turned out that Oliver actually had serious issues (he pulled a gun on Marissa and threatened to kill himself if she left him), the damage was already done: Ryan couldn’t get over the fact that Marissa didn’t believe him. Personally, I don’t blame him.

Though in my younger years I was firmly against this OTP-destroying storyline, I’ve grown to appreciate it in my old age. One day I just realized that it's pure, soapy television genius. Here’s why Oliver and his standout storyline deserve a shining place in everyone’s Season 1 memories.

If it takes a good actor to act that intensely, Handley deserves an Emmy or three. I mean, Oliver was positively unhinged. Worth noting is that Handley also played an emotionally disturbed/fresh out of rehab character on The CW’s Hidden Palms in 2007, so maybe he just has a very specific type of talent.

Ryan knew that Oliver was a loser from the start, but everyone (including Marissa and Seth) chalked Ryan’s ill will towards him as jealousy and not as something of real concern. Boy, were they all wrong, huh? When it turned out that Oliver was absolutely dangerous, Marissa tried to apologize to Ryan, but why would he take her back when she proved she didn’t trust him?

But It Solidified Luke & Ryan’s Relationship

Remember how I said that no one believed Ryan? Well, that’s a little bit of a lie. Luke was actually the only one who believed Ryan, which is funny considering that they were mortal enemies at the beginning of the series. The water polo-playing jerk-with-a-soft-side also thought that there was something fishy about Oliver, and this helped to solidify the guys' fledgling friendship.

It Made The Best Kiss Of The Series Possible

Even though Ryan and Marissa broke up at the end of all this Oliver nonsense, they still shared one wonderful New Year’s Eve midnight kiss in the episode “The Countdown.” With “Dice” by Finley Quaye playing in the background, this moment is certainly one to remember.

I mean, Oliver has severe mental issues. Who is to say that he didn’t get out of rehab and set out to find Marissa again? Later on in the show, there were a few joking asides made about Oliver’s whereabouts, but dammit, I want to know where he went. I bet he’s just plotting his next move.

Because Ryan and Marissa split up, Ryan was driven into the arms of his childhood sweetheart, Theresa, and at the end of the season, she has a pregnancy scare with (probably) his baby. I’m in the camp that Theresa, so I was OK with Ryan and Marissa not being together if this is where it took him.

Virgin ones, of course, because they were all underage. How fun is that to say? Moooheeetossss.

Where do you think Oliver is, O.C. fans? My theory is that he met up with Kirsten Cohen while she was in rehab and she put out a hit on him for causing so much pain to her family, but that’s just me.