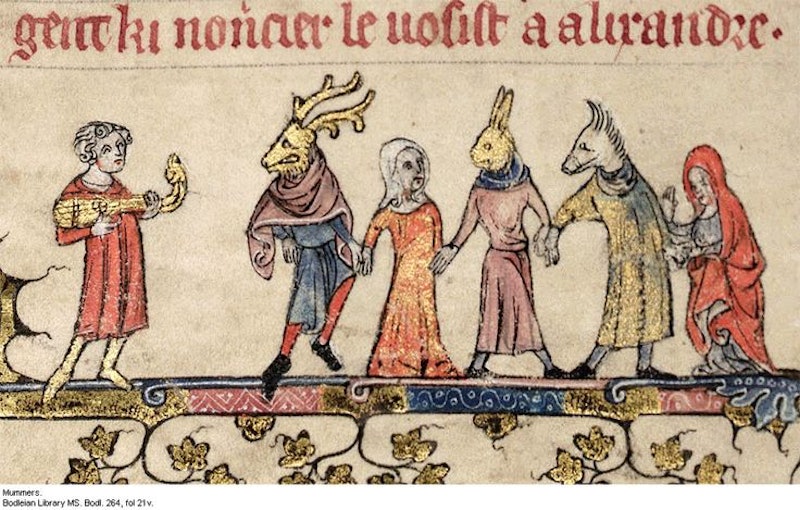 Most of today's penal codes are guided by the idea of "letting the punishment fit the crime" — but when it came time to dole out punishments for crimes in medieval Europe, the philosophy was a bit closer to "let the punishment appear to have been made up out of thin air." In the penal system of the Middle Ages, making humans wear bridles, giving a pig a lawyer and forcing people to carry hot stones were all considered completely legit parts of the law. But despite how deranged most of these punishments sound now, they actually made some sense in context.

Though most medieval punishments now look simply like torture used to extract confessions, at the time, people truly believed that pain could be used to determine a person's guilt or innocence. "Trials of ordeal" were used to prove whether or not an accused person had committed a crime. Evidence was considered secondary to how they fared with the ordeal: if they survived, they were considered innocent, because God was clearly on their side.

Medieval citizens also had a lot of respect for people who endured heinous pain: their calendars were crowded with feast days celebrating the deaths of saints — many of whom were martyred for their faith in truly painful and hideous ways. And furthermore, they believed that brief humiliation was a powerful deterrent against future crimes — more powerful than, say, long-term imprisonment.

So if you committed a crime in medieval Europe, you could be facing down any number of bizarre-sounding punishments — you might be suffocated in a mud bath, or just draped in a white sheet and told to yell apologies at people. Let's take a journey through the weirdest bits of Middle Ages justice, shall we?

1. Apologizing While Wearing A White Sheet

If you'd done something offensive and needed to perform penance for the Catholic Church in the Middle Ages, you needed to be ready to play-act as a repentant ghost. Criminals had to wear a white sheet (presumably with a head-hole cut out of it, though the sources are unclear on this), stand outside the local church while all their friends and family filed in, and beg very loudly for forgiveness regarding their crimes.

The Middle Ages were a ripe time for people who liked to make others look completely ridiculous as punishment for their crimes. In their classic tome Crime And Punishment In The Middle Ages , Albrecht Classen and Connie Scarborough mention a few non-violent punishment methods that would raise eyebrows in the penal system today — primarily, that criminals were forced to wear terrifying animal masks around town or in the stocks, presumably to frighten babies.

The other one they mention? Crime-specific badges. Yep. That might seem like a pretty lenient punishment, but you had to wear it for life — and nobody was going to trust you with anything, if, for example, you showed up for your new job wearing a badge made of two huge red tongues, bigger than your hand, which that indicated you'd committed perjury. And good luck getting a date with that on.

3. Being Thrown Into Water While Tied To A Stool

The ducking stool turned up a little later, during the sixteenth and seventeenth centuries — but it's still worth mentioning, because it is both hilarious and horribly sexist. If a woman did something unwomanly — most often this entailed being a "scold" who told off her husband and caused problems by spreading gossip — she'd be strapped in a chair at the end of a pole, and summarily dropped into the nearest stream or lake...repeatedly. Nothing more womanly than that, right?

The so-called "scold's bridles" are terrifying-looking things — and, you guessed it, they were made to be worn by women who ran their mouths too much. But despite their terrifying looks, it seems they were largely designed for public humiliation rather than actual pain. They are, literally, bridles to be strapped on the head, with bits to be put in the mouth. Some of the bits had spikes to prevent the wearer from speaking, which was pretty fearsome, but others were just heavy and uncomfortable. The "scold" would then be paraded around in her ridiculous headgear for up to 12 hours.

5. Plucking A Stone Out Of Boiling Water

Trials by ordeal were no joke. They weren't the norm — if you stole a bunch of gold and somebody saw you, for example, you'd probably just be hanged, not asked to go through a holy test. But when ordeals were deemed appropriate for whatever crime had been committed, they didn't mess around. Your punishment if you failed? Excommunication from the church, to start with, because God clearly didn't believe in your good name. And that was just the beginning.

There were three types of ordeal: cold water (where sinking to the bottom of a pool indicated innocence, while floating showed guilt), hot water (plucking a stone from a cauldron of boiling water and having the wounds heal within three days was required to prove your innocence), or hot iron (carrying a pound of boiling iron showed your righteousness). If a priest or holy person was accused of a crime, he could ask for a trial by the host, which involved taking the host wafer into his mouth and swallowing it. If he choked, he was guilty.

6. Being Suffocated In Mud

Suffocation as a technique of execution has been around for a very long time. One ancient Roman woman, Fausta, was executed in an overheated bath, and one of the most famous martyrs of Christianity, Saint Cecelia, allegedly had to be beheaded after a suffocation attempt didn't work. But the Middle Ages legal system specialized in one particular type of suffocation: mud, glorious mud.

Being drowned or suffocated in mud seems to have been (thankfully) rare, but in the Burgundy region of France it was a punishment reserved for women who left their husbands. Sometimes suffocation in mud was less a planned punishment than a nasty offshoot of medieval battles, though: historians report many cases of exhausted, armor-laden men drowning in mud on battlefields.

Animals that committed crimes, particularly crimes against humans — like mauling or murder — were occasionally given criminal trials instead of being immediately put down and having their owners punished (as we typically do today). To keep things fair, animals were also persuaded to give some kind of "confession," and tried with the benefit of lawyers. Historian Graeme Newman reported one case where a hangman circumvented this idea and executed a sow without a trial for killing a child, and was immediately punished by the rest of the village and sent packing. No day in court for pigs? Can't have that.

8. Hanging In Cages Until Death

If you were sentenced to death in medieval Italy or England, one particular option for your demise combined both public humiliation and agonizing torture: being hung in a cage in a public place, naked and without food or water, until you starved to death. A fun variant? Being smeared with milk and honey so that you'd be attacked by insects.

9. Having A Metal Pear Poked Up Your Parts

Medieval torture was rare (or at least not often reported), and when it was done, it was pretty straightforward: inflict pain in the easiest way possible, either by poking the victims in hideous ways or restraining them for days. A fourteenth-century chronicler details, with relish, a number of different options for torturers, including having a goat lick the prisoner's feet, hanging people up by one arm, and sleep deprivation. One method, however, stands out as a truly inspired bit of punishment: the Pear Of Anguish.

Classen and Scarborough point out that "to eat an anguish pear" was a French proverb meaning to be held captive or made miserable. The machine itself is a pear-shaped device that was inserted into a part of the body (usually the vagina or anus) and gradually "opened" by turning the stem. It then poppped into several thin, sharp slivers. It was apparently reserved for witches, prostitutes, homosexuals, and people who didn't show outward signs of agony while being tortured. One poor woman, during the Spanish Inquisition, ahd the pear "opened" twenty-six turns, and, unsurprisingly, died soon after.

More like this
25 Quotes About Love To Share During Pride Month 2022
By Madeleine Aggeler and Emma Garza
How To See The Lunar Eclipse On May 15-16, 2022
By Kaitlyn Wylde
Photos Of Boris Johnson Drinking At A Downing Street Lockdown Party Have Surfaced
By Bustle UK
Remember These Ancient Pieces Of '90s Tech?
By Lucia Peters and Emma Carey
Get Even More From Bustle — Sign Up For The Newsletter