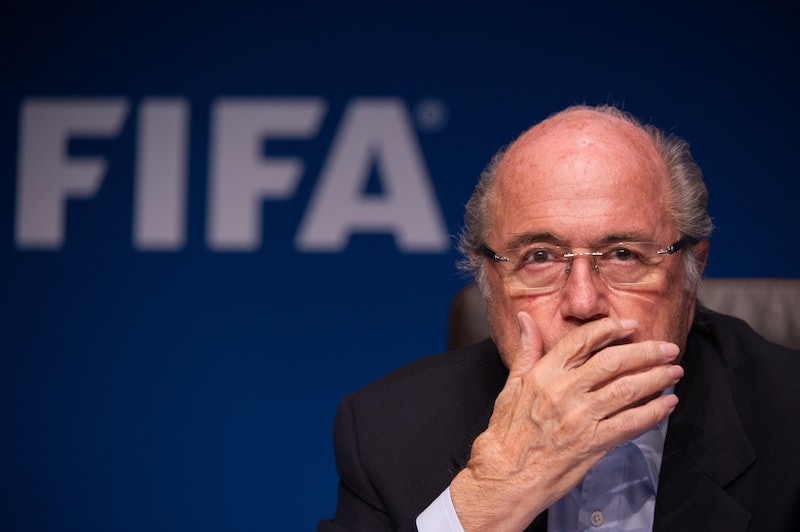 U.S. prosecutors have indicted nine top officials of football’s governing body, as well as five sports business executives, citing “rampant, systemic and deep-rooted” corruption in FIFA’s affairs. Loretta Lynch, U.S. attorney general, said Wednesday that the charges include racketeering, wire fraud and money laundering; seven of the wanted men were seized from a luxury Swiss hotel on Wednesday. Yet one prominent name is conspicuously absent from the list of indicted men. Longstanding FIFA President Sepp Blatter, who has been described in The Guardian as “the most successful non-homicidal dictator of the past century,” has not been charged. But will the FIFA scandal, and subsequent calls for Blatter’s resignation, topple international football’s kingpin?

Blatter has worked at FIFA for 40 years, having begun his career there in 1975 as a technical director. He moved up the ranks, first to the role of general secretary, then to that of president, in 1998. FIFA’s next presidential election is scheduled for this Friday, and The New York Times reported that Blatter is expected to enter a fifth term. According to the Times, a FIFA spokesman has confirmed that the vote will go ahead as planned, despite this week’s upset. On Wednesday, when the arrests were carried out, U.S. prosecutors indicated they might be making more arrests, and would conduct a criminal investigation into the awarding of the next two World Cups (to Russia, in 2018, and Qatar, 2022). The officials declined to comment on whether Blatter would be a subject of the investigation.

As the head of an organization that seems constantly mired in controversy and corruption allegations, Blatter has consistently managed to steer himself out of harm’s way. “A lot of people have asked me why Sepp Blatter wasn’t involved in this seemingly historic day, and the answer is, that’s how true power works,” Alexi Lalas, a soccer analyst and a former member of the United States men’s national team, told The New York Times. “It’s called plausible deniability.” Blatter, for his part, responded to the allegations with a statement Wednesday decrying the “unfortunate events.” He wrote:

This is a difficult time for football, the fans and for FIFA as an organisation. We understand the disappointment that many have expressed and I know that the events of today will impact the way in which many people view us. As unfortunate as these events are, it should be clear that we welcome the actions and the investigations by the US and Swiss authorities and believe that it will help to reinforce measures that FIFA has already taken to root out any wrongdoing in football.

But Blatter’s approach has done little to prevent serious challenges to his leadership in the wake of the arrests. Key sponsors, including Adidas, Visa, and Coca-Cola, have called on FIFA to reform its practices. Visa’s statement, released Wednesday, expressed “profound” disappointment and concern. “As a sponsor, we expect FIFA to take swift and immediate steps to address these issues within its organization,” the company statement read. “This starts with rebuilding a culture with strong ethical practices in order to restore the reputation of the games for fans everywhere.”

Meanwhile, an announcement from the British government more directly called for Blatter’s reign to end, with a statement Thursday advising the president be replaced. “I welcome the investigations that are well under way and I fully support the FA's position that significant and wide-ranging reforms are needed at the very top of FIFA, including a change in its leadership,” U.K. culture secretary John Whittingdale told MPs in a message endorsed by Prime Minister David Cameron, adding that sponsors should consider making their support conditional on such reform.

English Football Association chairman Greg Dyke sent out an even sharper message. “Sepp Blatter has to go,” Dyke is quoted by The Guardian as saying. “He either has to go through a resignation, or he has to be out-voted or we have to find a third way. I think the time has come where the damage this has done to FIFA is so great that it can’t be rebuilt while Blatter is there so UEFA [Union of European Football Associations] has got to try to force him out.”

On Wednesday, FBI Director James Comey hinted that the initial indictments could be followed with further arrests. “It is not over. The work will continue until all of the corruption is uncovered and a message is sent around the world,” he said.

Blatter appears to be implementing a “lie-low” approach. He ducked out of a scheduled appearance at a FIFA medical conference in Zurich Thursday morning, having already missed two scheduled appearances Wednesday, according to The Independent. The newspaper reported that Blatter’s disappearance in the face of scandal is uncharacteristic, a response that confirms this is the most serious controversy the organization has faced in its history.

But Blatter has earned his stripes as a remarkably resilient leader over the course of his 17 years as president. “He’s a survivor,” Roland Buechel, a U.K. parliamentarian once told the BBC. “Nothing ever sticks to him; there is always someone between him and the bribes.” Earlier in May, Blatter insisted that the FBI probe had nothing on him. And in his bid for re-election as president, he enjoys strong support from Asia and Africa, The Washington Post reported. If the vote does indeed go ahead, FIFA’s 209 member nations will select between Blatter and Prince Ali bin al-Hussein of Jordan (who has already leapt on the scandal as campaign fodder). Blatter is expected to win.

Swiss-born Blatter originally studied economics at the University of Lausanne — perhaps appropriately, for a man who has been accused of running FIFA “like a Swiss bank,” according to the Times — before a stint in the military, then in jobs at Swiss Ice Hockey Federation and for luxury watch manufacturer Longines. He has been accused of corruption several times throughout his presidency (coming under particular scrutiny after FIFA’s unpopular decision to award the world cup to Russia and Qatar), and has previously evinced a facetiously sexist attitude. Yet Blatter endured.

Imogen Foulkes of BBC News pondered the president’s longevity at the top. “Some old friends describe Mr Blatter as down-to-earth and open,” she writes.

Others who have worked with him say he is a man who resents opposition, pointing to the swift departure of FIFA colleagues who dared to question him. What emerges, finally, is a man who both critics and supporters say cannot imagine his life without FIFA, a man whose tenure as president has outlasted three marriages.

But as scandal follows scandal, Mr. Blatter's determination not to leave his post willingly could see him bundled unceremoniously out of the back door.

Stepping down seems, from Blatter’s character and professional history, out of the question. “From a reputational standpoint, I don’t think it could get any worse for him,” Alexi Lalas told the Times, “nor do I think that he would care if it did.”

The Guardian reported that Blatter was cloistered in an emergency conference with representatives from football’s six confederations Thursday morning. Whether the pep talk can inspire a workable game plan remains to be seen — and how Blatter will play this one should make for interesting viewing.