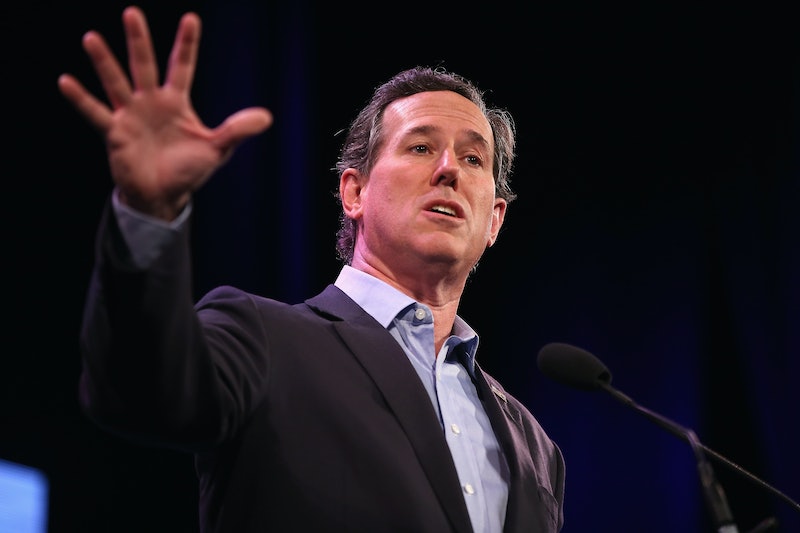 The man who finished second to Mitt Romney in the 2012 GOP primaries is having a go at it once more. Rick Santorum officially announced his candidacy for the 2016 elections on Wednesday, entering an increasing crowded and arguably shambolic Republican field. Santorum, 57, the stridently conservative former senator for Pennsylvania, won nearly a dozen skirmishes before conceding to Romney in his last primary war. In his announcement speech in Butler County, he emphasized his commitment to America's working families (a far cry from the socially conservative policies he has espoused throughout his career). But Santorum faces several hurdles in his bid for president. One of them, which emerged years prior to his last race, has become known as Rick Santorum's Google Problem.

After that, SpreadingSantorum.com was usually one of the three top results of a Google search on Santorum. Something of a sticky issue for a man looking for name recognition, and hoping for votes from a super-conservative base. Mother Jones reported that the joke site even eclipsed Santorum's own official campaign page, at one point. In 2011, desperate to make Savage's site go away, Santorum complained to Google. In February 2012, The New York Times reported that the company had responded — by introducing 40 alterations to Google's search algorithm, which pushed the offensive site down in the results.

But, as the Times pointed out, the scatological fake definition lingered. The new top Google result, after the change, was an Urban Dictionary page, listing Santorum’s awkward new meaning. And the vicious (but not necessarily undeserved) joke has arguably had a real effect on Santorum’s chances previously — with suggestions that the page might have helped along Santorum’s stunning defeat by Bob Casey in 2006, according to Mother Jones.

Now, Savage suggests to the investigative magazine that Santorum might be in for further humiliation. "Maybe we'll crank up the Wurlitzer one more time," he said, in the light of Santorum's announcement. "But maybe not. The rest of the Republican Party and the rest of the world has moved on." But regardless of whether or not he updates the site, hits will keep coming regardless, and Savage is sure the presidential bid will increase the site’s traffic. But Savage triumphantly pointed out that the policy point for which Savage nailed Santorum may shortly becoming a non-issue. "We win. We got marriage, and [Santorum] is a joke," he told Mother Jones.

But Santorum isn’t short on hyper-conservative ideas, frequently offensive in both their content and their blunt delivery. His record on such varied topics as abortion, climate change and the Iraq war have all ensured a hefty portion of haters. "Ultimately, the main factor holding back Rick Santorum is the fact that he’s Rick Santorum," Simon Maloy wrote in Salon. And even if he can attempt a makeover of his personality in the real world (with his new "champion of the working class" schtick prominent in Wednesday’s announcement), Santorum’s online presence is out of his hands. That icky "Google problem" might just stick around.