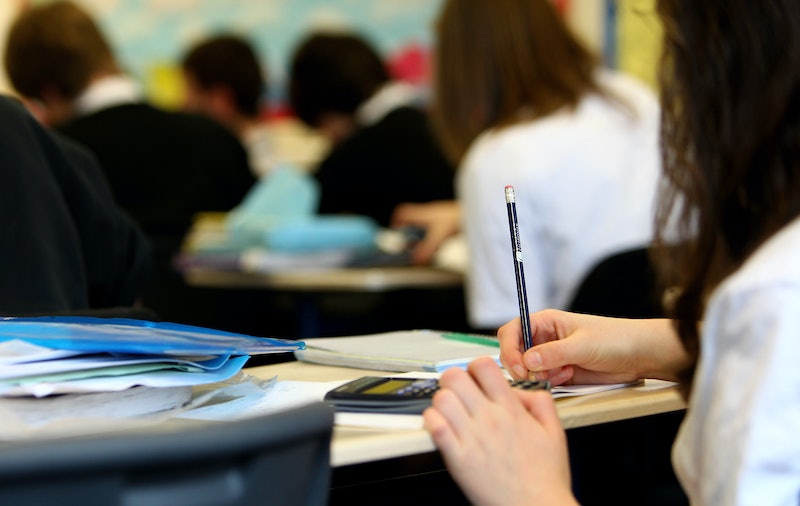 Remember how confident and self-possessed you were in high school? Are you laughing so hard right now, because, like me, you were the worst back then? You're about to realize how silly you actually were as a 16-year-old when you see this girl's feminist yearbook quote, which officially puts her in the ranks of the few teens who actually have some sort of sense of self and social conscience while they're still in school. The teenager, Caitlyn Cannon, used her high school year book to make a pertinent point about women's rights, leaving her legacy with the quote, "I need feminism because I intend on marrying rich and I can't do that if my wife and I are making .75 cent for every dollar a man makes."

Cannon graduated from Oak Hills High School in Oak Hills, California, and told Cosmopolitan that she's, "a feminist who is 'really gay'." She also said,

"I had no idea it would even be seen anywhere other than the yearbook, much less by thousands of people on Twitter!… While it would have been fun to submit something funny or silly, I think it was even more rewarding to submit the truth, and call some attention to it… Scrolling through the replies, I've seen a mixture of agreements and disagreements, although for the most part it was people saying 'Yes!' and getting excited about it, which was rad."

Here's the quote that accompanied her picture in the year book:

And here are some more incredible yearbook quotes that make you gag over cliches like "Dance like there's nobody watching":

1. This girl's incredible treatise against pineapple on pizza

2. This amazing badass whom I want to BFF immediately, even though she's probably more than a decade younger than I am

3. This hilarious dude who has life figured out:

Teens: Not so bad after all, guys.

More like this
At 14, Tatiana Maslany Was Obsessing Over Tamagotchis & The Spice Girls
By Gabrielle Bondi
Beyoncé & Madonna’s “Break My Soul” Remix Honors A Group Of Black Icons
By Stephanie Topacio Long
Scotland's First Period Dignity Officer Has Sparked Backlash
By Darshita Goyal
On TikTok, #SeñoraEra Shows Latinx Users Becoming Their Mothers
By Natalia Perez-Gonzalez
Get Even More From Bustle — Sign Up For The Newsletter