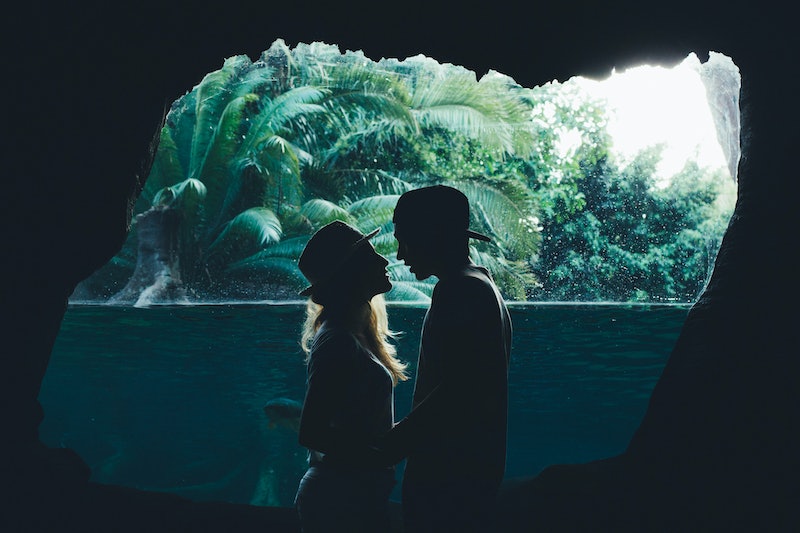 Dating is complicated and horribly confusing. There are a lot of different levels and rites of passage as you morph and grow together (or away from each other, sadly). To call romantic relationships tricky is one of the largest understatements I can summon to mind. As we know, communication is 100 percent crucial if you want even the whisper of hope of making a relationship stick. But how do you know you're in a relationship relationship, and not a just dating relationship? If those sound like the same thing to you, I'm officially jealous of your brain. There are major differences between the two states of romantic bonding, marked by associated, different signs.

So we're on the same page, let's all assume the definition of "just dating" means a far more casual, preliminary stage that precedes a "for real" relationship. "Just dating" isn't necessarily an exclusive arrangement, and includes far fewer expectations yet heaps more coolness. Remember, the key to hooking attraction while dating is to act as aloof as possible. I'm being serious. But how much time and what kind of life developments or routines signify growth? What means you graduated from just dating to a "for real" relationship? It's complicated, sure, but let's try:

They lose the code name

When you're just dating, a menagerie of identifying nicknames is totally valid so you can keep Hot Dad straight from Wine Guy, who is very different from Neighbor Dude and Princess Di. But when things build up to a for real relationship, you might even tell them their original code name, and you two will laugh it off. Since it's no longer relevant.

Your friends and family know their real name

As the code name dies out, you start referring to this person by their real name when with friends and family. They know the drill so well that they're not even all, "What's Hot Dad's real name again? Mike?" Because they know it's actually [redacted].

They're connected with your friends on social media ...

You know, I don't just add every one of my friends' random hookups on Facebook. There's gotta be some obvious flow and structure for that to happen. And when it does, it could mean a more serious connection.

... and their interactions aren't just limited to posts involving you.

In the early days of friends following your SO on IG (aren't acronyms stupendous?), they might limit likes and comments to photos only involving your cat or your face. That's expected. But when friends start actually making an effort to form a separate bond with your SO (and your SO with them, and same for you and their friends), that's big and promising.

You spend the night together more often than not

In fact, you come to kinda expect it most nights. You might even each have a clear preference of bed sides.

You both have toothbrushes each other's places

If you're snuggling up at another house regularly, this is just common sense and baseline hygiene.

You feel comfortable with sex stuff

Not only is the sex hot AF, but you two are also really good at communicating what works, what doesn't, things you'd like to try, etc. You keep it varied and frequent, but you also keep a sense of humor. In "just dating" things, it's too scary to laugh off the fart sounds belly skin sometimes make while you're boning. But at this point, y'all are masters of chuckling it off, then getting back to business.

Friends have started inviting you places as a duo

Your names together have developed a natural flow that places one before the other often. Like, "Jonny and Ashley" sounds better than "Ashley and Jonny," and even people who don't know each other use the same ordering.

This sounds nauseating, but that doesn't make it less true. Or standard. Or a thing that happens without warning as you enter a for real relationship.

You immediately want to share good news with them

Should your boss give you positive feedback or you find a crumpled $20 in the Bed Bath & Beyond parking lot, without thinking, you're already drafting a text to them about it. This is a clear-cut sign you like to share wins with them. Bravo.

Conversely, you wanna share the bummer stuff, too. This is because you now see this person as a source of comfort and camaraderie. It's a partnership, which means they're helpful in celebrations as well as mourning.

You talk about the future

Without completely bugging, you two can calmly and rationally discuss things months in advance —regardless of whether or not those plans directly involve or affect them. If you were considering buying a house for a few years now, you could drive around 'hoods you like together while craning necks at "For Sale" signs. It doesn't mean they're necessarily moving in, but it could. Either way, neither of you find such conversations as threatening.

Although these probably don't involve huge plans like cohabitation or, like, signing on for a mortgage together, they're still meaningful. You might book an Airbnb for a weekend trip two months out. Or maybe y'all buy tickets for a concert that's months away. You're no longer on the week-by-week swings of unpredictability of "just dating."

You use pet names and code words only you two know

Not to be confused with code names or general terms of endearment. You have started to devise names and phrases unique in your duo. That's part of the whole secret language of relationships, and it's indicative of a comfortable, healthy, lasting bond.

You don't mind a little PDA

When things are in ambiguous Just Dating Land, everyone's mega-cautious of showing any sign of ownership while roaming public areas. Even holding hands can seem super aggressive if nothing has been explicitly spelling out that direction prior. However, if light PDA (please refrain from dry-humping anywhere but the privacy of your home or car or whatever, guys) feels natural and unforced, you might be in a real-deal relationship.

But you also don't totally need or expect it

Nothing spells out insecure more than getting super zealous with handsy practices. Getting all up on each other regardless of a captive audience can and does happen early on when dating exclusively, but the waning of this practice signifies a more firm relationship. Perhaps there's some hand-holding and the occasional peck, but you don't have to be touching to feel comfortable with this person while out. And vice versa.

You feel compelled to check in before planning too much

We don't mean you feel like you have to ask for permission for anything, because that is creepy and not OK. More like you ask because you can't help but keep them in mind when going about your day, and want to make sure they feel involved and comfortable. You want to include them when possible, but still maintain a healthy independence with separate friendships.

You halt communication with all toxic exes

Don't look at me like that. I understand and respect that exes can maintain totally healthy, friendship-only friendships. BUT. It would be straight-up lying to pretend that toxic exes and the bond we sometimes continue to facilitate with them do not exist. That one former flame you used to text when sad-tipsy hasn't received one message from you as of late. And you know what? The temptation isn't even there to respond when they reach out first. Out of respect for your boo, you cold turkey quit the vicious cycle.

You stop cyber-creeping on exes, too

Not even to "check in," or other surface-level vanilla motives. You quit that, too, because frankly, you don't care. You're too love-drunk and secure in your current setup, so you no longer experience impulses to tango with your past. The present is simply way better.

You don't give a damn about hot strangers

Sounds corny, but you're seriously blind to babes lurking the same happy hour. Or that one barista you used to flirt with hardcore? Like, who? It's easy to forget foxy acquaintances as territory yet untapped when you've got the best brew a-flowin' in your real-deal relationship.

You talk through issues

Just like the unhealthy ex compulsion, we often have these immature impulses to yank the plug any time friction surfaces. Instead of caving to the urge to ice this person out during the most minor of arguments, you instead take the time to talk it through. You're patient with each other because you want to figure out the core issue.

You have similar life goals

I'm talking both big and small. "Big" like feelings on parenthood, marriage, religion, living situations, etc."Small" like Saturday night habits, exercise practice, honing various skills, pet ownership. You're on the same page with a lot of stuff, so it's not so much a matter of convincing the other to your side, because they're already there. That kind of compatibility is non-negotiable in long-term relationships, and a glaring sign of already being part of a real-deal relationship.

You set new goals together

I used to make endless fun of couples who trained for and ran races together, but that's probably just because I hate running and perhaps I was jealous at the time. Joining a gym or cooking healthy meals or taking on a local hiking challenge as a team are all great signs that you're in a for real relationship — since for-real relationships are kinda supposed to last for a while, goals should be set and chased. So it's related that ...

You help each other grow in positive ways

Not only did you two create a Google Doc of Mediterranean recipes, but you've also each split off to do additional research or practice on the matter. Basically, this is not a "just dating" kind of thing, in which you both egg each other on to become bed-bound slug people who order Seamless twice a day (which hey, no judgment; we've all been there). This person has got you so stoked on life that you just wanna keep getting better for it and them and yourself. And this person is so stoked on you that they experience similar ambitions. Finding a human who inspires to reach higher — whether it's with something silly, like cooking, or something serious, like establishing healthy habits — is one of the greatest discoveries any of us can make.

More like this
25 Questions To Ask Your Friends When You're Bored
By Lexi Inks
15 Ways To Tell Someone Was Just Talking Behind Your Back
By Carolyn Steber
Are Gemini & Scorpio Compatible In A Relationship?
By Kristine Fellizar
The Most Compatible Life Path Numbers, According To Numerologists
By Kristine Fellizar
Get Even More From Bustle — Sign Up For The Newsletter