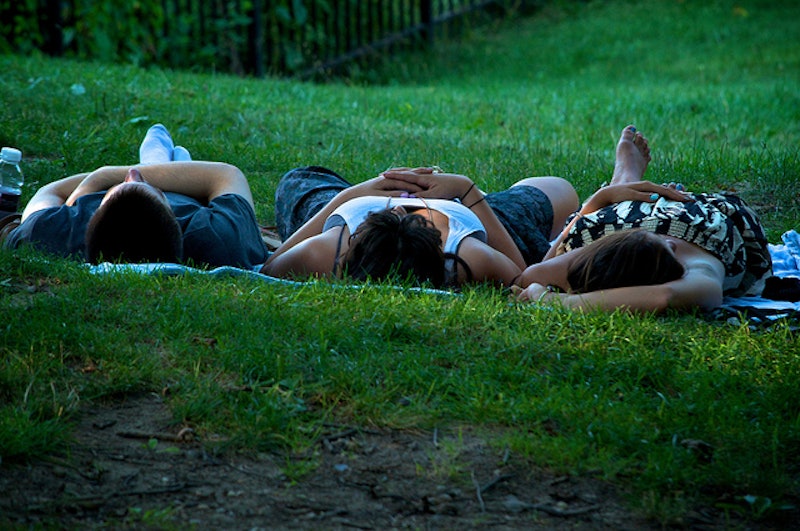 Ménage à trios anyone? Maybe it's my "try anything once" mentality, but if it's something you're comfortable with I'd totally recommend giving one a go. It's always fun to bring a fantasy to life and you may find it's your new favorite thing. But if you've never done it before, the idea can be a little overwhelming. A lot of guys I know have said that it sounds great but the reality is pretty intimidating. I get it— it's a lot, a lot of people, a lot of... limbs. The amount of limbs definitely takes some getting used to. So, what are the best threesome tips for beginners?

You may think of threesomes as a male fantasy, but we learned recently that women are way more likely to want threesomes and group sex in porn, so it looks like we're all a bit more into the idea than you might have thought. And it doesn't have to stay a fantasy — threesomes are great fun and have a whole world of possibilities. I've experimented with them and found on the whole they've been positive experiences. Obviously the most important thing is that it's something you're OK with, so I can only speak from personal experience. But here it is:

1. Before you get to the bedroom, make sure it's the right dynamic.

2. But most importantly is that it's people you feel comfortable with.

Maybe you like the idea of someone you're friends with, or have had sex with before, or that could stress you out and you'd rather it's people you'll never see again. Don't compromise on making sure it's with people and a dynamic you're going to be OK with.

Also, ideally the three people are all attracted to each other. Maybe this is just me, and maybe it's because I like having sex with boys and girls, but threesomes are better when everyone is attracted to everyone. My ideal is me with one (straight) guy and one (bi) girl. Or maybe two other girls, but I haven't tried that. Some people may not need that, like two straight guys with one girl, but I think it's too much pressure on one person. Also the focus can be off and it's easy for the whole thing to become imbalanced that way. Which brings me to...

It's a big leap of faith and maybe you thought you were going to be totally into it and all of sudden it's not for you. That's totally cool. Nobody wants you to be uncomfortable. Give it a go, start slowly, and remember at any time you can back out. You may feel like you're letting people down, but no one would want you to go through with it if you're not happy and enjoying yourself.

6. If you're nervous, set ground rules before hand.

I've always had sort of spur of the moment encounters, but if you're nervous and think it'll help soothe some anxiety then definitely map out some ground rules before you get into it. It'll probably be a kind of awkward chat but it's way better than being worried the whole time. Enjoy it!

More like this
The Best Positions For 6 Common Sexual Issues
By Lexi Inks
14 Underrated Date Ideas To Try With Your Partner
By Lexi Inks
Bumble's "Compliments" Feature Lets You Message Before You Match
By Lexi Inks
Are Capricorn & Aquarius Compatible In A Relationship? Astrologers Weigh In
By Kristine Fellizar
Get Even More From Bustle — Sign Up For The Newsletter