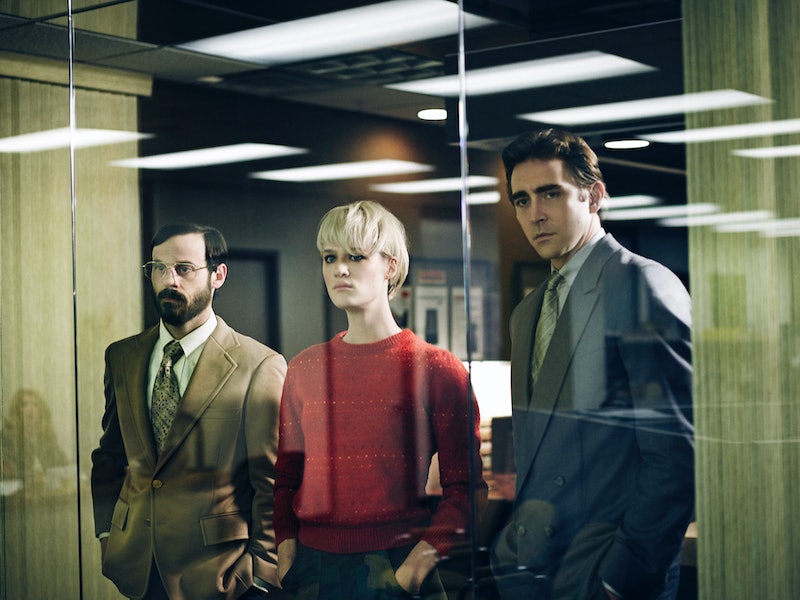 Mad Menmay be over, but AMC is still running strong with a new season of Halt and Catch Fire about to begin. Whether you're into 80s music, girls who code, or Lee Pace, this is definitely a show worth checking out. This may not be a life hack, but let me recap Season 1 of Halt and Catch Fire for you, so that you're caught up when the series returns.

The show focuses around a small tech company, called Cardiff Electric, fighting to design and put their personal computer, called the Giant, on shelves. The most depressing thing about Halt and Catch Fire? The desktop computer they built isn't nearly as intelligent or powerful as a cell phone today. Still, progress is progress. Halt and Catch Fire aims to make personal computing seem like the Wild West — which is probably why it's set in Silicon Prairie in Texas rather than Silicon Valley in California. At the very least, "Giant" is an homage to the 1956 film about Texas oil that starred James Dean.

The first season took place in Dallas in 1983. So in many ways, as a period piece it looks to me like what Mad Men looks like to my parents. However, while I may have grown up in an age of early personal computers, I don't know all that much about these machines that I rely on today for my livelihood and then some. I never jammed with the console cowboys in cyberspace. I don't watch this show for programming language or engineering, I watch it for the characters. Here's Season 1 of Halt and Catch Fire broken down by each of the major players and their journey.

Some people might say that Joe MacMillan is nothing but an 80s Don Draper or Walter White. Those people would be wrong. While he is a charming liar who excels in sales, Joe is not a technical visionary. He disappeared from IBM for a year, came to Cardiff and created a team to build a personal computer that would compete with, if not beat, his former employers. He's not afraid to con or hurt people to get ahead. He temporarily sabotaged his own operation on multiple occasions to garner publicity or steer the ship in the directed he wants. The whole PC project started at Cardiff because Joe engineered it so that they legally had no choice. He may not be good at computers, but he's good.

Joe's dark past is hinted at throughout the season. He is not on great terms with his father. His mother was a drug addict, whose carelessness ended in him falling off a roof while stargazing. He was severely injured and in the hospital for years. Joe MacMillan is also apparently bisexual, which is not common of leading men on cable or network television. He's in love with Cameron, the young girl he recruits to write code, but his last significant relationship was with a man named Simon.

At the end of the season, Joe torched the van with the first shipment of Giant computers. He really takes the title of the show literally. He then went hiking to visit an observatory and do some more stargazing.

Cameron is the coding prodigy of the group with a late punk sensibility. She dropped out of college to join Cardiff's team. She also appears to be homeless, as many misunderstood geniuses tend to be. Cameron is also the heart of the series, which isn't something you'd expect for someone who relates to the world in code. She develops an operating system for their PC that talks back to the user by name. It's a simple concept — nowhere near Siri or even the old Microsoft Word paperclip. However, it makes the PC special and appealing. When Gordon and Joe have to remove the OS to make the machine more affordable, a heartbroken Cameron bails.

Throughout the series, she had a bit of a "coming of age" while worked with other programmers, management, and creative restraints. At the end of the first season, she starts a new company called Mutiny with some of her "coding monkeys" and possibly Joe. Cliffhanger!

Gordon is an engineer who created a computing machine in the past with his wife called The Symphonic that caught Joe MacMillan's eye and caused him to seek them out in Texas. Ultimately, The Symphonic was a failure, and the Clark family has been drudging along ever since.

When Joe gets Gordon excited about building again, it brings out a spark of madness or mania. Most of his arc was built around the consequences that came from allying with someone as untrustworthy as Joe when he has two little daughters at home. However, he is able to rally the team and sell the PC under whatever means necessary — even though he loses some of its spark in the process. At the end of the series, Gordon is one of the only people still at Cardiff Electric. He was going to take down Joe and regain control of the company, but then Joe vanished.

Gordon's wife is also an engineer. At the start of the season, she worked at Texas Instruments. She also plays piano and has an amazing fashion sense indicative of a mature Molly Ringwald. Her relationship with Gordon can be frustrating at times, but also disgustingly romantic in the dorkiest of ways. She makes it very clear that she has sacrificed for her family and her husband, and fights for what is hers. At the end of the day, the two are intellectual equals and great partners. She saved the day by recovering lost data at Cardiff, and subsequently discovered that Joe purposefully trashed it in the first place. Cameron may be a genius, but Donna is the show's secret weapon.

While Gordon falls into work and becomes neglectful, Donna comes close to having an affair with her coworker and former High School classmate Hunt, played by Greek's Scott Michael Foster. That flirtation backfires when Hunt steals the plans for Cardiff's PC, Bring it On style, and presents it first at a conference. At the end of the season, Donna quits her job at TI. Gordon offered her a job as the Head Engineer at Cardiff Electric. However, she decided to join Cameron's hip, fledging company instead.

The man who hired Joe at Cardiff Electric, John Bosworth is the boss. He has a tumultuous relationship with Joe MacMillan, but grew fond of Cameron after a while. The two understand one another. He and Cameron embezzled money to fund the PC project, and then the old man took the fall in the criminal investigation of Cardiff Electric's finances.