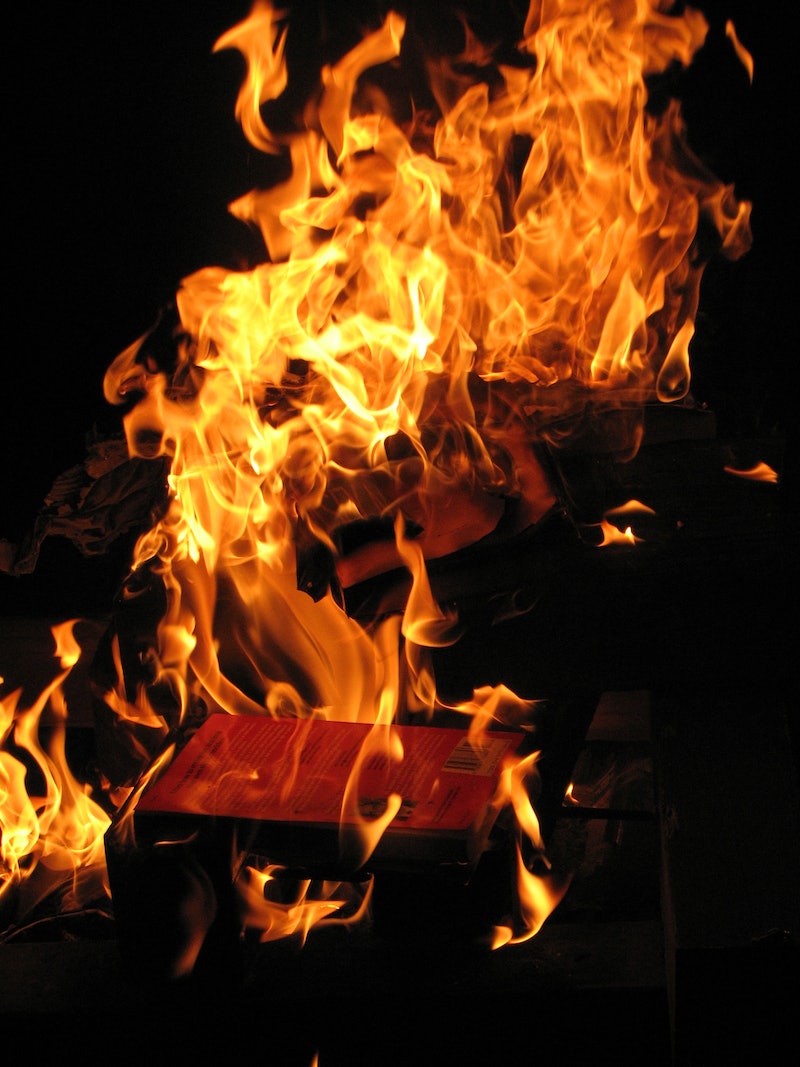 Veronica Roth was on top of the YA literary world. After its first two books, her Divergent series was critically acclaimed and accrued millions of fangirls and boys — not to mention the adults. Summit Entertainment snagged the movie rights to the first book, Divergent , which will be released in March 2014 starring breakout YA darling Shailene Woodley and Oscar-winner Kate Winslet. The final book in her trilogy was released at the end of October, shattering sales records set by Hunger Games finale Mockingjay by almost five to one. But then her fans read Allegiant, and the aftermath hasn't been pretty.

The rest of this post will contain spoilers, so if you haven't read Allegiant yet, beware.

Breaking from her style from Divergent and Insurgent, Roth cut up her finale novel into sections narrated by the protagonist Tris Prior and also her boyfriend and fellow former-Dauntless member Tobias, aka Four — which proved hard to digest for some readers, particularly those fond of her strong female character. But it was the ending that really got to the fanatical followers: Roth killed off her heroine.

And those tweets were the nice ones.

"I finished this last night and afterwards I felt just dead inside. I absolutely hate when a series ends leaving me feeling unsatisfied and even, in this case, angry. I feel kind of betrayed by the author," wrote a top 100 reviewer for Amazon.com.

"I have never been more disappointed in the last book of a series than I was reading this book. Normally I reread a series at least 3-4 times. Because of this book I will never read this series again, no matter how much I loved the first two books. They are ruined. Forever," wrote another.

Along with these comments, the ensuing days included death threats, 827 one-star reviews out of 2,452 total (to compare, it only had 647 five-star reviews) on Amazon.com, and a marketing counter-effort from Roth and her publicity team.

Roth spoke out on her personal webpage and to MTV.com about the overwhelmingly negative reaction to her third Divergent book — and it marked the first time Roth ever talked to the media about major plot points in any of her novels. When she was asked, "Why did she have to die?" Roth said to MTV:

It's actually been set up that way. At the end of the first book she almost experiences death … and she sort of plays around with the idea of self-sacrifice …. In the second book the same thing happens …. In the third book, she learns what it actually means to sacrifice yourself. It has to be necessary; it has to be out of love.

"And to me it was her finally understanding what her parents were trying to teach her in Abnegation," she added.

Roth followed up with the interview on her blog.

"I’ve said before that this ending was always a part of the plan, but one thing I want to make clear is that I didn’t choose it to shock anyone, or to upset anyone, or because I’m ruthless with my characters — no, no, no," she wrote.

Woodley, who will play Tris in the forthcoming Divergent movies, also came out of the spin machine to make a comment on her thoughts about her character's death.

"I think it’s awesome, and the coolest decision that’s ever happened in the young adult novel world. I’m such a fan!" Woodley said.

But — death threats aside — do Roth's diehard fans have a point?

"Ms. Roth had a lot of opportunity with this book. But because of her huge readership, she had a lot of power and responsibility too. She needed to write a good story," wrote one Amazon.com reviewer, who gave Allegiant a one-star review.

What allegiance, if you will, do YA novelists, particularly those in the throes of a bestselling series, have to their readers?

In her blog, Roth said, "I wasn’t thinking about any readers when I wrote this book; I was thinking about the story." But was that her mistake? Should she have been looking to her fans and how she could meet their hopes for the novel's ending? Whether you disagree with Roth's ending or not — and you have to admit she at least makes a compelling argument for sacrificing Tris to the story — her comment about not thinking about her readers is troublesome.

Readers, particularly in the YA genre, who have proven to show up in droves to buy their favorite author's novels — not to mention see the movies and buy the merchandise — should be on the minds of authors writing a series. Fans of Roth's Divergent series, again those making death threats aside, have proven to be some of the most engaged fans in book series' history. As an earlier Amazon.com reviewer mentioned, they not only read the books, they emotionally devour them, often multiple times. So, if a majority of readers have a gripe about a character's motivations seeming unrealistic to the story, they most likely have a point. And whether they intend to or not, they help Roth market her series across Twitter, Facebook, Tumblr, and other various social media streams. There's something special about YA readers. We are not a quiet bunch that takes reading as a personal endeavor; our engagement and emotional attachment is unparalleled in other reader groups, and to disregard that is Roth's mistake.

It's unlikely that this backlash will affect ticket sales for the movie version of Divergent — it may even give the movie more attention — but it will be interesting to see how other YA writers in the midst of a series take Roth's experience. Will it be a cautionary tale? Or will writers now have the gates open to say to their fans, you can't trust us with your beloved characters?