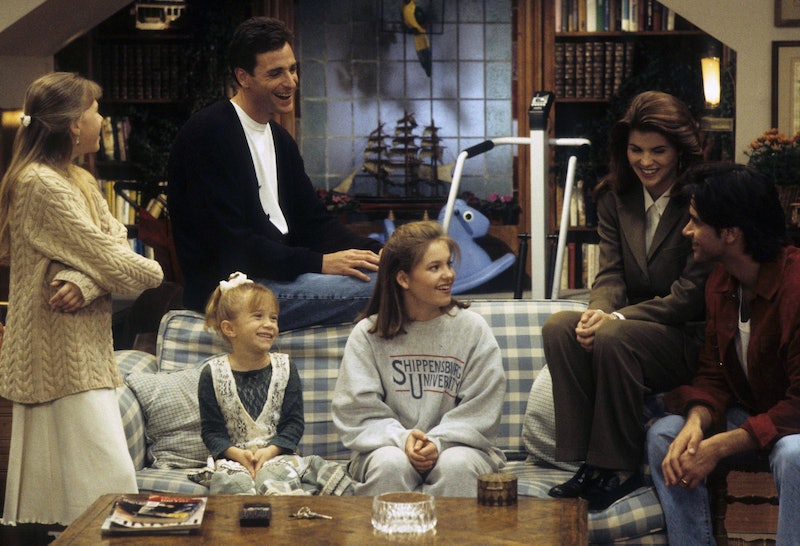 Every time a show from our childhood makes a comeback, most of us get giddy from nostalgia, chirping happily that "The '90s are back!" Except, it takes a close rewatch to realize that many things from our childhood are pretty much only products of their time and wouldn't at all fit in present-day... especially the clothing. Take the quintessential '90s sitcom, for instance: The outfits on Full House are so outdated now (the ones that the ladies of the show donned in particular), primarily because most featured scrunchies, overly crimped hair, and ridiculous sweetheart necklines. Still in denial? Don't worry — I have the pictures to prove it.

I painstakingly backtracked and collected some cringe-worthy '80s and '90s outfits from the Tanner sisters and their neighbor/honorary sister Kimmy. Trust me, I'd love to critique all the horrible Joey outfits and Uncle Jesse's mullet, but there's only so much time in the world and space on the Internet, so... you know. (Oh, and as for Aunt Becky? Though it's great that Lori Loughlin is returning to for Full House revival Fuller House, for the sake of this article — again, only so much space on the Internet — I will only focus on the Tanner sisters, biological and honorary. Teenagers make the weirdest clothing choices anyway.)

Ultimately, things evened out once Stephanie embraced the trials and tribulations of junior high, sartorial and otherwise. You know what I'm talking about: plaid-on-plaid, shorteralls, crop tops, high waisted jeans... honestly, like it or not, that badass rebel Gia's (who would probably be Tumblr-famous today) influence had a huge hand in turning Stephanie's style into something at least somewhat acceptable. However, the same couldn't always be said for her, or any of her sisters — and that's what I'm here to point out.

So, here it is: enjoy a smattering of some of the most outdated, antiquated outfits from the ladies of Full House.

1. When D.J. showed up to a middle school filled with Kelly Bundy lookalikes... in baggy neutrals.

When the teacher is wearing the same sad outfit as you, it's time to drop out.

2. Whenever scrunchies were involved — but especially when Stephanie attempted the look.

Come on, Stephanie, you have to balance out the volume of scrunchies with crunchy, thick hair! This just won't do.

3. When there aren't even words for whatever Kimmy's outfit is.

You pick a print and you stick with it. It's REALLY not complicated.

5. When Kimmy's outfit looked like something Katy Perry should have worn in her music video for "Firework."

6. When everything that's happening here is wrong.

Beginning with the fact that they're tap-dancing (does anyone remember being forced into tap lessons? Just me?) and ending with Kimmy's yellow two-piece.

7. Likewise, when this series of unfortunate events happened.

Guys, there IS a middle ground between yellow and the baggy neutrals. You DO know that, right?

8. When Michelle waltzes to the door in this lapis and turquoise button-up jumpsuit that even MC Hammer would probably deem, "a little much."

At least she's attempting to own it, I guess.

9. When everyone had tragic Aqua Net hair, and even more tragic tops.

Are people DANCING on that sweater?

10. When I THINK this is supposed to be sexy, but I also have no idea what it is?

Maybe another padded bolero... over a jump suit... and a gigantic belt... that holds up nothing? No?

It's depressing that DJ's forest green, velvet, off-the-shoulder dress is considered incredibly classy for its time. Kimmy's dress, however, is independently depressing. (And probably something Kim Kardashian wore in 2008.)