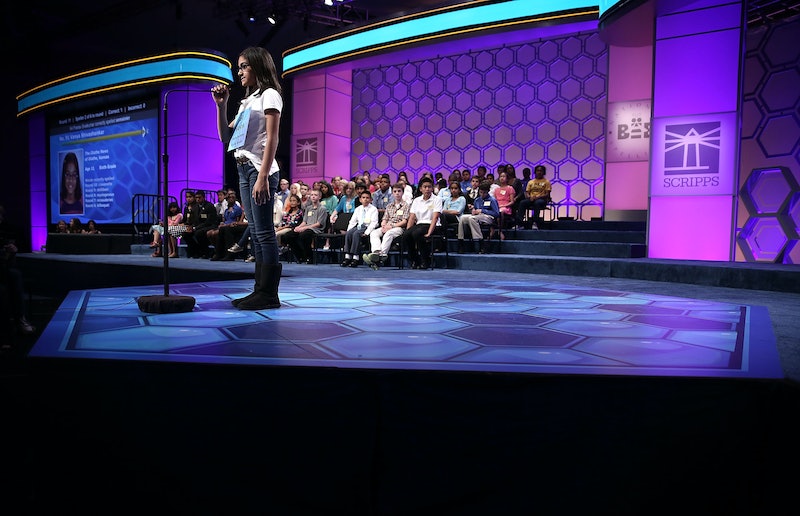 The 2006 movie Akeelah And The Bee proved spelling bees aren't just silly contests for kids. They're gripping and grueling competitions of some of the best young minds in the country, capable of bringing out every emotion possible — anxiety, ecstasy, disappointment — from the participants, their parents, and the judges. In a super impressive showing Thursday, Vanya Shivashankar and Gokul Venkatachalam tied to win one of the most vigorous competitions for expert wordsmiths, and the winning words of the Scripps National Spelling Bee are a good indicator of how intense the competition actually was.

It's actually the second year in a row the Scripps Spelling Bee, whose participants are in the eighth grade or below, ended in co-champions. In 2014, Sriram Hathwar and Ansun Sujoe both won the annual competition, which was the first time there were two winners in 52 years.

Shivashankar, 13, whose sister won the spelling bee in 2009, got a foreign word that was especially tricky — "scherenschnitte." The word is German for "scissor cuts" and means the art of paper cutting designs. Just check out a few of these intricate works. I wonder how many paper cuts must be endured before you can call yourself a master of scissor cuts.

Venkatachalam, 14, was told he'd be co-champion if he got the next word right. He got the word "nunatak" and reportedly didn't even bother asking its definition. In case you were wondering, a nunatak is a hill covered by snow and ice.

The co-win didn't come easy. For 10 rounds, Shivashankar and Venkatachalam went head-to-head, eventually using up all the 25 championship words. Other words during the intense face-off? Bouquetière, caudillismo, thamakau, scytale, Bruxellois, and pyrrhuloxia. Yeah, I'm Googling all of those right now.