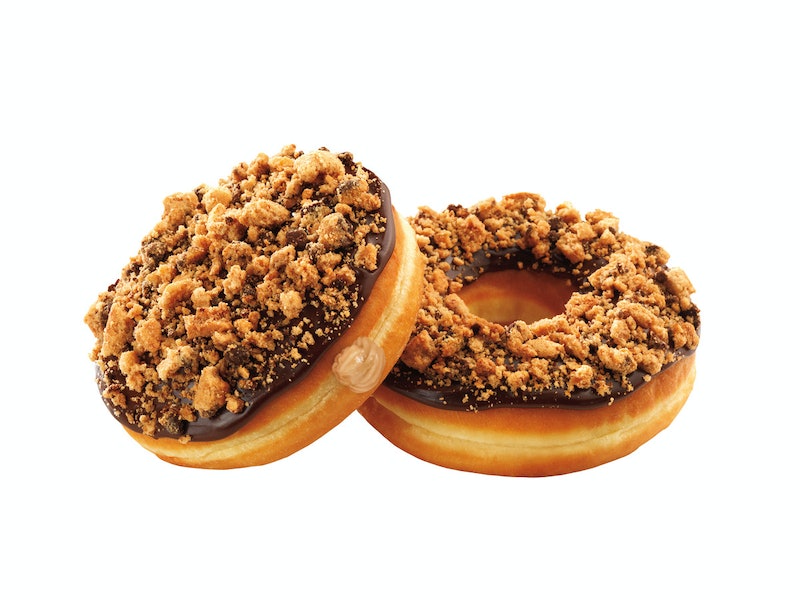 Do you have a sweet tooth? Like, a really, really big one? Good — you're going to want to pay attention to this one: Dunkin' Donuts Chips Ahoy donuts are a thing, and they're just as decadent as you think they are. I'm not kidding, you guys. Chips Ahoy…donuts. If a chocolate chip cookie and a breakfast pastry had a lovechild, this is exactly what it would look like.

According to Bloomberg, Dunkin' will begin selling the new pastries nationwide on June 1. You've got two options, depending on A) how sweet you like your donuts, and B) how dedicated you are to experiencing branding mashups to the fullest: The Chips Ahoy Crunch is simply a regular donut topped with chocolate icing and sprinkled with chocolate chip cookie crumbs, while the Chips Ahoy Creme comes stuffed with cookie dough–flavored buttercream in addition to featuring the same toppings as the non-filled version. For the curious, there's also a Chips Ahoy Coolatta on the menu now, allowing you to reach maximum Chips Ahoy-ness. Or…something.

Comparatively speaking, a cookie dough–flavored donut is pretty tame. First off, this isn't the first time we've seen something similar at Dunkin'; the previous two years' Baskin Robbins–themed offerings have included Cookie Dough donuts, and to be honest, I'm not totally sure what separates the Chips Ahoy ones from them other than the branding. And second off…well, I'll just point you in the direction of cheeseburger-stuffed donuts and taco donuts to make my point. I would argue that savory donuts are always infinitely weirder than sweet ones, but Dunkin' doesn't really do savory. They tried a glazed donut breakfast sandwich once, but I don't think it went over too well.

What is sort of interesting about this particular offering is that Dunkin' isn't marketing it solely as a breakfast food — the idea is to make it an “anytime snack.” Said Dunkin' Donuts Vice President of Marketing Chris Fuquato Bloomberg, “As donuts become more of a culinary treat across the industry, I think we see an opportunity to expand our donuts in the afternoon. People are trying different things at different times of the day.” I kind of think we'd be better off thinking of it (and most donuts, for that matter) as a dessert, though; donuts are many things, but a healthy snack is not one of them. Cookies aren't really a snack either, for that matter — if you're feeling peckish between meals, you're better off going for a handful of nuts or some veggies and hummus. That way, you'll avoid crashing from a sugar high later on.

But sometimes, you just need a little sweetness in your life, so these suckers should fit the bill nicely. I would recommend consuming them with a cup of black coffee; you'll need something a little bitter to cut through all that sugar. Besides, nothing beats a good old-fashioned donut-and-coffee combination, right?