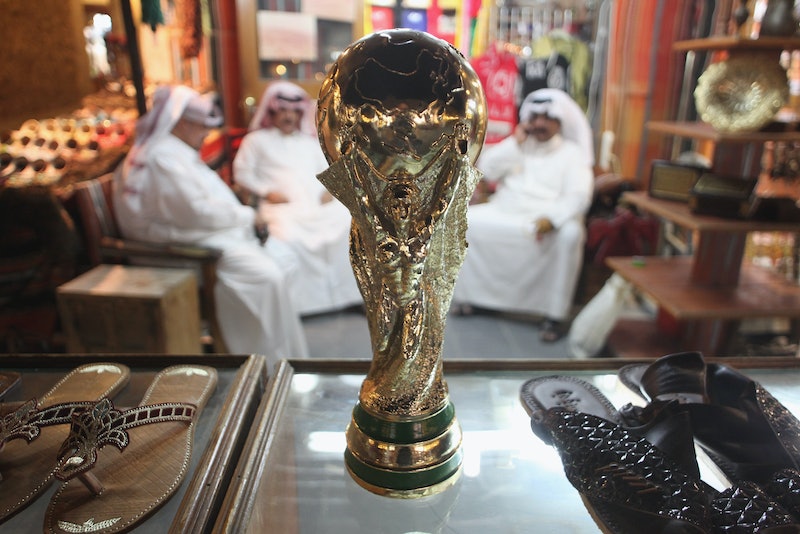 Football’s global governing body has been reeling from a far-reaching corruption probe launched in earnest earlier this week. On Wednesday, nine top FIFA officials were arrested on charges of racketeering, wire fraud, and money-laundering conspiracies. The executives were implicated in what has been termed a “World Cup of fraud,” by Richard Weber, chief of the IRS­ criminal investigation. But the 47-count indictment isn’t the only cause for concern. At the same time as the arrests were announced, Swiss officials launched an investigation into the awarding of the 2018 and 2022 football World Cups, to Russia and Qatar, respectively. With doubts cast over the legitimacy of the bidding process, how have Russia and Qatar responded to FIFA’s corruption woes?

The two winning bids were announced on the same day in 2010, and since then the decision to send the World Cup to first Russia then Qatar has been mired in scandal. As The Atlantic reports, accusations of bribery, general wrongdoing, and dodgy doings have trailed in the wake of the decisions. Qatar’s hosting role has proved particularly controversial, with the country’s weather and human rights record both cited as reason for concern. The groundbreaking decision to shift the 2022 tournament to winter was announced in March — sort of, maybe, alleviating the weather issue. But the fact remains that since 2010, more than 1,200 South Asian migrant workers have died while working in hazardous conditions to erect Qatar’s stadium infrastructure.

And now, as if Qatar and Russia as hosts weren’t controversial enough, comes an investigation into whether they won the bidding through bribery. In response to the arrests and the Swiss probe announcement, FIFA rapidly stated that the World Cup bidding process would not be reopened. The reaction from the implicated countries has shied away from directly dealing with their own conduct.

On Friday, Qatar belatedly issued its first statement since the criminal investigation was announced Wednesday. The wording was vaguely defensive. “[O]ur aim through hosting the FIFA World Cup is to utilize the positive power of sport to unify people” and to demonstrate the region’s love for soccer, the statement from Qatar’s World Cup committee read, according to AP. Qatar has “fully complied with every investigation that has been initiated concerning the 2018/2022 bidding process and will continue to do so,” it continued, adding, “we conducted our bid with integrity.”

Russia, meanwhile, has been even less willing to comment on their involvement. President Vladimir Putin has gone so far as to accuse the United States of intervening in matters outside its jurisdiction by ordering the indictments. “This is yet another blatant attempt [by the US] to extend its jurisdiction to other states,” Putin said Thursday, speculating that the arrests were a calculated move to push long-standing FIFA president Sepp Blatter out of office. The New York Times reported that the rapid, vindictive, response might be due to Russia’s concerns that the corruption probe might cost them the World Cup.

A BBC compilation of football fans’ responses in both Russia and Qatar has revealed more mixed opinions from the country’s sport-viewing public. Elena Selezinka, from Moscow, writes, “Geez, what does the US have to do with football? They don’t even like it… I believe that both Russia and Qatar have every right to host the occasion. Why not?” Her compatriot, Alexander Volynsky, is not so sure. “Doubtless, considering new circumstances, decision about hosts of World Cups should be reviewed. Look how Russian bureaucrats started running about like mad, seems like they have reasons to worry,” he wrote.

From Qatar, @Tahini_alhajri tweeted, “I'm from Qatar, and Qatar deserves to host the World Cup. It has made a strong bid to host it, so it doesn't need to bribe anyone.” But @q6r tweeted to BBC Arabic his own concerns. “I'm from Qatar and at the start, I was unsure about Qatar hosting the World Cup due to the potential negative effect that hosting might have on my country,” he wrote. “[B]ut our government has proved that it can deal with any obstacle it faces.”

A glance at Transparency International’s Corruption Perceptions Index 2014 (which ranks countries based on how corrupt their public sector is perceived to be) indicates that neither Russia nor Qatar is a stranger to graft. Qatar only scored moderately poorly, coming in at 26th place, out of 175 territories. Russia, however, languished at 136th place (behind such luminaries as Iran and Nigeria). South Africa, too, did badly, and ranked 67 out of the bunch. Host of the 2010 World Cup (which FIFA president Sepp Blatter has termed a “huge financial success”), South Africa was also implicated in the corruption investigation.

As part of the probe, allegations emerged that South Africa’s bid (concluded over a decade ago) was entangled in bribes of over $10 million, made to secure FIFA votes. The charges have rocked a nation enduringly proud of its riotous World Cup effort, which seemingly united the country in a month-long celebration. South African Sports Minister Fikile Mbalula immediately denied the charges, and echoed Putin in his claim that the US was reaching “beyond its borders” with the indictments.