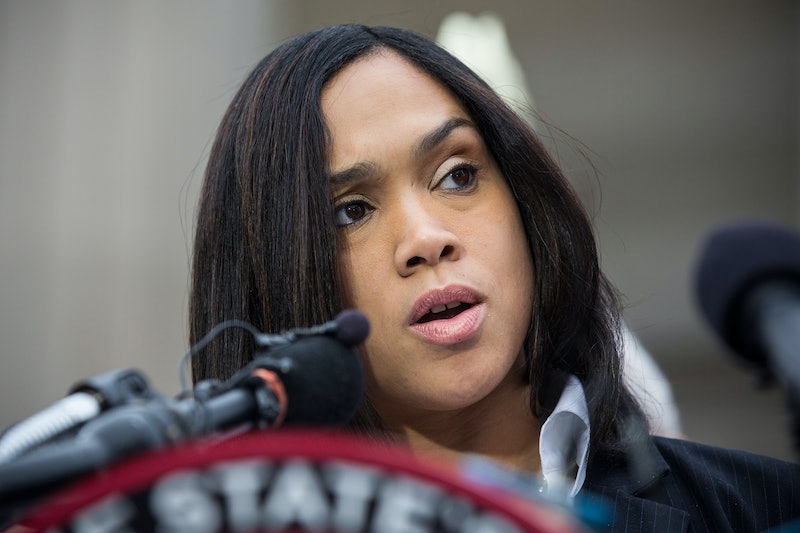 Marilyn Mosby, the Baltimore City State's Attorney, has been praised for her rapid and careful work indicting the six police officers involved in the arrest and subsequent death of Freddie Gray last week, but the prosecutor had her first 15 minutes of fame years ago. Mosby appeared on Judge Judy in 2000. The 20-year-old college student won her case, proving that she was always an incredible lawyer.

A spokeswoman from her office confirmed to The Baltimore Sun that the young woman was in fact Mosby. Known by her maiden name, Marilyn James, at the time, Mosby sought damages from her neighbor who she claimed trashed her apartment while she was gone for summer break and the hot-tempered TV judge sided with her.

Mosby, now 35, became the center of interest as the nation demanded justice for Gray, the young Baltimore man who died after suffering a spinal cord injury while in police custody. After a lack of punishment for those involved in the deaths of Trayvon Martin, Eric Garner, and other young black men killed recently, Mosby's decision to indict six officers for Gray's death was the first step toward justice for the Black Lives Matter movement and people of color wrongfully hurt or killed by law enforcement.

Mosby's case in the dramatic TV courtroom was personal — she wanted her neighbor to pay her back for destroying her apartment. At the time, she was a college student at Tuskegee University in Alabama, according to her LinkedIn profile. Judge Judy awarded Mosby $1,732 in damages after seeing photos of the damage and hearing Mosby's argument. She wasn't seeking punitive damages, but the judge said she would have awarded them to her as well. Judge Judy said to the defendant:

Listen, Mr. Johnson. What you did to this young lady was wrong. You figured she's a college student, she has no way of fighting back, she has nothing else to do.

After the verdict was delivered, Mosby said to the camera:

I feel like there's finally some justice served. I tried to speak to the DA. I spoke to police officers. Judge Judy... she finally gave me justice.

The decision to indict the Baltimore officers showed that Mosby is committed to fairness and holding everyone accountable for their actions, and, based on her appearance on Judge Judy, she always has been. She felt she was treated unjustly and didn't stop until the wrong was righted.