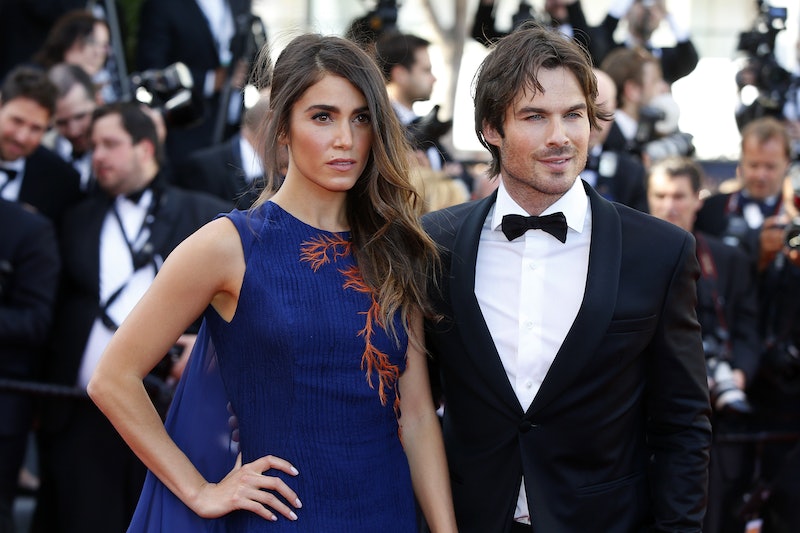 Sometimes the truth hurts. Especially when Ian Somerhalder is the one dropping truth bombs left and right, and the "truth" we speak of is the fact that his crazed fans won't leave him the hell alone. The Vampire Diaries star and his soul vamp, Twilight's Nikki Reed, were married last month in Santa Monica after just nine months of dating. Although his fans have always been a loyal bunch, the desire to know him inside and out seemed to increase tenfold after he tied the knot. When the 36-year-old actor finally broke down and nicely told fans in Paris he wanted privacy, one fan collapsed in tears, as People reports, and a video clip of the incident briefly appeared on Twitter until it was either deleted or pulled down.

Somerhalder and Reed, 27, were exiting a hotel in the romantic city when a group of fans stopped them and asked if they could take a few photos. The star didn't exactly pull a Russell Crowe, the way some are making it seem. According to Hollywood Life, he politely asserted himself by saying,

There's really no sweeter way to be told to buzz off.

A girl standing in the crowd continued to beg him for "just one" photo (which, come on, take a hint) and Somerhalder honestly replied, "It's not just one." And he's right. Had he and Reed agreed to pose for one photo, a million people would have come out of the woodwork asking for more, more, more. The poor guy and his new bride were probably looking forward to grabbing a delish quiche and almond macarons and instead had to confront upset fans — they don't seem like the type of couple who dig the attention or have any desire to piss people off.

Unfortunately, it didn't end there. Reportedly, the girl began weeping and Somerhalder tried his best to comfort her by touching her shoulder and saying, "I'm right here." Now, if I were this fan, I'd live the rest of my days happy to know my body had been touched by my idol. I'd give up asking for photos and float all the way home. But apparently, this mega-fan continued to ask the actor for one more photo, at which point he probably realized there was no exit from this nightmare and that the only thing he and Reed could do was make a break for it.

And so they did. They deserved a whole plate of macarons after that.

The couple has been silent on social media about the incident and I don't expect that they will divulge details or share their side of the story anytime soon. The last we heard from Reed, she was posting cute photos of Parisian dogs and buildings and sharing an intimate video from her wedding:

And anyway, they have nothing to be ashamed of — all newlyweds deserve a chance to get to know one another better and vacation in peace and these two beauties are no exception.