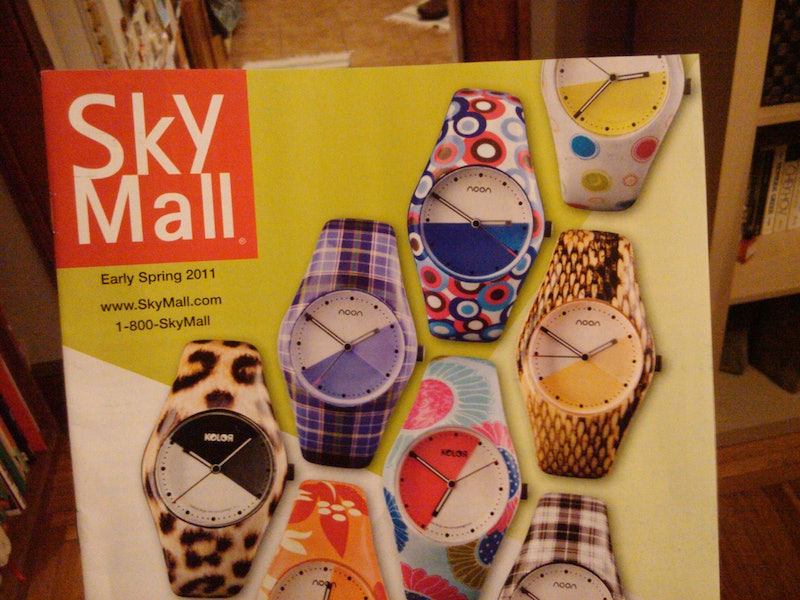 If you've missed being entertained by reading SkyMall during your longest, most mind-numbingly boring flights, there's good news: Skymall is back! The company went belly-up last January as they filed for bankruptcy, which put the fate of SkyMall in uncertain hands. Their sales had been declining, which was thought to be due to the increase of electronic devices by passengers during flights; as you can imagine, if you're reading a book on your Kindle, you'll probably be less inclined to look for reading material inside your seat pocket. In fact, Scott Wiley, CEO of SkyMall's former parent company, Xhibit Corp, even blamed the bankruptcy on the rise of electronics, but was hopeful another company would purchase SkyMall and relaunch it.

SkyMall was acquired by Xhibit Corp in 2013; unfortunately, though, they filed for bankruptcy in January of 2015, which brought SkyMall down as well. Last month, C&A Marketing bought SkyMall for just under $2 million — and with it comes a whole new lease on life. The New Jersey-based company, which also owns Ritz Camera and Polaroid, is optimistic about the relaunch of SkyMall, taking to Twitter as a marketing technique to build hype.

If you're wondering when you can expect to see the beloved catalogue back on airplanes, Executive Vice President of C&A Marketing Chaim Pikarski told the Huffington Post that the SkyMall magazine will return later this year. "We are looking to add more of the innovative, fun cool products that people are looking for, but that are still in keeping with the DNA of SkyMall," he said.

Obviously SkyMall is going to need to make some changes if they want to stay afloat; it's a new world out there and all. So, since Millennials and younger generations approach shopping and flying a little differently than previous generations, here are four ways SkyMall could revamp itself for a new audience.

As SkyMall's former CEO said, electronic devices are causing people who are flying to ignore their seat pockets and instead have their attention on their iPads, laptops, and Kindles. As such, SkyMall should adapt to the changing market and make digital versions of the magazine available for download on mobile devices. Imagine how much more business they would get if they responded to this change in retail — although how to make those digital versions available once a plane has taken off is another question. No Wi-Fi (or at least, no free Wi-Fi) means no downloads, unfortunately.

C&A Marketing seems to have the right idea with their SkyMall Twitter activity and should keep it up! Social media is how Millennials connect to brands, so if they want to ensure SkyMall reaches younger audiences, their online presence is going to be crucial to their success.

SkyMall is known for selling out-there products that most people would never use, but if they want to stay afloat this time around, I think they need to sell some practical products as well. What about instead of this crazy looking pillow, they sell a pillow that can fold up and be taken anywhere instead, for instance? Or insulated gloves instead of this beer mitt?

Many successful brands have launched themselves through celebrity endorsement deals and SkyMall should consider doing the same. I can see someone like Gary Busey, Lena Dunham, or Bob Saget being a good fit for branding, with their quirky but likable personalities.

Images: the queen of subtle/Flickr; Giphy (4)