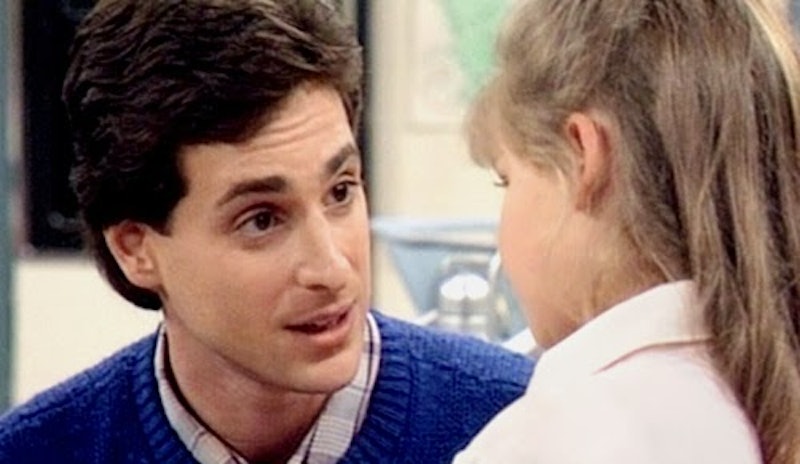 As if you weren't already giddy enough about the Full House sequel, we have an exciting update. Turns out Bob Saget will appear on Fuller House , reprising his role as lead patriarch slash anal-retentive dad Danny Tanner. Which is great, because it's been too long since we've gone without one of those silly Danny Tanner inspirational speeches. You know the ones I'm talking about. Stephanie is anxious about her first day of school, D.J. wants her own room, and, all of a sudden that gentle piano music starts playing. Danny cuddles up next to them and explains that we need to keep on living, even if we feel afraid of change, or something like that.

It's not that Danny was the only one who gave these speeches... Joey would console Jesse, Michelle would console Comet, and that light piano would play as they hug. But Danny Tanner speeches were particular parody-worthy. I mean, by Season 5, even the characters were aware of Danny's tendency toward inspirational speeches, with DJ quipping, "Why don't you say we just skip the speech, go straight to the hugs, and we'll all start packing."

So, in honor of Saget's return, I combed through eight seasons of Full House transcripts and collected a few of those Danny Tanner lines that become downright baffling without the context to clear them up. Be creative, Full House fans.

"Girls. Girls, I know you feel bad. But that's because you love your Uncle Jesse and you feel like you let him down. I know that losing Bubba was an accident. You've got to understand we're right behind you no matter what you do."

To recap, Jesse brought home a pet turtle (which is wildly irresponsible in several ways), the girls lost it, and Danny is showing his support.

"Well, moms and dads talk about all kinds of things. And one night, we had a lot talk about what we would do if something ever happened to one of us. We talked about making sure you were all taken care of and we agreed that if either one of us became single again, we should try to meet someone else to share our life with."

This the speech that Danny gave in order to stop the Tanner girls from interfering in his love life. Out of context, it just sounds like a bizarre thing to say to a child.

"I'll tell you what happened. Steve's grown up a lot in the past 2 years. He's becoming a young man. DJ, I know you're having a hard time with this, but that's no reason to clean his clock."

Not referring to boyfriend Steve, but rando cousin Steve, who DJ seems to harbor weird feels for. Also, "clean his clock?"

"Can you honestly tell me that you can just forget about the past seven months? Just walk out of this house and go back to visits on birthdays and Christmas?"

Jesse's about my age at the start of the show (24 or 25, give or take), and Danny's asking if he can honestly just walk out of the house of screaming tiny females.

"You are. But you still have to learn to balance your priorities. I mean, Jess, it's great that you want to bake cookies for Stephanie, but not if it means it's going to cost you your job."

"Honey, people come in all different shapes and sizes. Everybody wishes they could change something about themselves. Back when I was a kid, I wished I could be more like that guy on the Incredible Hulk."

Not The Hulk, but Bruce Banner — which I'm not sure is better or worse. This is the encouraging speech from D.J.'s anorexia special episode, by the way.

What. This one didn't even make sense in context.

"Honey, let's talk about Glen for a second. You know it's fun to have a Glen, or a pretend duck named Norton, or my best friend when I was a kid, Terry the talking washcloth... "

"The truth is, Steve's a pretty good kid. He's polite, he's a good eater, he's got a darn good headlock."

This time referring to boyfriend Steve, not her rando cousin Steve. I don't even want to know...