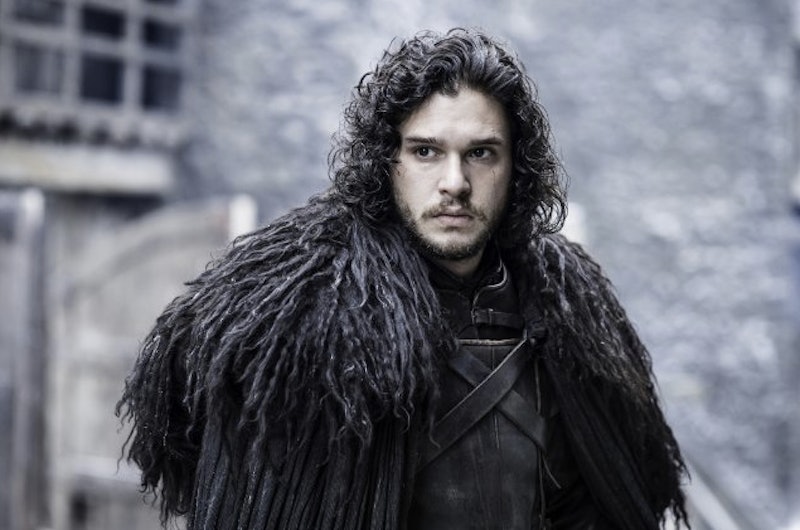 Game of Thrones fans, I have some bad news for you — the show's fifth season finale is not looking good for your boy Jon Snow. But, before you panic, I don't have any secret blogger intel on this; I didn't receive a screener or anything, so I'm not about to lay out a bunch of spoilers. That part will come later. Nope, this all comes from the synopsis for the Game of Thrones Season 5 finale, which includes the line "Jon Snow is challenged." Now, that might not sound like a big deal to you, but, if you've read the books and have a vague idea of where we are in Snow's story arc, you should be shaking in your boots right now.

Of course, the explanation does also involve those spoilers I was talking about earlier, so, if you haven't read the books and/or don't want the finale (potentially) spoiled for you, then I recommend you stop reading and click away. Did you do it yet? You should do it, spoiler-phobes.

OK, so, if you're still here, I'm assuming it's because you're comfortable with my speculating about how the book and show will converge in the finale — especially in regards to Jon Snow. So here comes my theory: Jon Snow dies. Or, at least, gets stabbed a bunch of times. We'll have to end the season not knowing whether he's alive or dead, which is exactly where we are in the books right now, and have been since 2011, when the fifth book in the series, A Dance With Dragons, was released. So we've just been on the edge of our seat for a four full years now, NBD. (I am shaking my fist at the sky, and in the general direction of George R.R. Martin right now.)

In the book, the men of the Night's Watch (or at least those of them remaining at Castle Black) turn on Snow, stabbing him and leaving him for dead. Since we know that the show will be passing the books in Season 6, it only makes sense that we'd take Jon right up to the end of his prewritten story line in Season 5.

Or... they could go an entirely different direction, but, at the rate that both the series and the books are knocking down Starks, I'd be shocked if "Jon Snow is challenged" means anything good for the dude. I guess what I'm saying is that we only have three more episodes left until the end, so I'd recommend you do your best to soak up as much Jon Snow as you can in the interim. It may be your last chance before the finale on Jun. 12.