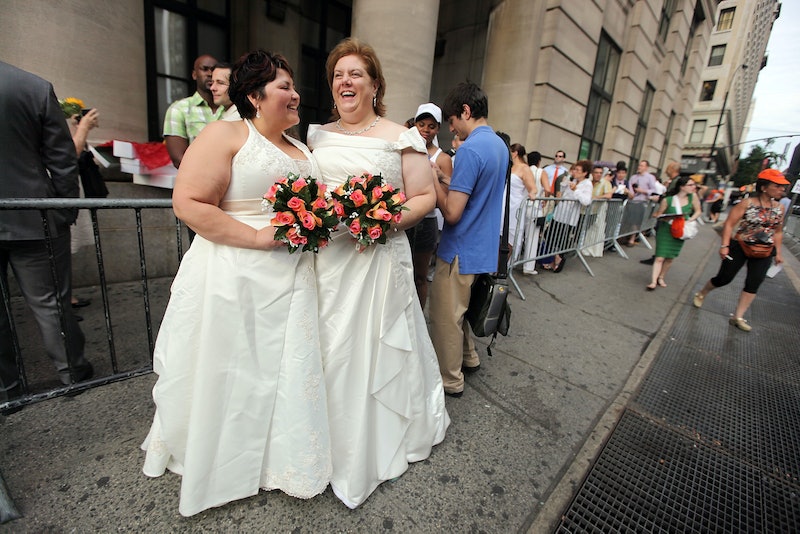 With the start of Pride Month just days away, the U.S. Supreme Court scheduled to decide on gay marriage before the end of June, and Ireland becoming the first country to make same-sex marriage legal, it’s a pretty exciting time. In the past few decades, the LGBT community and its supporters have made great strides in securing equality, but obviously we’re not totally where we should be just yet. If all goes well, we’ll get to celebrate here in the States by the end of June, the same way Ireland as been partying ever since they saw same-sex marriage become legalized just last week.

But, as Americans, we sometimes forget that marriage equality is a struggle all over the world. While Ireland made headlines with their legalizing of same-sex marriage, there are still other countries so far off the mark when it comes to anything even remotely close to equality, that in those place even being gay is punishable by death — a reality that is truly hard to believe in 2015.

So, because each country is very different in how they approach members of the LGBT community and same-sex marriage, BuzzFeed News/Ipsos polled 23 nations to see how their residents feel about these topics. Here are seven interesting facts they uncovered:

1. Spain Is The Most Supportive Country Of Same-Sex Marriage

In Spain, 77 percent of people believe that gays should be allowed to legally married. Not far behind, at 74 percent, is Sweden, followed by Belgium (69 percent), Germany (68 percent), and Great Britain (67 percent) rounding out the top five.

2. Italy Is The Only Western European Country With Zero Protection For Same-Sex Couples

Currently there are only two Western European countries without marriage equality: Germany and Italy. Although Germany recognizes civil unions, Italy has no protection or recognition of same-sex couples at all, despite the fact that 75 percent of Italians think that gay marriage should be allowed some level of legal recognition, and 48 percent believe gay marriage should be legalized.

3. Support For Gay Marriage Has Dropped In Canada And Australia

4. The United States Is Not As Open To Same-Sex Marriage As It Should Be

5. Argentina Is The Most Supportive Country In Latin American Of Gay Marriage

In 2010, Argentina became the first country to allow same-sex weddings, and since then they have had the largest increase in support of same-sex marriage, especially over the last two years.

Although it would seem that once a marriage equality law is passed, gay marriage would become more accepted, that’s not the case in France or Great Britain. France, most notably, has been very vocal in their opposition of it, and as President François Hollande was passing the law in 2013, demonstrations against it were happening all the time. Since then acceptance of gay marriage remains unchanged in its percentage, but France is also 64 percent Catholic, so that might have something to do with it.

7. People Under The Age Of 34 Remain The Biggest Champions Of Same-Sex Marriage

In Australia, Germany, Great Britain, Italy, Japan, and the U.S., people between 16 and 34 are the biggest supporters of gay marriage. In all these counties, except for Italy, those between 50 and 64 are least accepting. For some reason, in Italy more people support gay marriage in the 50 to 64 bracket than those in the 35 to 49 bracket, which is both surprising and awesome that the older generations are on the right side of history.