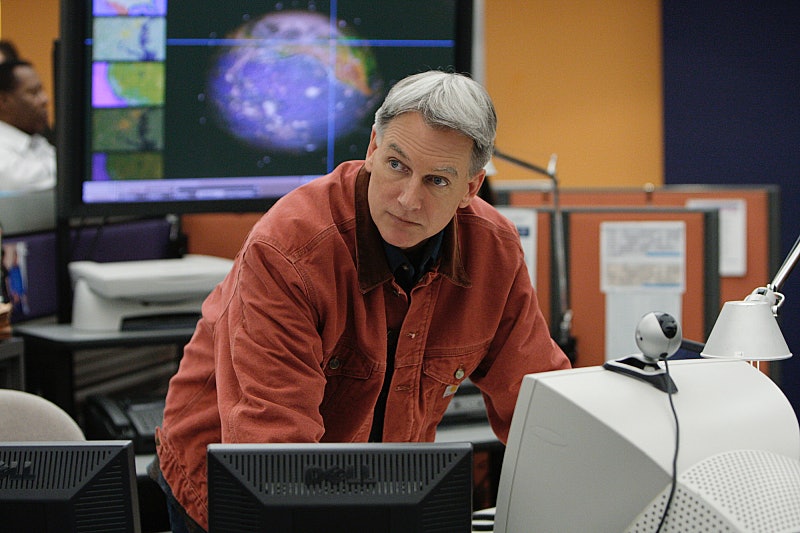 NCIS premiered in 2003. Let's go through what was happening in 2003. Camera phones were a new thing, Finding Nemo came out, "Ignition (Remix)" was dominating the boomboxes around the country, and I had just got braces. NCIS, camera phones, Finding Nemo, "Ignition (Remix)," my orthodontics, these are things that have all gotten better with time. Now that's not to say that NCIS wasn't good when it premiered in 2003, but boy, have things changed. I don't even know if I watched the NCIS pilot when it premiered — I was 11, that seems a little dark for an 11-year-old, right? — but upon re-watching the pilot of NCIS, a few things became clear to me. This show has really evolved. Also, I should try and find my retainer.

The episode revolves around a death on Air Force One. Don't worry, the George W. Bush look-a-like wasn't injured — I know, so 2003 — but a Navy Commander was. The mystery itself revolved around who killed the man, and if it could possibly be a threat to the President. There are a number of things that happened in the pilot that you don't remember.

Here's what you probably never noticed, but definitely would now notice, if you re-watch the NCIS pilot.

1. It All Starts With Kate

RIP Kate. Still heartbroken. Kate doesn't actually start out on the NCIS team, but on the Secret Service. She was on Air Force One when the Navy Commander went down. The NCIS team was called in from there.

DiNozzo's cockiness didn't just come out of nowhere, he was like that from the very beginning.

3. Fornell Is In The Pilot & Already Feuding With The NCIS Team

Definitely didn't remember that Fornell has been battling jurisdiction with NCIS since the very beginning.

McGee isn't in the pilot episode, in fact, McGee doesn't become a series regular until Season 2.

In a tit-for-tat with Gibbs, Kate tells Gibbs she "earned her jock strap," to which he responds, "Does it ever give you that empty feeling?" Not. Cool. Kate comes back with a "I grow what I need," punch, which later gets Gibbs to fess up to Ducky that Kate "has balls."

Kate quits Secret Service for breaking a fraternization rule, and she also asks Gibbs if he is going to lecture her on sleeping with people you work with. Gibbs' says he won't lecture her, but we do learn later in Season 1 that "Rule 12" of Gibbs' Rules is "never date a co-worker."

7. The Nickname "LEOs" Is Way Overused

What's a LEO? A "law enforcement officer." Tony and Gibbs used the phrase "LEOs" a handful of times within the first seven minutes of the pilot. I can't say I remember the nickname being used much — if at all — in later seasons, and I can't say I'm disappointed.

8. Gibbs Gets Picked Up By A Woman In A Convertible

No word on who this woman is, but after he gives Kate a job at NCIS, he hops into the convertible — unfortunately, he doesn't actually hop the convertible door — and kisses the mystery woman in the driver seat.

9. Gibbs Is Really Into Woodworking

Who knew Gibbs' little hobby in the pilot would evolve into such a known habit of his?

Now I just have to casually watch the next 281 episodes to see what else I've missed from the following 12 seasons. See you in 2016!