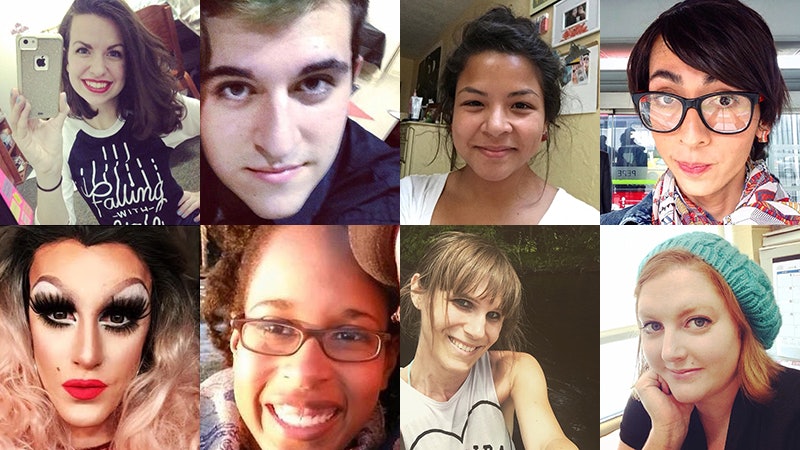 Personally, I love experimenting with crazy hair colors and playing up my strong eyebrows, but for some men and women, makeup truly is more than just skin deep. From Cleopatra’s killer winged eyeliner look to the contouring craze made famous by Kim Kardashian, people have been using makeup to express themselves for centuries. Some use makeup because it makes them feel good while some see it as a powerful tool to tell the world just who they are. After the #PaintYourNailsForBruce campaign began to show support for the former athlete who came out as transgender, then Caitlyn Jenner was introduced to the world, I began to think about just how much changing one’s appearance can really mean.

Who better to have a conversation about gender identity and makeup than the wonderful humans of the Internet? I reached out to people on Tumblr to find out why they wear makeup and what it really means to them. I received an overwhelming amount of responses from straight women, gay men, and transgender individuals. Below are some of the reasons we wear makeup. Spoiler: We all want the chance to be able to define our identity on our own terms.

A lot of people responded that makeup was more than just a bit of fun; it was empowering.

“When I was a teen, I wasn’t allowed to wear makeup. So in the last few years, I’ve been experimenting with different styles. To me, wearing makeup when and how I want is one way I can express my individuality and freedom.”

“I wear makeup sometimes privately because I enjoy it and I think it can be an empowering form of expression. My thought processes are a bit out there and it can make me feel isolated, but a way of coping with that is to wear the ‘strangeness’ that I feel.”

“It makes me feel good, there's an extra boom to your pop when you rock a good makeup look. I posted a picture with a full face of makeup and am trending towards 100 likes; that’s more than any other picture I have posted this year — even the ones of the birth of my children.”

“I wear makeup every day that I leave the house. I love the way I look in makeup, I feel beautiful and flawless. I still feel like it is an outward expression of myself.”

Some women take their feminine looks for granted, but for individuals who are transitioning into presenting as women or embracing a typically female persona, makeup plays a significant role.

“I have a lot of internal fears of being outed, so wearing makeup helps me feel like I'm just a tad bit safer. What sucks as a transwoman is that we're almost never told we're pretty or beautiful; our bodies are just not described that way. We can be sexualized, but we're not ever given those other terms.”

"Makeup is truly a painting art form for me. I love watching the slow transformation from Kyle to Kyra Kennedy; and just like a dance, it never seems to come together until the very end. It's quite thrilling!"

“As a trans-woman, I wear makeup whenever I go out. I usually wear just a foundation, powder and mascara, but it still makes me feel a lot more confident about how I look.”

Whether it’s society or work, some feel like they need to wear makeup to fit the mold.

“I'll be the first to say I feel like I have to [wear makeup] because of our society's beauty standards. Anytime I've gone to work or school without it I get those 'you look tired/sick' comments and it made me self-conscious.”

"I pretty much wear it anytime I know I'll be out of the house. I feel like my eyes especially look 'naked' without it and makeup helps me feel confident. I just don't like the idea that [women] wear makeup in order to be acceptable or appealing to men or any possible partner for that matter."

“I was made fun of for so long, that hiding behind a veneer of sorts made me feel a little less invisible. It became my identity, albeit a false one. Aging has made it feelings resurface again in a rather strong way. I see friends with perfect, wrinkle-free skin and even though I know they engage in cosmetic procedures it's still hard.”

“Since I work with high school students and look like them, I wear full non-gaudy make-up and heels. I always give my face a break two days a week. One day someone from work saw me on a non-makeup day and said ‘Wow, you look really tired.’”

Though their motivations may vary, some find that wearing little to no makeup is a beauty choice in its own right.

“I find myself wearing it much less often and trying to have confidence in my skin now that I have my daughter's little eyes watching me.”

“I don't wear any makeup. I don't always feel comfortable in my skin but going all natural helps me see myself for who I am.”

“In middle school I was against makeup. I was anti anything ‘girly.’ I hated things that followed societal norms for middle school girls, so I dressed how guys dressed, didn't wear makeup, and participated in typical ‘boy’ activities. There's something really cool and freeing with just wearing your regular unpainted face around in your life.”

In the end, the purpose of makeup seems to be just as complex and varied as the individuals who wear it. Whether individuals identify as male or female, gay or straight, or fall somewhere in between, makeup can be a transformative tool. For those who either don’t wear any cosmetics or feel like it’s an obligation, makeup can feel like a fabricated mask. Makeup: It’s a piece of armor, a chore, and a celebration – but no matter what, it’s your choice.