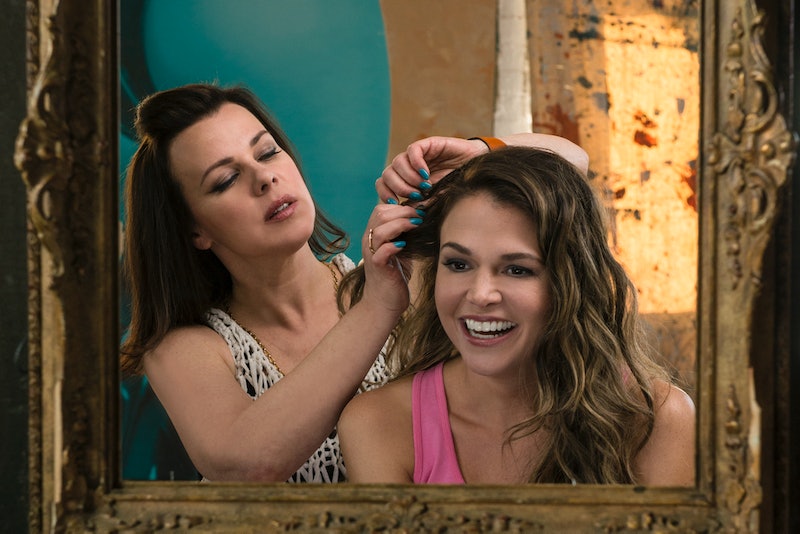 We may have to pull a reverse-Liza Miller and skip forward in time if we want to see more Younger. The season finale is June 9 and it's time to start thinking about the future. When is Season 2 of Younger? The comedy airs on TV Land, as well as Nick at Nite. The series was renewed for another batch of episodes, but a specific premiere date has not yet been announced. That said, I think I can make an educated guess about when we'll be seeing more Younger.

If you haven't seen the show, or plan on catching up before the second season begins, Younger follows an anti-heroine named Liza, played by Bunheads and Broadway star Sutton Foster. The show also stars Debi Mazar and young millennial favorite Hillary Duff. It's a show about coming of age, generational gaps, and second chances — just not in the way you'd expect. On the show, Liza has lied about her resume and, more importantly, her age in order to be hired in an entry level publishing position. She is a 40 year old woman disguised as a 26 year old, with some choice slang and a hip ombré as her secret weapons. The friendships and relationships she makes along the way all depend upon this indiscretion.

The second season will have twelve episodes, just like the first. The first season premiered in April of this year. It makes sense that they would do the same thing next year, and start Season 2 in the spring of 2016.

However, that's an awfully long time to wait. I know this was an early summer, midseason series, but there's no reason that it has to stay this way. The series has been popular. It's a great, feminist-minded show with a variety of complicated female characters at the helm. There aren't many comedies that shed the light on how difficult it is for a woman to re-enter the workforce after having raised a child. The show comes from former producers at Sex and the City and it deserves to be seen.

What I'm saying is there's nothing stopping TV Land, a cable network that doesn't need to rely so much on ratings, from bringing back Younger in the fall television season instead of midseason or summer. That's just my prediction. I have a feeling that Season 2 of Younger will premiere at least in January of 2016, if not sooner. Still, until we get word from the network, we'll just have to live with the reassurance that Younger will return, even if we don't know exactly. when.

More like this
How Is The British Royal Family Related To The Romanovs?
By Karen Fratti
Netflix Bumped Up The 'You' Season 4 Premiere Date — Here's What To Expect
By Bustle Editors
'Blue Story' Fans Will Recognise 'The Confessions Of Frannie Langton’s Karla-Simone Spence
By Maxine Harrison
'Bridgerton' Fans Will Love ITV’s 'The Confessions of Frannie Langton'
By Maxine Harrison
Get Even More From Bustle — Sign Up For The Newsletter