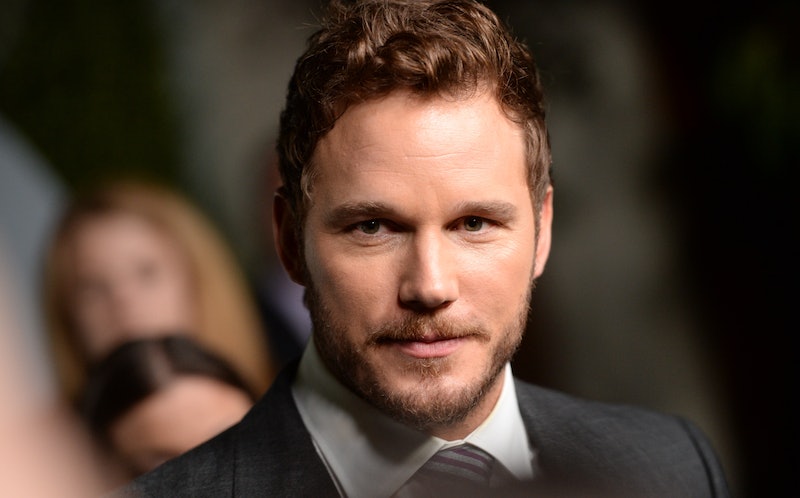 Considering he's talented, hilarious and all-around charming, it's hard to imagine that anyone could ever be mad at Chris Pratt. However, it looks like it's possible — particularly if you're NBC, around the time Season 2 of Parks and Recreation was airing. According to the actor himself during an appearance on The Graham Norton Show, he got a stern talking-to after he stripped naked during an episode of Parks and Recreation.

Yep, that's right. Pratt decided that the wardrobe-provide skin-colored underwear weren't helping him get in the mood for the scene — so he just took it all off. That guy, eh?

"We were shooting a scene where my character turns up naked at my costar's door," Pratt explained during the appearance. "I was wearing skin-colored underwear and I wasn't getting quite the right reaction I was hoping for. It was late in the day so I decided to improvise and drop my trousers for the take ... [Poehler's] reaction was great!" Pratt said. "It was the take they used!" (In case you want to relive the scene, it happens during "Kaboom," which is episode six of Season 2... or you can just check out the GIF below to watch the awkwardness again and again.)

While Parks and Rec fans might fondly remember the Season 2 scene (and Poehler's priceless response), it turns out that NBC wasn't too pleased about Pratt stripping down: "I got a letter from NBC's HR department that said, 'There is protocol about nude scenes. This is not a joke and you are being reprimanded and you can't go around telling people about this like some kind of joke!'" he said.

And, in true Chris Pratt form, he's shaking off the lecture in the best way possible: "I've framed the letter!"

Despite NBC's response, though, the scene was still pretty well-received when it aired: After the episode aired in 2009, the A.V. Club called out the moment as one of the best so far from Parks , with critic Steve Heisler writing, "That scene was by far the highlight of the series, and demonstrates something key about season two of Parks and Rec: The characters have to keep us guessing."

Here's hoping that Pratt continues to be fearless — and maybe earn a few less warnings from HR.