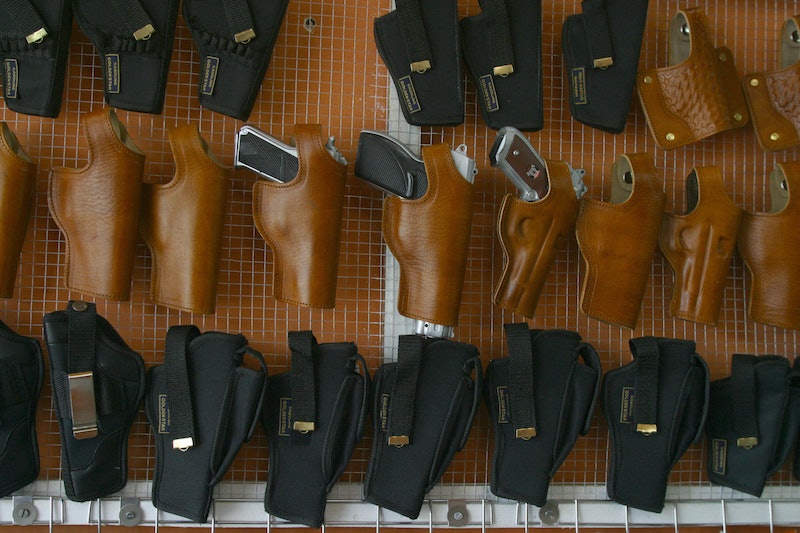 A new open-carry handgun law passed the Texas state legislature on Friday, giving gun advocates the win they've been searching for since the state outlawed open-carry in 1871. While the state has always allowed residents to carry rifles and shotguns openly, it was the first to ban its citizens from carrying handguns outside the home. Now, with Gov. Greg Abbott promising to sign the bill first thing Monday morning, gun enthusiasts have already begun celebrating the win. But at least a few in the capital have expressed concern over the new measure, despite outspoken support from the majority.

Many on the Republican side of the state legislature indicated, however, that the time had come for Texas to move forward where other states had already ventured.

"We think of Texas being gun happy, but we didn't afford our citizens the same rights most other states do [until recently]," said Republican Rep. Larry Phillips, who also authored the bill, in a comment to the AP.

Immediately after the bill had passed, Texas Gov. Greg Abbott took to Twitter. "Open Carry just passed in both the Texas House & Senate," he tweeted victoriously. "Next destination: My Pen."

Texas has long maintained a surprisingly lax view of gun control, when compared to other states — a tradition dating as far back as pre-Civil War days.

"Until the mid-1860s, a prohibition on dueling was Texas' only restriction on firearms," reported The Houston Chronicle last December. But through the early and mid 20th century, prohibitions on handguns were kept in place, despite their unpopularity — something that legislators used to wield dominance over black citizens and other minorities, historians claim. With pick-and-choose justice, officials would often punish residents of color by forcing them to pay fines of up to $500.

"Whoever was in power could selectively enforce those laws against those they didn't like," explained attorney Stephen Halbrook, an expert in gun history, to The Chronicle. "There has always been a lot of racism in the way these kinds of laws have been enforced."

During exhausting debates over the newly-passed measure, several legislators attempted to add on a provision, known as a "cop-stop", that would have limited the ability of police officers to randomly stop anyone openly-carrying a handgun and ask for a license. Supporters of the amendment argued that passing the bill without it would allow officers to profile citizens based on race. Several Republicans also spoke up in favor of the amendment, saying that it would prevent unlawful search and seizure of gun owners.

"I'm disappointed that the amendment didn't stay on, but it's still the law, nonetheless," said Democratic Rep. Harold Dutton, who authored the amendment, in a statement on Friday. "I expect law enforcement to follow the law and we'll be watching to see to make sure they do."