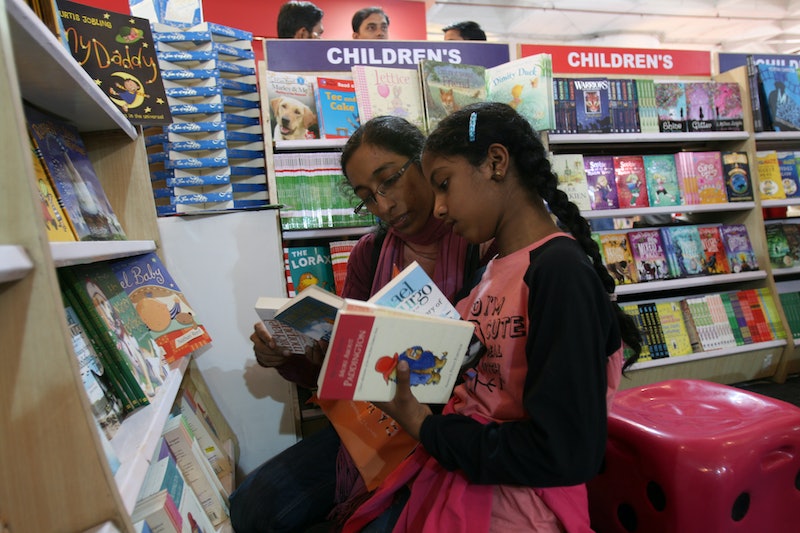 We Need Diverse Books has proven its clout over the past year, and at BookCon 2015, WNDB showed that it’s grown from a grassroots social media movement to a fully-fledged, independent organization. On Sunday, We Need Diverse Books brought in powerhouse writers Aisha Saeed, Libba Bray, Soman Chainani, David Levithan, Meg Medina, Jacqueline Woodson, and moderator I.W. Gregorio to talk about the massive strides the organization has made over the past year in bringing awareness to the lack of diversity in YA novels, and also to talk about what has to happen next.

Many writers lauded the power of social media to shed light on issues like the lack of authentic representation of minorities in children’s literature. As Jacqueline Woodson pointed out, “the ferocity of young people” sharing their opinions (and, well, rage, too) on the Internet is astounding — especially when it’s being used for good. Woodson equated the We Need Diverse Books movement — which began completely on social media with the #WeNeedDiverseBooks hashtag — to the increased awareness in police brutality over the past couple of months.

“It wasn’t until social media took these issues and put them out into the world,” the bestselling author of Brown Girl Dreaming said, “that other people started realizing, ‘Oh, yeah, that’s something I want, too,’ in terms of being able to walk safely through the streets without being gunned down by a cop, and wanting to walk into a bookstore and see books by all kinds of people about all kinds of issues.”

Thanks to the power of social media, of book lovers, and of the hard workers at WNDB, diverse books are becoming more powerful — and better — than ever. Here are just eight reasons why.

Diversity Is No Longer Seen As A Disadvantage

Rather than sticking to the classic identity crisis trope, Chainani said, “to me it’s more important to tell stories that are real. At the end of the day, if you can read a story about a diverse character in the lead that has nothing to do with them coming to grips with their color or their culture, and instead celebrating it, that to me is the greatest victory, and that’s what I think we’re pushing [for].”

Characters With Disabilities Are Being More Widely (and Accurately) Represented

At 18, Libba Bray was involved in a car accident that "demolished one side of [her] face." She also lost her left eye. Bray spoke about how writing about her experience "saved her life," and how important it is to her to accurately portray the intense emotions people with disabilities experience.

One of the things that drives me a little crazy is that whenever there’s a character with a disability, a lot of times what you get is this saintly character. And that used to drive me crazy, because the thing is, when you’re going through these things, a lot of times what you feel is “Fuck you!” And as a girl, I wanted that. So just to be able to have that full spectrum of emotion represented and not get locked into, "Well, this is what you’re allowed to have" [is important].

The Authenticity of the Diverse Experience Is Encouraged...

“What ends up happening," Medina said, "is that [publishers] end up scrambling, saying, 'I need to have an African American character! I need to have a character in a wheelchair!' … But the [thing] is, you have to write people: the richness of their families and of their experience, not just their outward experience. Not just their stereotype. So it is important to do your research, to write authentically, and I really think it’s important to concentrate on writing the human being first … So how do you get it right? You have to live a diverse life.”

...And Tokenism Is No Longer Tolerated

Jacqueline Woodson echoed Medina's thoughts about the importance of accurately representing diverse characters. She also warned against writing diversity just for the sake of writing diversity. But if it's done well, the benefits are tremendous.

I think that creating diverse characters who are wrong sends a much more dangerous message than not creating them at all. But part of the diversity conversation that I’m excited about is that it’s part of a much larger conversation about people not living diverse lives, and choosing not to live diverse lives … and that’s the direction we’re moving. It’s how can we create a world where we can all walk safely through it. And hopefully all walk through it safely together.

We all loved watching Disney movies, right? But writers like Soman Chainani are exposing the horrifying representations of minorities in outdated movies and literature, and they're consciously reworking those narratives to include a wider, and more accurate, experience.

The School for Good and Evil is a complete evisceration of Disney’s ageist, sexist, racist, white-washed representations, and growing up, I was obsessed with fairytales and Disney movies. I watched them non-stop from when I was about six to thirteen [without] questioning them. But when I went to college, I took a course that equated pornography with [specifically] Disney movies ... Essentially, at the surface, they're there to give you a fantasy to believe in, but if start poking at the surface and see what’s really there, it actually becomes quite grisly and macabre and lurid. So I thought, what if I wrote my own story that looks like a Disney story on the surface? … But as the book goes on, it starts to implode those [stereotypes] ... So by the end of [the book], you have trans characters, gay characters, characters whose race has changed … But I had to start with the ultimate "not diverse" image.

Woodson spoke about how she was "stunned" by Brown Girl Dreaming's overwhelmingly positive reception. "But it’s a deeply, deeply, deeply personal story," she reflected, "and I think people respect that. I think, in terms of writing, the more specific you get, the more universal the writing is, [and] the more people it touches.”

...and the Community Is Hungry for More of These Stories

Aside from being the bestselling author of books like Two Boys Kissing, David Levithan is a publisher and editorial director at Scholastic. He reflected, from an insider's perspective, on the publishing world's desire to put more diverse stories out into the world. The only way that can happen, though, is if those stories are written.

There are so many of us in publishing who are looking for [diverse literature], and we’re just not getting it … So all we can do is to encourage writers across the spectrum of diversity to write from their own experiences, or to really do the work and write from other experiences, too. The only way that our literature will diversify is if more people write more books along diverse themes. Publishers alone cannot create them. It is up, essentially, to the writers to do that … So I encourage writers to do it, but to do it well.

What's Next? Book People Must Push The Boundaries of a Stereotypically White Profession

Meg Medina offered important advice to young people looking to get diverse stories out into the world. The gist? It takes more than just one writer to get a book published: it takes a team, and there must be diversity among that team, too.

You know, the book world includes authors, but it also includes editors, publicists, [and] literary agents, and we need diversity in those roles too. It’s important in terms of the sensitivity … and a sense of thinking, "I can do this job … I know how to create relationships between different communities." So if you love books, think about where you would fit in in terms of writing and publishing along the entire spectrum.

It's clear that WNDB is more powerful than ever — just take one look at that room full of badass writers.