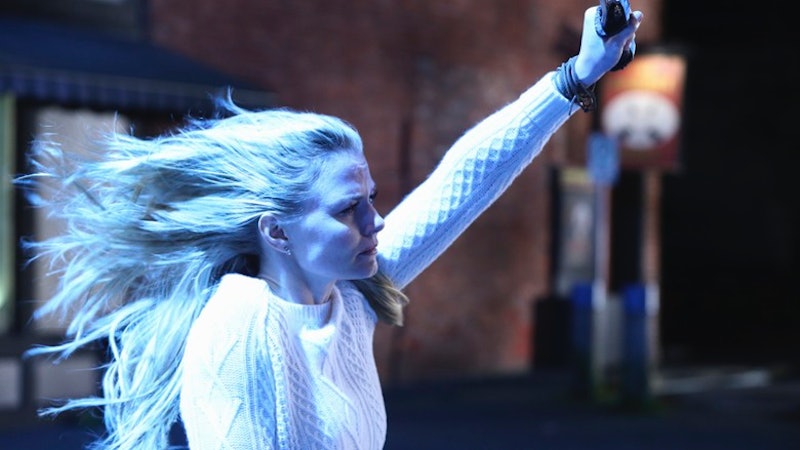 Once Upon A Time's Season 4 finale aired weeks ago, but if you're anything like me, you're probably still reeling and feeling like an emotional wreck from everything that unfolded in "Operation Mongoose". Most devastating of all had to be Emma's self-sacrifice, turning her from the Savior to the new Dark One in an effort to preserve Regina's happy ending. The fact that the one person who anchored all of Storybrooke in (relative) goodness and kept everyone in line is now the one that needs saving is a scary prospect, and those Emma left behind sure have a challenge on their hands if they want to get her back. And while the quest to find Merlin so that he can contain the Darkness once and for all will undoubtedly be a major focus of Season 5, something tells me we've got a bigger problem on our hands than Emma's transformation.

That's not to say, of course, that Emma's struggle isn't a real and important one, and one that deserves to be highlighted. While her role as the new Dark One is, in some small way, a fulfillment of an alternate fate her parents made sure she never experienced before she was even born, at heart, Emma is the Savior and I have faith she'll survive this in one way or another. After all, Gold was a coward before he ever took on the Darkness. He had no shield with which to protect himself from its effects, nor any desire to do so. Emma, however, is the product of True Love and holder of light magic. She's got Henry and her parents, Hook and Regina. In other words, she has every reason to let the goodness win.

There's one person, whoever, who doesn't. The back half of Season 4 reintroduced one of Once's most notorious love to hate (hate to love?) villains: Zelena. She's the Wicked Witch of the West and just so happens to be Regina's half-sister. She's rotten to the core and hell-bent on destroying Regina's happiness by any means necessary, which apparently included killing Robin Hood's wife Marian, then impersonating her as she manipulated him into having sex with her and getting her pregnant. And, while the season finale saw Zelena powerless (thanks to a cuff which somehow stifles all magic) and locked away in what looks to be a rather secure prison, something tells me she might pose the biggest threat of all come Season 5, and it seems I'm not alone in that theory.

Lest we forget that it wasn't so long ago that Zelena got hold of the dagger when it was Rumpel's name inscribed upon the blade, and she used it to control and manipulate him to her own ends. Given Zelena's obsession with destroying everything Regina holds dear, all it would take is for the Wicked Witch to get a hold of Emma's dagger and use Emma to hurt Regina, Henry, and anything else of value in Storybroke, and Emma would be powerless to stop herself. Of course, Zelena will need to escape her cell and get her magic back before any of that would be possible, but this is Once Upon A Time we're talking about, here. It's hardly far-fetched.

Josh Dallas, known as Prince Charming on the show, has already promised that "the new big baddie is going to be really bad. It's the unimaginable." And while it might be tempting to assume that Dallas was referring to Emma's move from hero to villain, any Once fan should know better than to take things at face value. Zelena hasn't been brought back and locked away in a basement cell for nothing, and she won't take kindly to her prisoner status for much longer. The only logical conclusion is that she'll strike back in Season 5, which will prove disastrous for the residents of Storybrooke, and her sister in particular. Or, you never know, maybe Zelena will help Regina find a way to save Emma and restore the Savior to her former self. You never know.