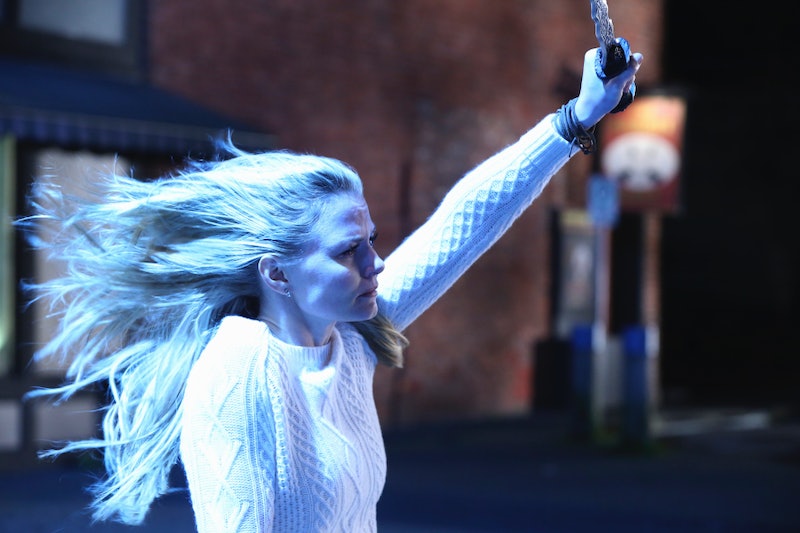 What happens when a Savior becomes the most dangerous villain of them all? It's a question Once Upon a Time Season 5 is looking to explore in great depth now that Emma has become the new Dark One. How will she be different? Will she still love Hook? Is there an Intro To The Dark One class she has to take? Right now it's hard to say for sure how greatly this change-up will alter the Emma Swan we've come to know. But given all of the dark matter she just absorbed, I have a feeling it's bound to drive a wrench between Emma and her loved ones, no matter how supportive they try to be. And while being forever linked to a dagger doesn't sound like the greatest thing in the world, this magical upgrade comes with some very beneficial perks.

I mean, don't get me wrong — it definitely sucks that Emma was forced to make such a big sacrifice for the team, especially since her life was only just starting to get back on track. That being said, though, I can't deny how excited I am to get back to basics and focus on our core cast again rather than some new villain of the week. Emma has officially gone dark. It's not an ideal situation, but what's done is done. And given that I'm more of a "glass half-full" type of person, I thought that, instead of focusing on everything Emma might be losing, let's have a look at what she's actually gaining. Because, as we've seen, dearies, being the Dark One certainly has its advantages. For starters…

We're talking about unlimited magic here. So if you thought Emma was powerful with just her Savior abilities, imagine what she's capable of now.

As long as Emma remains the Dark One she gets to retain everlasting life. That's like getting to become a vampire without the gross bloodlust side effect. So the way I see it, that's basically a win-win.

And I'm talking about something way better than Emma's alleged lie detector "superpower." She will now have unlimited knowledge about pretty much everything at her fingertips. Think of it this way: if there was a fairytale equivalent to Harvard, Emma would be class valedictorian.

I assume it's all part of some Dark One PR strategy.

Do you know how much something like that would normally cost? Engravings are expensive, people!

Just the mere mention of the Dark One's name is enough to strike fear into the hearts of a thousand fairytale characters. Talk about impressive street cred. Emma's badassery just reached a whole new level of awesome.