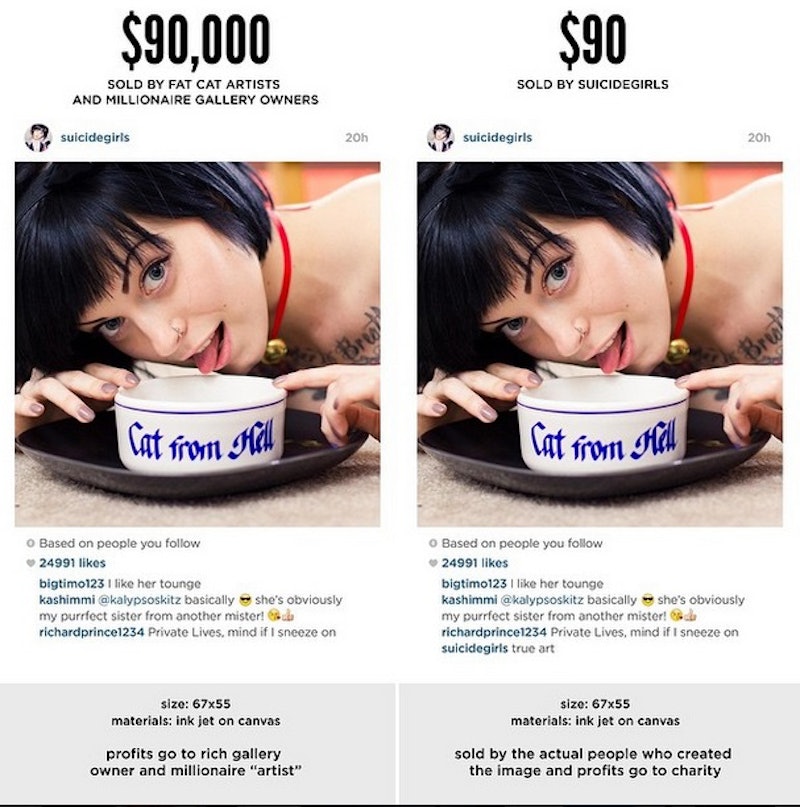 Remember that guy who was taking other people's Instagram pictures and selling them for tens of thousands of dollars? It looks like somebody has finally taken him down to size: artist Missy Suicide is selling prints of the pictures Prince used in his exhibit. I think this exact scenario is why they came up with the phrase, "If you can't beat 'em, join 'em."

In case you don't remember the initial Richard Prince controversy, a quick recap: artist Richard Prince took photos from people's Instagrams, blew them up on a canvas, and sold them for roughly $90,000. He didn't ask permission from the original photographers, and he didn't give them any of the money he made off the prints, either. It's pretty douche-y, but not necessarily illegal to do.

So, what do you do when someone is basically ripping off your photos and taking in a boatload of money doing it? You rip off their ripped off photos. Which is exactly what Missy Suicide did: in the same way that Prince used her Instagram photo, tacked on a [weird] caption on the bottom, then enlarged and sold it, she "appropriated" Prince's print, added the caption "true art" underneath his, and then put it up for sale. Genius. The best part? She's selling the same pictures (which were hers to begin with, anyway), but for only $90 a pop, versus Prince's $90,000. Oh, I lied. The actual best part is that the profits are going to charity.

(As a side note, Richard Prince, if you're reading this: can you kindly explain the meaning behind "Private lives, mind if I sneeze on"? Is it some weird sex thing? I bet it's a sex thing. Anyway, moving on.)

Prince is apparently not too busy rolling in his Instagram money to know what's going on — he found out about what Missy did and had this to say on Twitter:

I guess at least we know if nothing else, Prince isn't a hypocrite, since he doesn't care that his appropriated work is being appropriated. Does this mean he's going to stop using other people's work? Probably not. But at least we can all tip our hat to this one woman's clever response. Or maybe the moral to this story is if you have artsy photos, you should try to beat Prince to the punch and get them into a gallery first?

In related news, I will now be selling life-size prints of my Facebook statuses. All proceeds will be donated to the Sara's Rent Foundation.