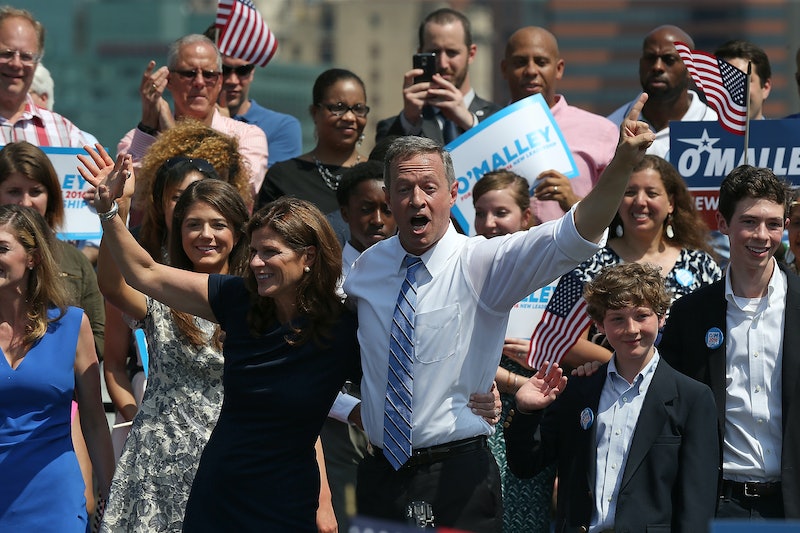 The newest addition to the 2016 presidential race is not a widely known politician outside his home state of Maryland. But the former governor, who also served as the mayor of Baltimore for two terms, has long been a rising star in the Democratic Party. He's been unwavering in many respects of his policies, but Martin O'Malley's views on women's rights and reproductive health are particularly strong.

This may come to a surprise to some, considering his Catholic faith and his noted "Catholic values," but O'Malley is a full supporter of both abortion rights and increased access to contraception. O'Malley has received a "100 percent" rating from NARAL Pro-Choice Maryland, who once praised him for chewing out former Virginia Gov. Bob McDonnell on state-mandated ultrasounds. "Nothing says jobs like transvaginal probes," O'Malley said in 2012, throwing some very public shade at McDonnell.

O'Malley's high marks from NARAL are proven by his track record. In 2002, while he was serving as mayor of Baltimore, aides confirmed that O'Malley supports legal abortion and fair access without interference from the government until the point of viability. He also supports late-term abortion when the life of the mother is at risk, or when the fetus has a severe abnormality. And according to NARAL Pro-Choice Maryland, O'Malley has not infringed on abortion rights by signing any new abortion restrictions during his tenure as governor.

When it comes to birth control, O'Malley has increased access to contraception and pregnancy counseling, particularly among low-income women. In 2012, O'Malley signed the Family Planning Works Act, which greatly expanded reproductive-health access by providing low-income women with free pregnancy counseling and Medicaid-funded contraception, STI testing and cancer screenings. According to RH Reality Check, the act would provide these subsidized medical services to an additional 33,000 women in the state.

Martin O’Malley has been a strong advocate for women’s health and rights. As governor of Maryland, he worked to protect women’s access to safe and legal abortion and also supported access to affordable birth control. During his term, he signed a law that ensures low-income women in Maryland have access to free pregnancy counseling, contraception, as well as lifesaving cancer screenings.

O'Malley has also promoted increased support for new mothers (and fathers) by signing the Maryland Parental Leave Act in 2014. The law expands parental leave for working parents, requiring Maryland small businesses to provide at least six weeks of unpaid leave for the birth of an employee's child. Prior to the law, small businesses were exempted from providing unpaid family leave.

Now, O'Malley is pushing further, advocating for paid family leave — a rarity in the United States, though not in most industrialized nations — as well as expanding overtime pay to middle-class workers. O'Malley wrote in a February op-ed published in POLITICO:

Unfortunately, Republicans’ aversion to compromise means that many of the common sense economic policies that would most effectively help middle class families make ends meet, like paid family leave and ensuring equal pay for equal work, are stuck in the mud—just like Americans’ wages.

He added that expanding mandated paid overtime would overwhelmingly benefit women. "Raising the overtime threshold would ensure that millions of Americans, especially women and younger workers, receive the compensation they’re owed for putting in extra hours at work instead of spending it with their families," O'Malley wrote.