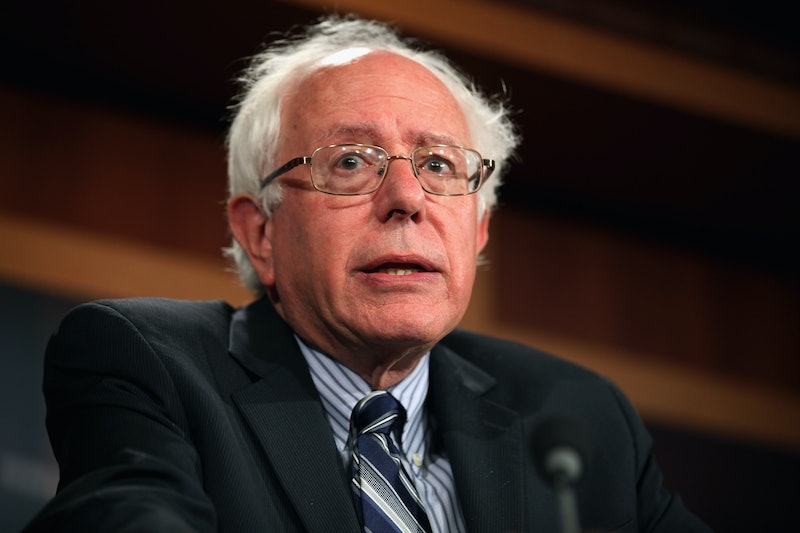 So, Bernie Sanders. The lone socialist in the sea of capitalists. The unlikely presidential candidate with an even more unlikely fan base. The one-time advocate for violence against women — wait, what? The Bernie Sanders once published a rape-fantasy satirical piece in a now-defunct Vermont weekly, and the content has both the conservative and feminist blogospheres dragging Sanders across the hot coals. This could be Sanders' Todd Aiken moment — or it could just be digital-age election politics at its finest.

Earlier this week, Mother Jones published a "making of" feature on the fringe politician from Vermont who now finds himself not only in the national spotlight with a growing — and vocal! — voter bloc, but also as a serious contender for president. It is, indeed, a pretty radical journey, especially for a guy who is the only high-ranking American politician to embrace the word "socialist." (Although he's running for president on the Democratic ticket, Sanders is an independent in the US Senate and identifies as Democratic socialist.)

But the most bizarre aspect of Sanders' political rise is a 1972 satirical essay he penned for the Vermont Freeman, an alternative newspaper. Mother Jones published an archived copy of the piece, titled "Man-And-Woman," which explores the colossal-shifting gender roles of the time, thanks to the women's liberation movement. Yet the essay opens with a bit of transgressive humor that may have been lost over the last few decades of anti-rape advocacy and increased awareness of violence against women.

A man goes home and masturbates his typical fantasy. A woman on her knees, a woman tied up, a woman abused.A woman enjoys intercourse with her man — as she fantasizes being raped by 3 men simultaneously. The man and woman get dressed up on Sunday — and go to Church, or maybe to their "revolutionary" political meeting.

A woman fantasizes about being gang-raped, Sanders? You could almost hear the collective "oh no, oh no, oh no," of feminists and liberals everywhere.

Sanders' defense of the rape fantasy? It was the 1970s, guys. Things were weird then.

OK, not really. Earlier this week, a Sanders aide tried to brush off the essay as a false controversy triggered by a little bit of satirical humor that should probably should stay in decades past. But in an interview with The New York Times on Friday, Sanders recanted his self-admitted poorly written essay (personally, I think he turns some nice phrases — don't sell yourself short, Bernie!). The Vermont senator explained:

It was a poorly written article dealing with gender stereotypes of the period, in the sense that a lot of men have the feel to be all powerful and controlling. Women have the feeling they have to be dependent. It was very poorly written in a way I certainly would not write it now. But if you read it, what you find is that is a bad situation for both people: women shouldn’t be dependent. Men should not be oppressors. We want a society where people are equal. That was about it was about.

And that's exactly where the essay goes, if you read it in full. Sanders challenges men's attraction to heinous rape stories — "why [do] the newspapers with the articles like 'Girl 12 raped by 14 men' sell so well?" — and why women still face the cultural pressure of being dependent on, or subservient to, men. Unfortunately, opening the essay with a woman being turned on by gang rape seemed much more than poor taste in satire — it now raises some questions about a young, ultra-progressive Sanders' views on rape against women. In other words, did young Sanders believe all women were secretly asking for it? Is he sexist? Or maybe just a little creepy?

Jezebel's Anna Merlan had the "creepy little essay" reaction, but, she writes, it's not that shocking because it's coming from "an aging hippie who — theory — might have been stoned out of his gourd while writing this thing."

"Sanders’ essay in no way conflicts with his beliefs today," Merlan adds on Jezebel. "Just talks about sexy stuff, and some people want to believe that’s enough to sink him, somehow."

Meanwhile, numerous conservative blogs are crying foul, believing the media's non-attention to Sanders' essay is evidence of the ultimate "lamestream" media double standard: The public will ignore a liberal politician's sexualized rape fantasies, but scorn a conservative once the word "rape" comes out of his or her mouth.

"It is unclear where Sanders acquired his early expertise on male and female sexual desires," writes Dan Joseph at the conservative Media Research Center. "But what is clear is that had Ted Cruz or Rick Santorum wrote something along these lines — even 40 years ago — the media wouldn't stop talking about it for weeks."

Town Hall's Katie Pavlich agreed, and even brought Bill Clinton into the mix:

What Sander's wrote is horrifying and it's inexcusable, but lets put this into perspective.

But one of the biggest conservative outlets, the National Review, had a different take. Charles C. W. Cooke asks, "Who cares?" Because, like, it happened 43 years, it was 1970s, Sanders was a radical who also, at one point, wanted to legalize hitchhiking, and what's truly important is his recent political track record:

Sure, the Democratic party would crucify a Republican for the same offense. But they shouldn’t. A society in which people are drummed out of politics for things they wrote 43 years ago is an ugly society indeed. Sometimes the best way to address hypocrisy is to take the high road. This is America: land of second chances. This is a place of redemption and of reinvention and of continual learning. Nobody honestly believes that Bernie Sanders is a sexual pervert or that he is a misogynist or that he intends to do women any harm. Nobody suspects that he harbors a secret desire to pass intrusive legislation or to cut gang rapists a break. Really, there is only one reason that anyone would make hay of this story, and that is to damage the man politically.

It's honestly one of the most even-handed and reasoned takes on Sanders' "Man-and-Woman" essay, and Cooke is right when he brings up Sanders' political record. While serving in the Senate, Sanders has co-sponsored several anti-rape bills, including a re-authorization of the Violence Against Women Act (first championed by other noted women's advocate, Vice President Joe Biden) and a bill targeting the massive rape kit backlog, which has blocked thousands of victims of sexual violence from receiving justice. There is no way that Sanders adheres to such pervasive misogynist beliefs that he would then try to legislate on American women.But that's where I disagree with Cooke: There are some conservative politicians, such as Todd "Legitimate Rape" Aiken, who have either tried or advocated for draconian legislation that stemmed from misguided patriarchal (and perhaps even religious) beliefs on rape. We have even seen this in Congress this year, where Republicans have tried to put intrusive restrictions on rape and human trafficking victims who are pregnant and in need of an abortion. It worked in the House's 20-week abortion ban, which places a waiting period on rape victims who haven't reported their assaults to a federal or law enforcement agency, requires underage incest victims to put their safety at risk by documenting their crimes to a federal agency, and blocks incest victims over the age of 18 from receiving an abortion. Sanders, however, has never voted for any bill that would burden, harm or threaten the safety of victims of sexual violence. So, too long, didn't read: You are not a sexual deviant if you support Bernie Sanders. But Bernie, don't quit your day job — leave the satire to Stephen Colbert.Images: Getty Images (2)