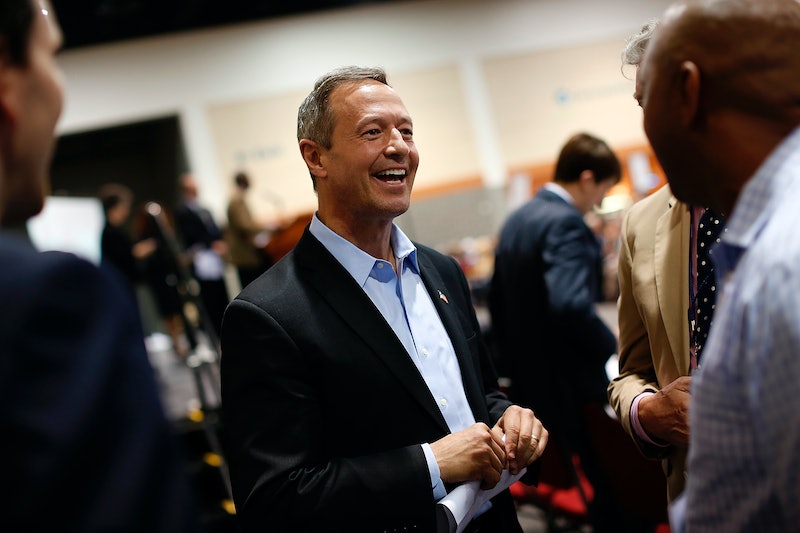 Martin O’Malley may have just entered one of the nicest Democratic primaries in a long time. With his announcement on Saturday morning, the former Maryland governor has officially launched his 2016 presidential campaign and joined a team of three Dems vying for a spot in White House — but you wouldn’t know it from the niceties being tossed back and forth within the left-wing of U.S. politics these days that make all previous campaigns look like an all-out brawl. So how long will it take before O’Malley, former Secretary of State Hillary Clinton, and Vermont Sen. Bernie Sanders stop playing nice?

It might be a while before the public finds out, considering how carefully the three have been circling one another in recent days. Previous to his campaign launch on Saturday, O’Malley had long been considered a Clinton ally, given his endorsement of the former Secretary during her 2008 presidential bid.

“Senator Clinton has spent her entire life being a champion for the working families whose hopes and whose dreams are the very core of our nation,” said then-Gov. O’Malley to an audience of Clinton supporters in Annapolis, Maryland on May 9, 2007. O’Malley then gave Clinton his endorsement with “great pride and enthusiasm," calling her a close “friend."

Eight years later, O’Malley has now launched a White House bid of his own — but the general niceties of his relationship with Clinton remain. In a statement on Friday, O’Malley spokeswoman Haley Morris hinted that the former Baltimore mayor had grown tired of the former secretary’s policies.

“Governor O'Malley has tremendous respect for Secretary Clinton, but times change,” said Morris. “We need new leadership to address our nation's big challenges right now — from the continued law breaking on Wall Street to a broken economy that's leaving too many Americans behind.”

O’Malley has been critical of Clinton’s various stances before. In an April visit to the Harvard Institute of Politics, O’Malley subtly drew attention to Clinton’s flip-flopped position on same-sex marriage. As late as 2014, Clinton had expressed support for keeping the marriage issue at the state level, but in a statement in April this year, her camp stated that she was supportive of a pro-gay marriage Supreme Court ruling.

“I believe marriage is a human right, not a state right,” O’Malley told attendees prior to his speech. “I’m glad she’s come around to that position.” He later added that he believed Democrats were “best as a party when we lead with our principles and not according to the polls.”

On the surface, O’Malley’s comments came off as a typical political jab. But given his willingness to reach out and call her ahead of his campaign announcement, the barb seemed harmless. And when compared to the bombs launched by opposing GOP camps in 2012, this cycle’s Democratic candidates look relatively tame.

In 2012, for instance, Republican candidate Newt Gingrich said in an interview with Fox News that conservative opponent Ron Paul “didn’t care” about national security because he was willing to allow Iran the ability to created a nuclear weapon. Paul countered by calling Gingrich a “chicken hawk” for not serving in Vietnam while supporting military policies that sent an increased number of troops overseas in an interview with CNN in January that year.

Not to be outdone, former Pennsylvania senator and 2012 GOP candidate Rick Santorum threw his hat in the ring, telling a group of Fox & Friends reporters that Paul was “disgusting” for challenging his views on abortion. Santorum must have been on a roll at the time too — within the span of a few months, he called out former Massachusetts Gov. Mitt Romney “bland” and “boring” in an email to supporters, and later, in a March 2012 interview with Piers Morgan on CNN, stopped just shy of calling him an outright liar for denying he had flip-flopped on his healthcare stance.

Seven months later, in a tense October GOP primary debate in Las Vegas, Nevada, then-Texas Gov. Rick Perry called Romney a “conservative of convenience” and a hypocrite, prompting Romney to deny the vehemently deny the accusation. When Perry continued interrupting him, Romney reached out and placed his hand on Perry’s shoulder, saying:

This has been a tough couple of debates for Rick, and I understand that, so you're going to get testy. You have a problem with allowing someone to finish speaking. I suggest that if you want to become president of the United States, then you need to let both people speak.

By comparison, O’Malley’s quip in April that Clinton had come around to the “right” position was almost flattering.

O’Malley isn’t the only Democrat in the race who has shown surprising generosity to his opponents. In an interview with CNN on Sunday May 17, Sanders, a self-proclaimed Democratic socialist who has called out Hillary Clinton’s policies for not being progressive enough, told the news network:

In an earlier interview with The Los Angeles Times, Sanders explained that he didn’t “believe in trashing [his] opponents” and that he wasn’t planning on starting anytime soon.

Of course, no matter how nice the left seems to be playing at the moment, no political retort is complete without a bad joke, and even O’Malley can’t resist slipping one in every now and then. Prior to announcing his bid for the presidency on Saturday, the former governor visited ABC News’ The Week to address the present state of politics and the possibility of a 2016 run. Remarking on rival Clinton’s established Washington legacy, he had this quip, which he echoed in Saturday's announcement:

Let’s be honest here. The presidency of the United States is not some crown to be passed between two families.