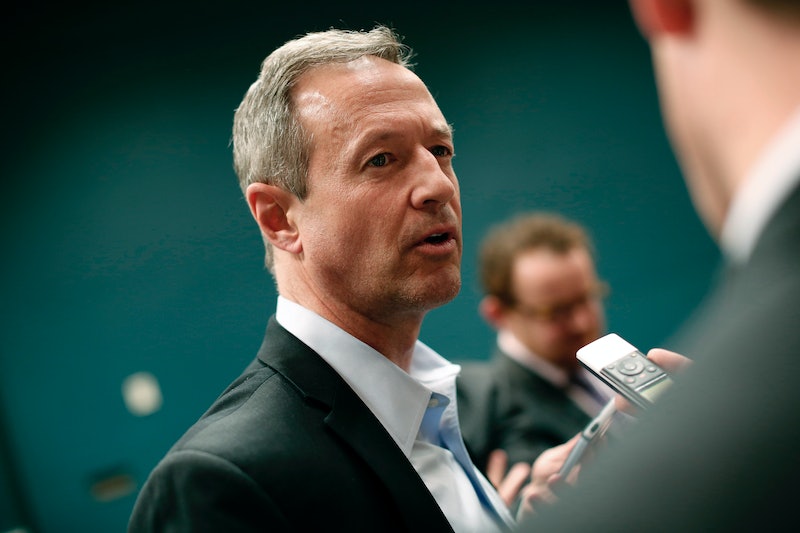 Former Maryland Gov. Martin O'Malley officially entered the 2016 presidential race Saturday, joining a much less crowded field than his Republican competitors and boasting a message of revival. "We must save our country now," O'Malley said, speaking to a crowd at Baltimore’s Federal Hill Park. "And we will do that by rebuilding the dream."

O'Malley, a Maryland native who served as the mayor of Baltimore before taking on two terms as governor, has long been a bigwig in the Democratic Party. But the Irish-Catholic Democrat, who left the governor's office in January, will be facing arguably the toughest of all challengers in this 2016 race: Hillary Clinton. And like fellow Democratic candidate Sen. Bernie Sanders of Vermont, O'Malley isn't going to go easy on her.

It was even obvious from Saturday's formal announcement speech, where O'Malley made reference to Clinton's established political history and all-but-certain nomination win, according to NPR. "[The presidency is] not a crown to be passed between two royal families," O'Malley told his crowd of supporters, throwing some extra shade at Clinton and prospective presidential candidate Jeb Bush.

O'Malley even reportedly called Clinton a day before announcing his presidential bid, speaking to her about his upcoming campaign and stating that it's time for "new leadership" in America, TIME reported. Now, it's expected that O'Malley will continue to push Clinton to the left on issues, as is Sanders, the self-identified Democratic Socialist.

Here's when and why Martin O'Malley has criticized Hillary Clinton is recent months...

O'Malley has been an ardent supporter of LGBT rights, signing a bill to legalize same-sex marriage in Maryland in 2012. But for Clinton, same-sex marriage has always been a murky issue. In 2014, Clinton said in an interview with NPR that same-sex marriage was a states rights' issue, but now, her campaign has changed its tune. A Clinton campaign spokesperson said in April that Clinton "supports marriage equality and hopes the Supreme Court will come down on the side of same-sex couples being guaranteed that constitutional right."

While speaking at the Harvard Institute of Politics in April, O'Malley took a jab at Clinton, accusing the former secretary of state for flip-flopping her position. O'Malley told reporters:

I believe marriage is a human right, not a state right. I’m glad she’s come around to that position.

During that same speech at Harvard, O'Malley criticized Clinton over another contentious part of her track record: her position on driver's licenses for undocumented citizens. A Clinton campaign spokesperson told The Huffington Post in April that she now "supports state policies to provide driver’s licenses to undocumented immigrants."

I’m glad Secretary Clinton’s come around to the right positions on these issues. ... I believe that we do our country a disservice when we make it harder for new American immigrants to abide by the rules of the road and obtain drivers licenses. And I’m glad she’s come around to that position now too.

On her history with corporations & Wall Street

O'Malley first rolled out his "between two families" line in a March interview with ABC's George Stephanopoulos, who, as it turns out, has donated to Bill and Hillary Clinton's global foundation. "The presidency of the United States is not some crown to be passed between two families," O'Malley told Stephanopoulos. "It is an awesome and sacred trust to be earned and exercised on behalf of the American people."

But the former governor's bigger criticism took on Clinton's relationships with financial and corporate executives, who have given her massive fees and donations over the years. O’Malley expressed some doubt on whether or not Clinton could now stand up to her former donors and powerful (and wealthy) friends:

We need a president who is on our side — a president who is willing to take on powerful, wealthy special interests in order to restore that sort of American economy where, wherever you start on the earning spectrum, you can get ahead through your hard work. ... Will she represent a break with the failed policies of the past? I don’t know.