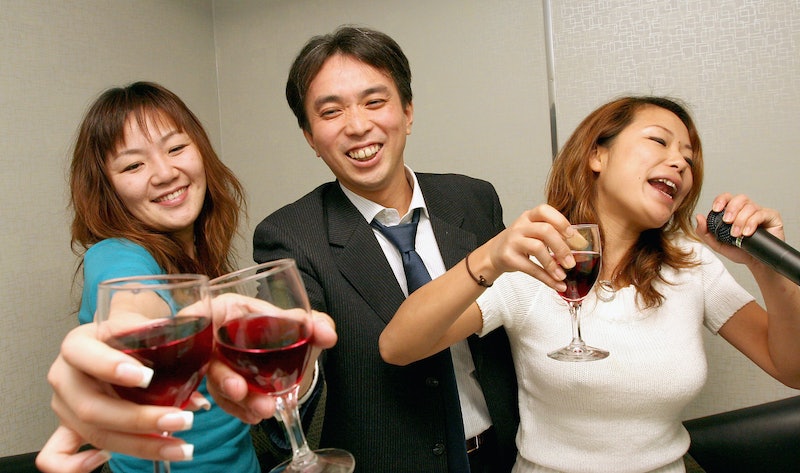 In a world full of basic bitches, it's hard to be a unique flower. There is no better place in the world to make yourself stand out than on a stage. A karaoke stage, to be more specific. Selecting the proper karaoke song is of the utmost importance. In case you have fallen into a rut of endless covers of "Sweet Caroline" and [insert basic karaoke song here], you've come to the right place. I have compiled a list of 27 unique karaoke songs that will wow the crowd and help you step up your karaoke game.

Just a disclaimer: this will be largely influenced by my nostalgia for crappy early '00s pop music and terrible rap so if you have a problem with that, then you may be stuck performing "Pour Some Sugar On Me" for the rest of your weary life.

So grab your drunkest friends, get on that stage, and sing like you've never sung before because the time has come to step up your karaoke game by about 87 notches. You don't have to be a great singer to be a killer karaoke singer; all you need is a catchy song, some complementary dance moves, and pure, unadulterated confidence. Even if you sound like total garbage, if you own it like you're Céline Dion performing in Vegas, the crowd won't be able to help admiring your panache.

You might be a little drunk. You might thinkyou want to sing "Lady Marmalade" with your friends. And you might also think it's a good idea to call dibs on Lil' Kim's verse. You are definitely wrong. You will definitely embarrass yourself. Butyou will entertain the hell out of a crowd and your performance will stand out.

This one has everything you could hope for in a karaoke song. It's not totally played out, it's chock full of early '00s nostalgia, and you can really get sassy and have fun with this one.

You might think this one would be a Debbie Downer but if you've got the swagger like I do, it'll be a crowd pleasure for sure.

The best part about this song is that you get to sing all of the background vocals too (all the soulful JT "ooooh yeahhhh"s and "uh huh"s), as well as the dope Nelly verse. This is also perfect for challenging someone to a rap battle, if you feel so compelled.

This is some next level karaoke ish and if you can pull off this sick flow with those tongue-twisting lyrics, you are sure to earn the respect of your audience.

"I Believe In A Thing Called Love"- The Darkness

This one takes some serious guts (or about 15 shots of tequila).

This one will get the party started and you'll earn mad respect if you can pull of the Spanish and the Portuguese in this song.

Because before we had 'bae,' we had 'boo' and we must always our roots.

Make sure you have someone raspy to chime in for the Lil' John parts. You can dedicate this one to the chica throwin' shade at you from across the bar (just kidding, violence is never the answer).

I loved this song as a kid and was appalled to realize a few years ago that it's actually about dancefloor boners. Yep, this is an ode to erections. Therefore, this obviously makes the most hilarious karaoke song ever.

This one will bring the crowd to tears.

In high school, I was on the Talent Show Committee (big deal, I know) and one girl auditioned and sang this song a capella... it was a struggle of epic proportions, to put it mildly. This one is an advanced expert level karaoke song but if you can pull it off, you will wow the crowd like nobody's business.

This one will force your crowd to take a walk down memory lane back to their days of pucca shell necklaces and scrunchie shirts as they reminisce on their first slow dance at the 6th grade dance.

When you're trying to get your reggae on.

No one gets the club turned up like Michael Bolton.

People can't avoid standing up to get crunk to this one.

"Spice Up Your Life"- Spice Girls

If your goal is to offend the entire crowd to a moderate degree, this is the perfect song for you.

For when you're having one of those nights where you're feeling particularly angsty.

The first time I ever did karaoke, we requested this song. The lady misunderstood and put on "Ignition," the original. In case you haven't heard the orginal version, it kinda sucks and we were nearly booed off stage before the proper version was put on. Our rendition was on fiyahhhh after that.

For when you're trying to spice it up with some Latin flavor.

If you do this one, you have to include the dope choreography from the music video.

Gather your whiniest four girlfriends and get ready for the boy band tribute of the decade.

"Candy Shop" is pretty great in the 50 Cent rendition but to perform it in the vocal stylings of Dan Finnerty & The Dan Band a la The Hangover, your karaoke tribute is sure to be a crowd pleaser.

Okay, so this one might be just a touch basic but it's easy to sing and it's freaking Miley.