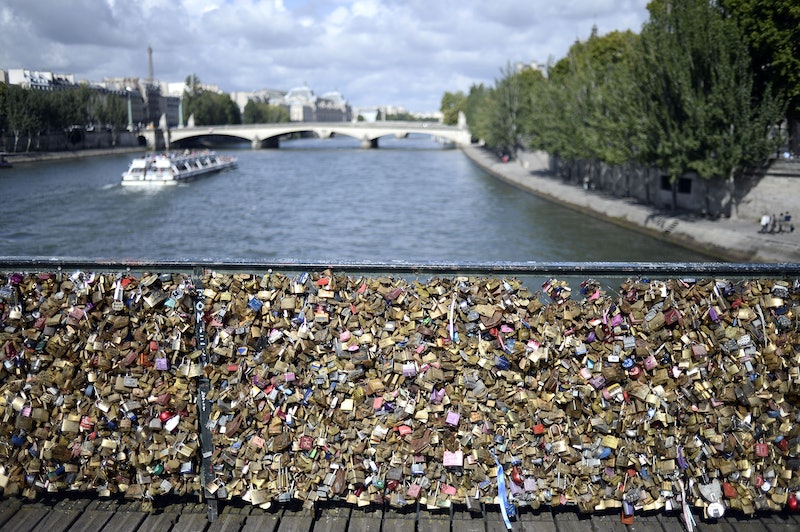 When you're in love, you can burn through hundreds of ideas for how to say it, or show it, or have it felt. Some might settle for the everyday options, flowers and the like, while others might reach for slightly more evocative, symbolic solutions — naming a star after someone, perhaps? And, of course, some people clamp initialed padlocks onto a bridge in France, symbolizing their strong, unbreakable love. Or, rather, some people did do that, and they won't be able to much longer — Paris is removing the "love locks" from sides of the Pont des Arts bridge, meaning all those permanent monuments to love were... not so permanent.

Make no mistake, there are very good reasons why Paris officials want the love locks gone. In the first place — and most trivially, perhaps — they're kind of ugly looking, at least collectively. But even further, officials are concerned about the safety implications of the padlocks. According to CNN, the additional weight entirely thanks to the locks — 700,000 or so, they say — is the equivalent of approximately 20 elephants. It's caused the bridge to deteriorate quicker than anticipated, which is a very good reason for what Paris Mayor Anne Hidalgo termed "an unprecedented artistic invention," according to Forbes.

According to the Los Angeles Times, Paris city hall released a statement on the matter, framing the situation squarely as a safety issue.

This phenomenon generates two problems: a lasting degradation of the heritage of Paris and also a risk to the safety of visitors, Parisians and tourists.

Now, this may come as bad news to some people, especially if they had locks on the bridge. But rest assured, however disappointing it may sound — your love isn't measured by how long you kept a lock around a metal grate someplace (or, more likely a lock on top of another lock, at this point). The love's in the feels, the caring, closeness and warmth that made you want to put the lock there in the first place. That's the heart, right there.

Nevertheless, there are doubtless going to be people very upset my this, especially considering the decision will go beyond just the famed Pont des Arts bridge. Similar projects are planned to remove similar locks from other tourist sites around Paris, and on the Pont des Arts at least, there will be no room for tomfoolery afterwards — the grated metal sides will be replaced with plexiglass, making love locks all but impossible to attach.