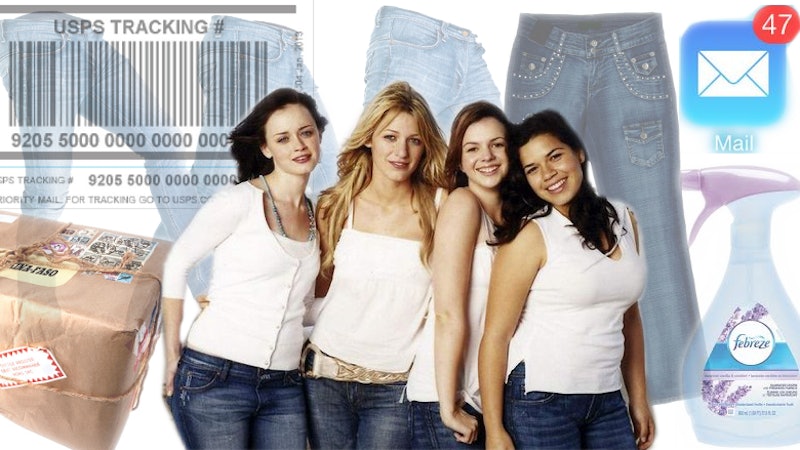 According to The Sisterhood Of The Traveling Pants movies, every sisterhood needs rules — even ones centered around sharing a so-called magic pair of jeans via snail mail. While sisterhoods are forever, the rules from the 2005 movie (and the book its based on by Anne Brashares) could use some updating. In honor of the 10th anniversary of The Sisterhood Of The Traveling Pants, I've given the rules the 2015 treatment. Because every sisterhood will always need rules and no one really sends snail mail letters anymore.

The Sisterhood Of The Traveling Pants follows the summer adventures of BFFs Tibby (Amber Tamblyn), Lena (Alexis Bledel), Bridget (Blake Lively), and Carmen (America Ferrera). The gals have grown up together and right before they depart for their first summer apart from each other, they stumble upon a magical pair of jeans that fits each of their body types. They dub themselves the sisterhood of these pants and establish rules for keeping in touch over the summer, so they won't lose touch. Now, remember that this is 2005, when wall-to-wall communication on Facebook was very basic and the rest of social media was a mere glimmer in the eyes of the founders of Instagram, Twitter, and Snapchat.

Here are what I think today's rules whould consist of for a 2015 Sisterhood Of The Traveling Pants.

Each Sister Keeps The Pants For Two Weeks

Original rule: Each sister keeps the pants for a week.

Why two instead of one week? First of all, I don't know about you, but a week is flies by in an instant. I feel like I blink and suddenly it's Monday all over again. Plus, it takes a little bit to get comfortable in jeans. Also, who wants to keep going to the post office to mail an envelope filled with jeans back and forth every minute? The post office is so miserable (even with those automated machines). The less time spent there, the better.

Two weeks gives the sisters enough time to adjust to the jeans, live their lives without running to the post office every minute, and it's also enough time for the pants to reach all of them over the course of the season — if the post office does their job.

The Pants Must Be Sent With A Tracking Number & Insured

Original rule: None. I made this one up based on bad experiences with the post office.

If they must mail the pants back and forth, the gang better do it right. Pro-tip: Always opt for the tracking number and insurance, only if it's something special. I've had packages stolen from me, lost, magically found, and stolen from. And if any of that happens, well, the USPS can't really help unless that tracking number is on there. If the package is insured, they'll take the case even more seriously.

No Wiping Snot (Or Anything Else) On The Pants

Original rule: No picking your nose while wearing the pants.

Look, when you gotta pick, you gotta pick. But you can choose where to deposit your pickings. This rule should also be applied to wiping the residue of any foodstuffs consumed or anything else, since the pants are never to be washed. Ew.

While Sending The Pants, The Sender Will Update The Group E-mail Chain About The Most Exciting Thing That Happened While Wearing Them

Original rule: While sending the pants, write a letter detailing the most exciting thing that happened while wearing them.

The art of letter writing is dead. We killed it with the internet. And I'll admit sometimes it still lives on. I still write thank-you cards, but thanks to snail mail, it always arrives a month late. To speed up this process, the sender will update the group chain e-mail about her experiences in the pants. I may be old school in making this an e-mail rather than Instagram, Snapchat, Text, Gchat or Twitter, but come on, some things need more than 140 characters.

Freeze Or Fabreeze The Jeans

Original rule: We will never ever wash these pants.

This rule always grossed out everyone — myself included. Worn-too-many-times jeans smell bad and they feel gross, but it's actually not as bad as one would think. One man didn't wash jeans he wore nearly every day for 15 months and the bacteria levels were pretty normal and not higher than someone wearing clean jeans. But he wasn't sharing jeans with three other teen girls.

Some folks think that you can freeze jeans in order to kill bacteria. And to kill any odors? Well, Fabreeze always seems to works.