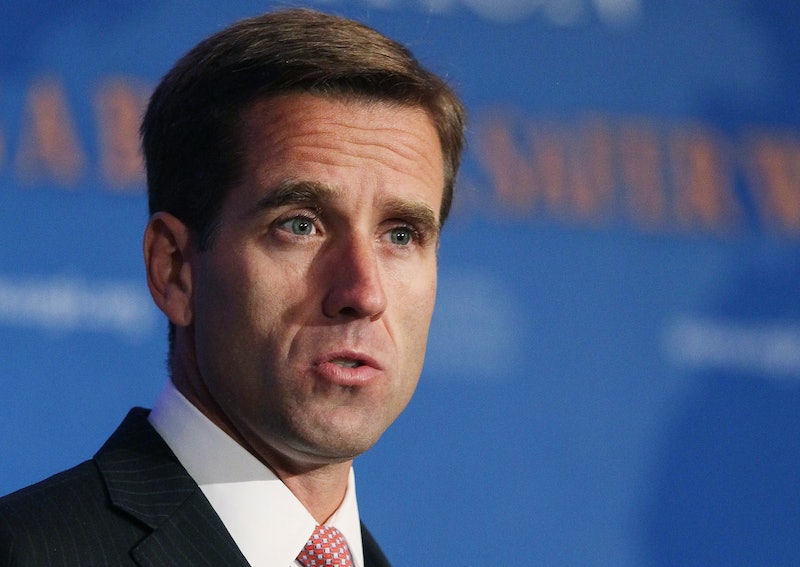 On Saturday, Vice President Joe Biden announced the news that his son, Beau Biden, had died of brain cancer. The younger Biden, whose full name was Joseph R. Biden III, was only 46, and had spent over a week receiving treatment in hospital before his death. Biden had served as attorney general of Delaware and was described in his father’s statement as “the finest man any of us have ever known.” Tributes began pouring in from across the political spectrum as soon as the news was announced. Democratic presidential candidate and friend of the family Hillary Clinton offered her heartfelt condolences in a statement issued overnight.

“My heart is broken for the family of Beau Biden — a wonderful man who served his country with devotion and lived his life with courage,” Clinton tweeted overnight. The rest of the Clinton clan also paid their respects publicly on social media, with former president Bill adding in an extra message of support from his better half. “Hillary & I mourn the loss of Beau Biden,” his tweet read: “so full of life, love, honor, and service — and we pray for the strength of his wonderful family.” Chelsea Clinton, the couple’s only child, paid her respects in a similar fashion, offering her “thoughts & prayers” after the “tragic” event.

Hillary Clinton and Joe Biden have a close and long-standing relationship, albeit one that is currently somewhat complicated by a potential 2016 face-off in the primaries. As The New York Times noted in 2013, “Mr. Biden and Mrs. Clinton have enjoyed a genuine friendship starting in the first days of her husband’s presidential administration.” Despite occasional political awkwardness, their friendship — begun during the 1992 presidential campaign — has remained strong. As a Biden aide told The Guardian this year, “[Biden] and Hillary have been friends for a long time.”

That level of connection to the Biden family is evident in Clinton’s simple but poignant message of condolence. The reference to Beau Biden’s “courage” is a particular pertinent and sensitive point. Beau, who served a year-long tour in Iraq, suffered a small stroke in 2010. He was diagnosed with brain cancer in August 2013. That year, after suffering disorientation and weakness, he went through a surgical procedure at MD Anderson Cancer Center at the University of Texas in Houston to have a lesion removed from his brain. The surgery was followed by radiation treatment and chemotherapy. By November 2013, Beau was deemed cancer-free.

Trained as a lawyer, he served two terms as Delaware’s attorney general. In 2014, he announced he would not run for re-election — setting his sights instead on a bid for governor in 2016. The New York Times reports that Delaware politicians remained under the impression that Beau would go through with that campaign as late as February 2015. As well as being close to his father in terms of his political career, the younger Biden had spoken warmly of the loving relationship between father and son. “We, not the Senate, were all he cared about,” Beau said, in a speech introducing Biden to the Democratic National Convention in 2008.

And clearly, many other people cared about Beau. The Clintons’ tweets expressing grief and support join a deluge of condolence messages that the Bidens received overnight. The White House weighed in early on, and the Obamas' words have been joined by messages from the likes of Jeb Bush, Liz Cheney, Bobby Jindall, Rand Paul, Lindsey Graham, and Harry Reid.