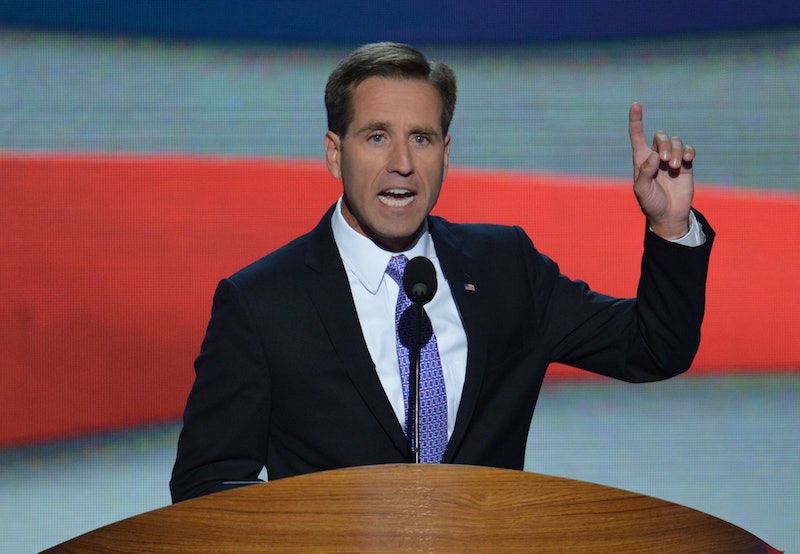 The American public has rallied to support the Biden family after Beau Biden, son of Vice President Joe Biden, died, the family announced Saturday night. Joseph Robinette “Beau” Biden III spent years fighting brain cancer, and his father announced his death in a statement. Biden, 46, was notable for many more reasons than the fact that he was the vice president's son. He had a successful personal and professional life of his own, and there are quite a few tidbits the general public probably didn't know.

Biden suffered a mild stroke in 2010, according to USA Today. Later that year, he considered running for his father's former US Senate seat, but decided not to in order to pursue a second term as attorney general of Delaware. Six months after his stroke, he won that race and continued his own political career.

Three years later, surgeons removed a small lesion from Biden's brain at the University of Texas MD Anderson Cancer Center in Houston. Biden was admitted in August 2013 after feeling disoriented and weak, according to The New York Times. In May of this year, he received treatment at the Walter Reed National Military Medical Center in Washington for more than a week before passing away. The Biden family has kept most of the details private, but are open about his character and courage.

Biden leaves behind his wife, Hallie, and two children, Natalie and Hunter. The Biden family previously faced tragedy in 1972 when Vice President Biden's first wife and infant daughter were killed in a car accident. Beau and his brother Hunter were in the accident but survived, according to The New York Daily News. In the public eye, it might seem like he is best known for being the son of the vice president, but Biden had his own powerful legacy. Here are eight other things you never knew about the vice president's eldest son:

He Was A Gay And Transgender Rights Supporter

Biden was a supporter of marriage equality and transgender civil rights. Equality Delaware released a video in which he said, "I support providing protections from violence and discrimination based on gender identity and expression under Delaware law." Biden spoke his support of 2013 legislation that would legalize gay marriage in Delaware.

He Stood Up For His Dad's Laugh

During the vice presidential debate, Joe Biden's laughter became a source of news when he chuckled at Paul Ryan's policy plan, and commentators questioned the appropriateness of Biden's behavior. Beau Biden defended him on ABC's This Week:

Anytime folks on the far right are going after my father for smiling too much, that's a victory. My father spoke clearly to the American people about the facts. He did that for 90 minutes straight. This is not about how much my father smiled or how many gallons of water the congressman drank nervously on the stage. It's about talking directly to the American people about very important facts.

Nantucket Was His Family's Special Place

Biden married Hallie Olivere in 2002 on Nantucket Island after proposing there a year earlier. The Biden family has celebrated Thanksgiving on the island for the past 26 years, according to The New York Daily News.

He Was A Military Man

Biden was a major in the Delaware National Guard. He served for one year in Iraq and received a Bronze Star, according to the Associated Press. Biden is entitled to military funeral honors.

Delaware Flags Are Flying At Half-Staff

Delaware Governor Jack Markell has directed that US and Delaware flags be flown at half-staff, according to USA Today. Markell tweeted his devastation Saturday night and said in a statement, "I feel privileged to have served with him and Delaware is a better place thanks to him."

He Was Considered A "Rock Star"

New Castle County Executive Tom Gordon, a longtime political ally of the Biden family, told the Associated Press, "He was a rock star. He had a great image, great character." Gordon says he last spoke to Biden several weeks ago on a conference call about crime prevention and said Biden was the most popular politician in Delaware.

He Introduced His Father At The Democratic National Convention

Biden gave a heartwarming speech about his father at the 2008 Democratic National Convention. He described what it was like to be raised by Joe Biden as a single parent before he remarried five years later and mentioned that his father almost didn't become a senator in order to be a better parent: "[My father] said, 'Delaware can get another senator, but my boys can't get another father.'"

He Was The Best Man The Biden Family Knew

His absolute honor made him a role model for our family. Beau embodied my father's saying that a parent knows success when his child turns out better than he did. In the words of the Biden family: Beau Biden was, quite simply, the finest man any of us have ever known.