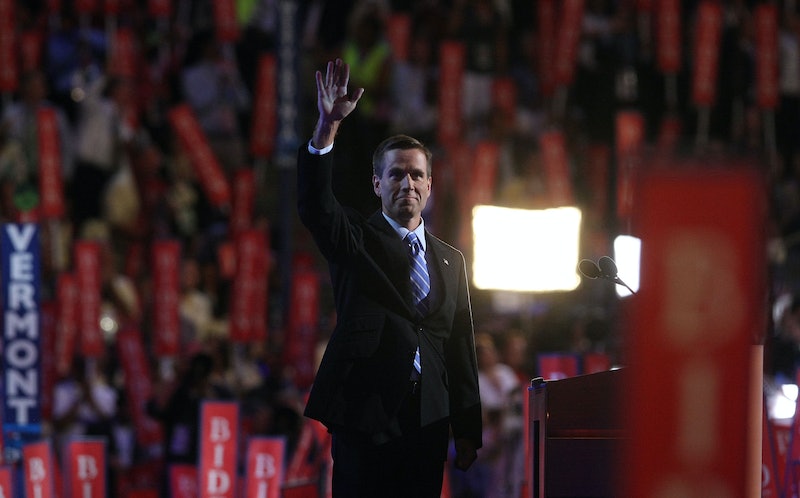 Vice President Joe Biden had a painful task to carry out Saturday: In a parent’s nightmare scenario, Biden had to tell the world that his eldest son, Joseph Robinette Biden III (better known as Beau), had died. By now, the death of Beau Biden has prompted an outpouring of love and support for the Biden family, and kind words for Beau — a man who was clearly cherished at a personal level and respected for his professional achievements. Plenty of heart-warming and poignant things have been said about Beau Biden since he passed away, but a dig through Beau Biden's most moving quotes reveals he had many profound words to share himself.

Beau was only 46 when he died, of brain cancer, but he had lived his life at his father’s side, in the public eye — with plenty of opportunity to make public statements. Having studied law, Beau joined the Delaware National Guard and ended up serving in Iraq for a year. After years working with the US Justice Department, he served two terms as Delaware’s attorney general. Beau seemed set to follow Joe Biden into the national political arena, and many expected him to gun for his dad’s Senate seat after 2008 — but he remained committed to his attorney general duties. Last year, he announced that instead of seeking re-election he would focus on a gubernatorial bid. But ongoing health issues plagued him.

In the wake of his tragically early demise, here’s a brief glance back at some of Beau Biden’s public statements — which testify to his strength of character and his caring nature. Several of these quotes are spoken in relation to Joe Biden, America’s vice president and Beau’s father, whom he proudly and vocally supported throughout his life.

On His Dad’s Courage In Adversity

At the 2008 Democratic Convention in Denver, Beau made a stirring speech to introduce his father, Vice President Joe Biden. Speaking emotionally of an early tragedy — the death of Joe’s first wife and daughter in a car crash that also seriously injured a young Beau, just before Joe was sworn into the Senate — the younger Biden honored his father’s strength and commitment. “We, not the Senate, were all he cared about,” he said. “As a single parent, he decided to be there to put us to bed, to be there when we woke from a bad dream, to make us breakfast, so he'd travel to and from Washington, four hours a day.”

On His Army Service And America’s Strength

During his address to the 2012 Democratic Convention, Biden again cast his father as his hero. He also championed the cause of America’s veterans and recalled a specific moment from his time serving in Iraq — when Joe Biden was visiting the troops. “As he led those new Americans through the oath of citizenship, this celebration of democracy in the land of a deposed dictator, I was struck by the strength and diversity of our country,” Beau said. “I was reminded why we as a nation are stronger when everybody has a chance to do their part.”

Joe Biden vacated a Senate seat in 2008, when he was sworn in as vice president. Many believed Beau would jump at the chance to pursue the seat, but he demurred — choosing instead to focus on his duties as Delaware’s attorney general. Of the way the battle for the Senate seat eventually played out, Beau simply said: “I have no regrets.”

Beau was always cautious when discussing his own plans for the future — understandable for a man whose potential White House aspirations were the subject of Democratic gossip. “Sometimes, it's not good to look too far down the road,” he told reporters, in response to queries about his future ambitions during his campaign to become attorney general in 2006.

When he declined to run for the Senate seat, he put his decision down to duty (he was in the middle of overseeing a major child molestation case, as attorney general). “I have a duty to fulfill as attorney general, and the immediate need to focus on a case of great consequence,” he said. “And that is what I must do.”

Beau suffered a minor stroke in 2010, and was afterwards even more circumspect about how to talk about the future. “Having long-term dreams is a good thing … but having a plan has never worked for me, because life always intervenes,” he told Associated Press, adding that his health worries had encouraged him to spend more time with his family.

On Money And Integrity

In 2008, Beau appeared on The Tonight Show with Jay Leno. When Leno asked why Joe Biden was one of the few senators on Capitol Hill who was not a millionaire, Beau’s answer earned a loud laugh. “I'd say it means he's really honest, but my Mom would say he's really dumb,” he said.

On The Importance Of Family

Beau and his father had politics in common, but family always came first. Asked about what he and Joe Biden talked about usually, in 2010, Beau said politics was not the first port of call. “Most of the drama doesn't come to our dinner table. We talk about what my kids are doing — his grandkids — my brother's three kids, my sister, we talk about the family,” he told CNN. “Most of the time it's not about politics.”