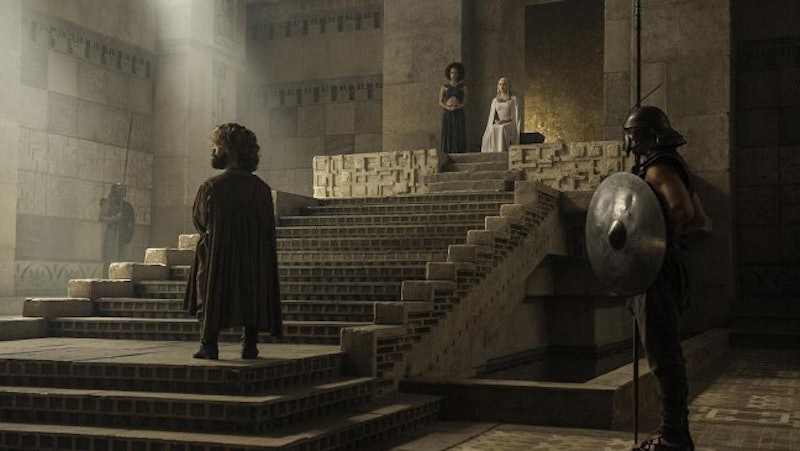 With just a few weeks left to go in Season 5 of Game of Thrones, it's time to kick things up a few notches and move some big plots forward. At this point, one of the most important (and interesting) storylines featured on the show is definitely what's happening in Essos. In case you need your memory jogged, Daenerys is having a bit of a difficult time as Queen of Meereen and now she's got another problem on her hands: the fact that Jorah turned back up with Tyrion Lannister in tow, and the latter wants to form an alliance (while the former just wants forgiveness). But this "problem" could actually turn out to be advantageous. What's going to happen is anyone's guess, but I think we all know that an alliance between the two would probably be the smartest move Dany could make, at this point.

Here's the thing: Tyrion is basically out of options, for one. To return to King's Landing now would surely result in his execution, though it's obvious that this fact is not all that motivates his desire to work with Daenerys. Speaking of Daenerys, she hasn't got much choice either, if you think about it. Being Queen of Meereen might be a fun exercise in ruling, it's only served to waste a whole load of time and hasn't gotten her at all closer to the Iron Throne which she once so desperately sought. It stands to reason that Daenerys and Tyrion's relationship could prove mutually beneficial for a number of reasons, the most important being the fact that success would basically guarantee that the Lannisters would be banished from Westeros once and for all — Tyrion excluded, of course.

Here's why Daenerys and Tyrion could make the fiercest allies ever.

Daenerys Needs To Be Inspired

Dany has proved that she can rule with an iron fist, but what's the point of her staying in Meereen, at this point? It was great to teach her some hard lessons about humility and the limitations of her power, but remaining stagnant across the Narrow Sea will never get her where she wants — and needs — to be. Tyrion's arrival may be enough to light a fire under her again and remind her of her mission.

Tyrion Has Inside Information

A smart warrior never marches in without knowledge, and Tyrion has that knowledge, considering he's an actual Lannister. His information could be used to give Daenerys a tactical advantage if they decide to invade and conquer King's Landing — information she would never have otherwise.

Tyrion might have plenty of information that could lead to the Lannisters' ruin, but he hasn't got the army to actually do anything about it. That's where Daenerys comes in. She runs the Unsullied and they'd march off to battle at her word. Now that's a combination.

Tyrion might be a Lannister in name, but he certainly isn't in principal. The family has done nothing but humiliate him, and it's time he fought back. As for Daenerys, all she knows of the Lannisters is that they were responsible for stealing the throne from her father and ending his life. That seems like enough motivation for both to start a war.

Success Is More Likely Together

As I've said before — both Tyrion and Daenerys have their respective strengths and weaknesses, but combining the two would ensure their success would be more likely. This needs to happen immediately.