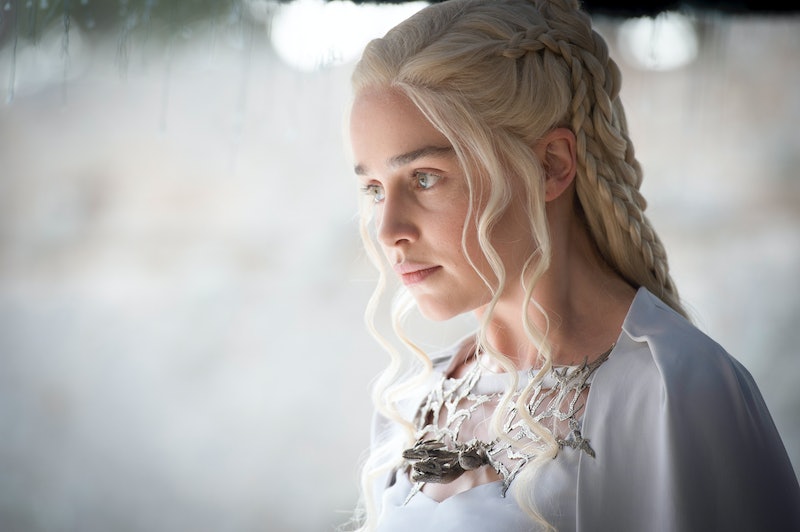 You can go ahead and stop looking ahead in the Song of Ice And Fire books right now: Tyrion at the Game of Thrones books are officially separated and it could mean that Daenerys' books story could change too. In George R. R. Martin's novels, it takes a great deal more journeying and ordeals before Jorah and Tyrion get anywhere close to revealing themselves to Dany: In fact, there's a whole host of other characters who we never even met on the HBO series (hello, Penny the dwarf) that, in the books, are part of this duo's harrowing journey. On TV, there is no Penny and these two come face to face with the mother of dragons in the fighting pits, which means that something has to change.

In the books, Dany opens the fighting pits, and at one point, stops a fight in which Tyrion and his new friend Penny are faux-jousting. The men who run the ring plan to release lions to attack Tyrion and Penny, but Dany stops it. After that, Tyrion and Jorah escape their slaver and work to join a sellsword company in hopes that they'll eventually land on Dany's side. Sure, even with Jorah and Tyrion confronting Dany and giving Tyrion up as a gift for the queen, that fate could still befall them, but there's one major roadblock:

This appears to be a photo taken of Game of Thrones filming during Season 5. That's Tyrion, in some seriously nice duds compared to what he's been wearing all season, sitting with Dany and her betrothed Hizdahr zo Loraq on what appears to a royal viewing area. At the very least, this is going to slow down Tyrion's road to joining a sellsword company.

Then, we can add to this set-up the part where Jorah has contracted greyscale. Things in this section of the Song of Ice And Fire realm are seriously changed by that alone, even before we consider the lack of Penny and the Dany confrontation. Sure the show's writers could just be shaking things up, only to send our duo down sellsword lane after all of this with Dany, but it seems a little strange to put this much effort to make the path different. It would seem that the show is doing another famous Season 5 shake-up.

Then there's the part of this week's episode where Daario asks Dany to change the rules and marry him instead. Sure, there could have been a great emphasis on this scene because watching Michiel Huisman do anything at all is worth every ounce of our attention (or because we're supposed to recognize that for all her power, Dany is still beholden to burdens — like her impending marriage to Hizdahr zo Loraq — brought on by gender). But what if the series is trying to tell us something? What if her fate isn't quite what we think it is? What if Dany isn't about to just hop on a dragon and fly away the way she does in the books? Or if she does, could it be possible that Tyrion is part of the conclusion that no one other than GRRM himself really knows?

These changes certainly beg for the wheels in our brains to start turning: Tyrion and Dany coming face to face in this way is a huge deal. It's only a matter of time until we understand why.