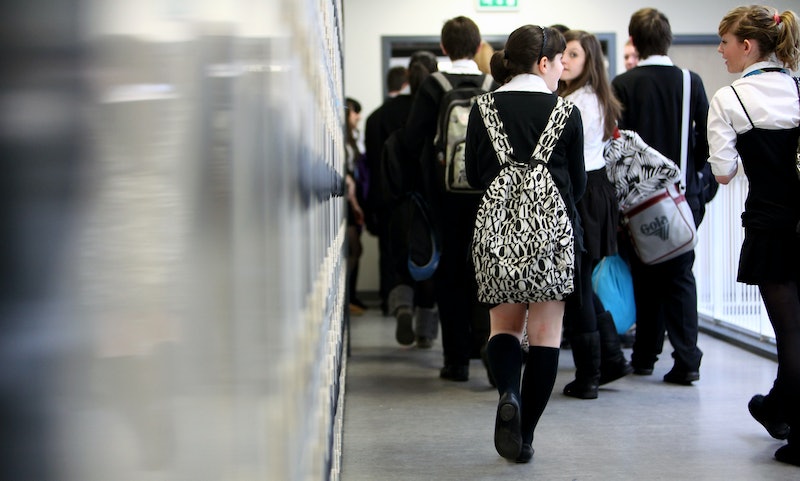 Another day, another dress code debacle. Across the Internet, people are furious over a memo detailing Biglerville High School's dress code, accusing it of sexist and fat-shaming language. Joining the increasing ranks of students publicly denouncing double standards in many school dress codes, Biglerville seniors in Pennsylvania took to social media to express their disgust at the language used in the notice regarding appropriate attire for an upcoming graduation ceremony. According to BuzzFeed, student Brianna Burtop posted a picture of the memo on Facebook to point out the different attitudes toward male and female students.The male dress code merited a mere four bullet points, and aside from a reminder to pull their pants up, it consisted of general advice to wear khakis or nice jeans, as well as a collared shirt. Girls, on the other hand, received a two-paragraph series of instructions that took up a quarter of the page. Choice tidbits include admonishments for girls to "choose modest attire," and to "keep 'the girls' covered and supported," and it only went downhill from there."Please remember as you select an outfit... that we don't want to be looking at 'sausage rolls,'" the memo read, concluding with an admonishment to "remember that you can't put 10 pounds of mud in a 5-pound sack."

After Burtop posted the memo on Facebook, writing that "weight shouldn't be used as comedic relief," hundreds of others chimed in to agree online. "This is ridiculous," reads one comment. "Who in their right mind would write something like this?" asked another. "You can’t talk to women like that in a work place. It’s just totally wrong. It’s totally degrading,” Burtop's mother, Jessica Burtop, told local news outlet WHTM. After local news stations caught wind of the story, the school district said in a statement that they "regret that the document contained some unfortunate word choices," but that they "hope this does not distract from the dignity of the graduation ceremony and the accomplishments of our graduating class."

For her part, Burtop just wants an apology. "I just want the paper changed and for them to apologize to these girls because as 18-year-olds we’re all insecure and impressionable," she told WHTM.

At least Burtop will graduate knowing that she made other students' lives a little easier — as long as the school actually changes the memo. It's your move, Biglerville. Images: Giphy