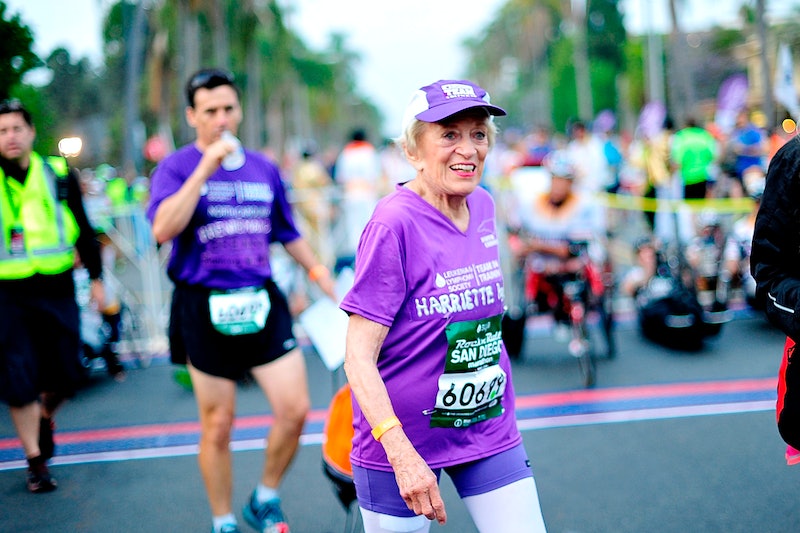 And I thought I had a strenuous morning trying to choose between an everything bagel or cinnamon raisin — Harriette Thompson is competing in San Diego's Rock 'n' Roll Marathon, and probably was at the starting line while I was still half asleep... oh, and did I mention she's 92 years old? The insanely incredible runner is set to become the oldest woman marathoner to ever cross the finish line, which by comparison, makes my little coffee run this morning seem pretty insignificant, indeed.

Becoming the oldest female marathoner in history may seem like a lofty goal — especially for those of us (ahem, me) who haven't engaged in any sort of physical activity in, oh, I don't know, months — but Thompson already has this on lockdown. According to the AP, this is the 16th time Thompson, who hails from Charlotte, North Carolina, has competed in the race, and already set a record last year at 91 years old when she finished the San Diego marathon with an impressive time of seven hours, seven minutes, and 42 seconds, making her the fastest woman her age to ever complete a marathon. Now, a year older, Thompson said at a news conference she isn't sure if she can beat her record — but that's not going to stop her from trying.

Currently, Gladys Burrill holds the record for oldest woman to ever complete a marathon after she finished the 2010 Honolulu Marathon when she was 92 years and 19 days old. Thompson is 92 years and 65 days old. Anyone else having a serious #lifegoals moment right now?

And in case you weren't already impressed (but like come on, of course you're impressed), I should mention that Thompson is also a classical pianist who has performed at a little venue called Carnegie Hall on three different occasions, not to mention she's overcome cancer twice and a staph infection in her legs to compete. In other words, there's nothing this woman can't do. Stride on, Harriette. Stride on.